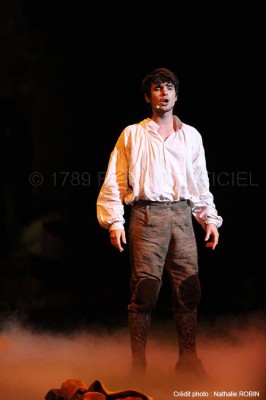 PARIS: We are following up with one of this autumns big musical succes´s in Paris: 1789 Les Amantas de la Bastille. Which is still going strong at Palais des Sports. It is keeping the high standard, and fully houses are leaving the theatre with a good feeling after the performances.

The details, musicality, the whole show is swinging, and it is in deed a pleasure to see with the elegance, drama, and beauty the artists are managing their job in the brilliant staging and choreographing made by the outstanding Giuliano Peparini.

GIULIANO PEPARINI who is the director and choreographer of 1789, has managed to make it a lively musical production, where the choreography is jumping naturally out of the history, furthermore the good cutting between the sequences is very well made, so i have the feeling that i am anjoying a live motion picture production, absolutely wonderful made. 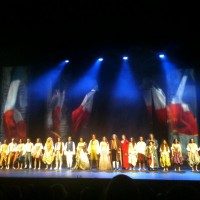 The show is taking the audience back to a time when a whole generation of people dreamt of changing the face of the world : the quintessential period of the French Revolution, from spring 1789 to August 26th 1789, date of the Declaration of the Rights of Man and of the Citizen.

As usually, a love story: Both our heroes live worlds apart. He, a young revolutionary peasant, she, one of Queen Marie-Antoinette’s maids of honour, will love one another passionately, until the dawn of a new world, full of promises of Freedom and fraternity between men. Bestween two lovely young singing artist, “THE VOICE” finalist Louis Delort as Ronan, the young revolutionary peasant, and she Camille Lou as Olympe, the Queens maid of honour. Furthermore Nathalia as Ronan´s sister Solène. They sing and play well, and we trust in the characters they are presenting, which is importent for the honesty in the history
. 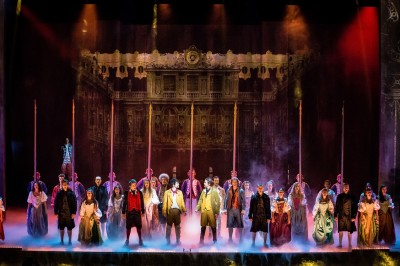 1789 Soloists an ensemble in the court yard of Versailles, visualized as in a moving picture at Palais des Sports, Paris. Foto: Gautier Pallancher.

This love story between Ronan and Olympe, a pure work of fiction, will interact with History. Thus will our two heroes live to meet King Louis XVI, Roxane Le Texier is outstanding as Marie Antoinette, Mirabeau, David Ban great as Danton,  Matthieu Carnot as Lazare, Rod Jaines brilliant as Camille Desmoulins,  Sébastian Agius as Robespierre,  and other Heroes of the Great Revolution. 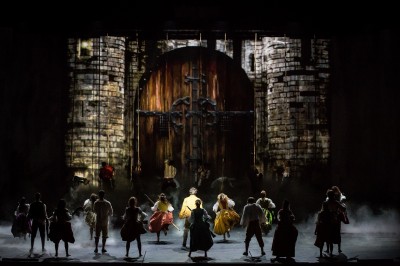 Fantastic movie picture sceneries are shown in front of the Bastille on the wide stage at Palais des Sports. Foto Gautier Pallancher

As in the musical Les Miserables the composers has also puy in a humoristic couple, in this case three guys who accompagned of  opplifted “funny” music are lighting up the seriouse and some times very dramatic story. The trio is elegantly leaded, acrobated and sung by the virtuose Yamin Dib plays Auguste Ramard, Le Mouchard.

Forty years later, as a worthy successor, Victor Hugo will write « les Misérables » to defend the common people and the oppressed. 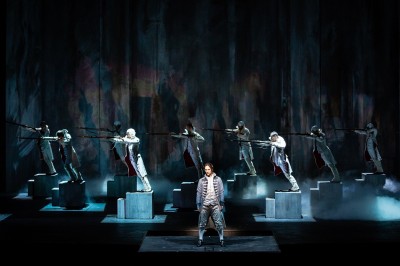 A line of good musical singers are heading the main roles: http://www.1789lesamantsdelabastille.fr/en/chanteurs/ 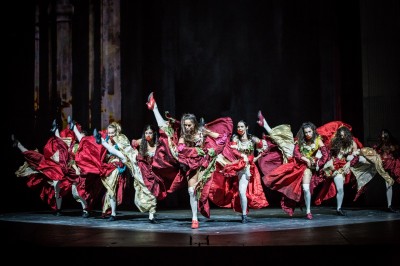 They are reffered to as the “Fabulous 5”. Rod Janois, Jean-Pierre Pilot, Olivier Schultheis, William Rousseau and Dove Attia are now indeed a proven team. Even though all these composers have their own personal careers with collaborations, successes, and experiences at the highest level, they still composed most of « Mozart the Rock Opera » songs together
. Forming a close-knit small community of musicians they join again to compose this time the songs for « 1789, les amants de la bastille »

. The musical atmosphere is that of melodious pop music tainted with a touch of electro and urban rhythms. An atmosphere that will reflect perfectly the theme of the show bringing it up to date. 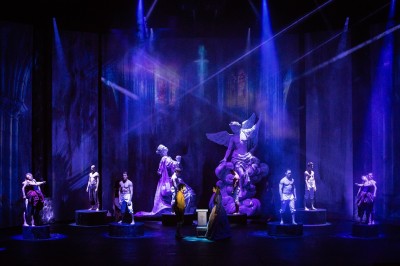 Louise Delort as Ronan and Camille Lou as Olympe in the church, surronded by choreographic sculptures. Foto Gautier Pallancher