Maestro Alessandro De Marchi and Monteverdi at the Opera in Oslo

OSLO/NORWAY: The Oslo opera audience are privilliged as the great barock opera maestro Alessandro De Marchi is back in Oslo conducting Claudio Monteverdis opera Ulysses is returning home, as De Marchi did when it in 2012 was premiered at Scene 2, but this time at the Main stage. It is presented in an arrangement by De Marchi, where he is also including music by Francesco Cavalli: Sonata a 12
. It is a great production by Ole Anders Tandberg

DYSFUNCTION (ED)Communication How long does cialis take to work?.

In the leding roles we are privilliged to Kressimir Spicer, tenor, outstanding singing and amusing, in the title role. His wife, Penelope, is this time sung by Christine Rice, with a beautiful mezzo voice.,

His son Telemakos, is this time sung by the famouse international, but with Oslo residence countertenor David Hansen, who in 2012 sung Pisandro, – the other counter tenor role in Ulysses, this time is the Pisandro role taken over by the brilliant countertenor Hagen Matzeit, that we do know well from his participating in Il Germanico together with David Hansen and cnducted by De Marcchi this summer in Innsbruck. In this we are privilliged to have the posibility to enjoy two of the worlds best countenors in Oslo
. David Hansen and Hagen Matzeit.

In other roles we had the pleasure of an amusing Andrew Harris as the Time/Neptun. Ann-Beth Solvang was lovely as Fortuna/Minerva, and Kari Ulfsnes Kleiven brilliant as Amor/Juno, and last but not least Ingebjørg Kosmo unrecognizable as Evrykleia.

The interesting interior to a dining hall with a stage behind, where we got all the small narrative performances, in the performance, elegantly staged and with all the scenographic stage equipment that the Operahouse hase, is made by the scenographer Erlend Birkeland. Lightdesign Ellen Ruge and costumes by Maria Geber. 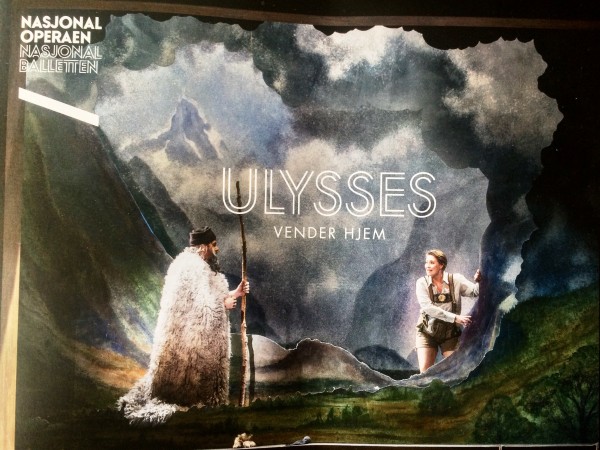 The barock orchestra sounded great, with many original barock instruments, and outstanding instrumentalists, who know their handwork, and it gives the norwegian audience the seldom posibility to go deeper in to barock opera, who during the last many years, specially in more central parts of Europe (than Norway) is a big hit, and by the posibility to get one of the worlds outstanding experts in this field Alessandro De Marchi and thwo of the leading countertenors to partcipate, is this giving the Oslo audience an extraordinary posibility to listen to outstanding Barock opera
. It was good to see that the big hall was nearly filled up, and the audience enjoyed it.

Please also enjoy our review of Il Germanico, from Alte Music Festival in Innsbruck this summer at: http://www.kulturkompasset.com/2015/09/01/il-germanico-in-innsbruck-drama-with-happy-ending/