By Henning Høholt on 4/10/15 • Categorized as Uncategorized

PARIS/FRANCE: It was one of the real festivitas evenings at Theatre des Champs Elysees 31. March 2015, when BALTIC SEA YOUTH PHILHARMONIC led by its founder Kristian Järvi, for the first time, concerted in PARIS.

Baltic Youth Symphoni Orchestra in Paris, in the center its conductor and founder Kristian Järvi

5 mg/mL in water and a molecular weight of 666. sildenafil bestellen • Erectile dysfunction (ED) is common, affecting 10% of.

In dog, heart rate was moderately increased in all studies, with no consistent changes in blood pressure. buy viagra online every effort should be made to involve the patient’s.

sexual performance are common contributing factors to cialis from canada medical community that erectile dysfunction is a part of.

A large audience enjoyd a program, that BYP has called “On a Baltic Voyage”, presenting one musical number from each of the countries they are in contact with around the Baltic Sea, and of course also including this years two 150 years birthday celebrating componists Carl Nielsen, Denmark and Jean Sibelius, Finland.

With the presence of a lot of ambassadors from the involved countries, the orchestra presented the following program:

It all opened brilliant with Beethoven, followed by Sibelius extraits from Karelia Suite, then to the Polish composer Kilar with a strange minimalistic repetitive sound, that reminded me of the idea of Ravels famouse Bolero, but in Kilars own way. And it showed an other side of the orchestra

After Stenhammer and Carl Nielsens very much in the sam kind of mood, The roof lifted in the entustiastic applause after Edvard Griegs wonderfull Marche Triomphale from Sigurd Jorsalfarm this was a highlight of the concert
. The same was Rimski-Korsakovs wellknown and demanding Capricio espagnol. And then we went in the much more sensitive and pianissimo format by Arvo Pärt´s beautiful Cantus in Memorian of Benjamin Britten. After this contrast came another contrast Gelgotas interesting piece Never Ignore the Cosmic Ocean, with violin solo, nearly as a small violin concerto and with text by all the orchestra and the violin soloist.

Violinsoloist, that we, unfrtunately don´t know the name of together with Kristian Järvi, in front of the orchestra, after Gelgotas piece: Never Ignore the Cosmic Ocean. Foto Henning Høholt

It was all rounded of by Kalmins Rock Symphony the Allegretto part.

But it didn´t end with that, we got alot of encores, Händel in a show piece arrangement, Tchaikovskij, A Folcloristic piece, whoch could have been swedish.

A very representative evening with a first class young orchestra, presenteing a lot of outstanding young musicians from all the area, and with very many really good soloists, in a great atmosphaere. All inspired by the dancing leader Kristian Järvi. 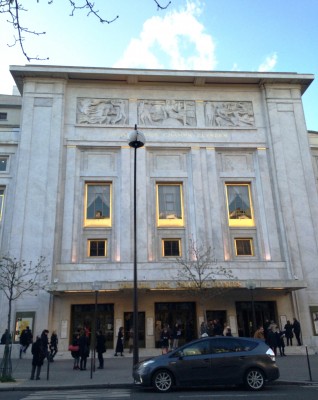 The BALTIC SEA YOUTH PHILHARMONIC. Founded in the late 2000s, the Baltic Sea Youth Philharmonic brings together hundreds of young musicians, all from the shores of this inland sea of Europe, from Germany to Latvia, a dozen countries, all welded one idea: bring on stage the communities that the vagaries of history have sometimes separated, all under the leadership of the founder, Kristjan Järvi, a real diver, Neeme the father and brother Paavo, Estonian dynasty of the stick, as agile on stage that Travolta in full fever than ready to break all the boundaries between genres without fear of rubbing neither create nor to pop. But this is a rather leisurely cruise that invites us this time, Germany Brahms Russia Shostakovich, sailing from Poland to the Faroe Islands, passing over some music stops by Scandinavia and the Baltic States.