BEAUJOLAIS NOUVEAU HAS ARRIVED – once again. 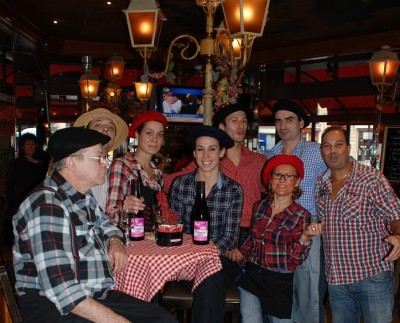 The welcoming staff at Café Royal Opera, is ready to serve you the Beaujolais Nouveau. Photo: Henning Høholt

PARIS: The french restaurant business is having an extra celebration these days, as the New Beaujolais has arrived, and this is a  welcome possibility to have fun.

We have visited one of the most popular and celebre café´s in the very centre of Paris: Café Royal Opera at the corner of the famouse Avenue de l´Opera and Rue des Pyramides, only two minutes from Louvre, where Louvre iss meeting the Tuilleries Garden, and where the Jean d´Arc statue is making the entrance from Louvre to Rue des Pyramides.

As this is one of the very centrale located Cafe´s in the very heart of Paris, two minutes also from Palais Royal and Comédie Francaise, it is a popular lunch, brunch, dinner place for all the neighboorhood and for plenty of tourists from all over the world, It even has meny´s printed in many international languages, inclusive Japanese, Russian, Spanish, English German, French  aso,  and many of the staff speaks these language. The meny is outstanding the portions generouse and of high quality, the staff first class. Really a home in the center of Paris. And still at a normal Paris price level.

It’s Beaujolais Nouveau Time
Beaujolais Nouveau is an easy to drink fruity red wine which has a purple-pink colour which should be enjoyed as early as possible while it is still fruity and fresh. Every year in beginning of November at one minute past midnight there is a race to be the first to serve and consume the new batch of Beaujolais. Join the race to own the best Beaujolais Nouveau.

The years ‘new’ Beaujolais wines are raced from the towns and villages of the Beaujolais region in France towards Paris. The tradition in Paris is for banners reading Le Beaujolais Nouveau est arrivé!are hung. The traditionalal banners proclaiming the good news is one of the most frivolous customs withinh the wine world. 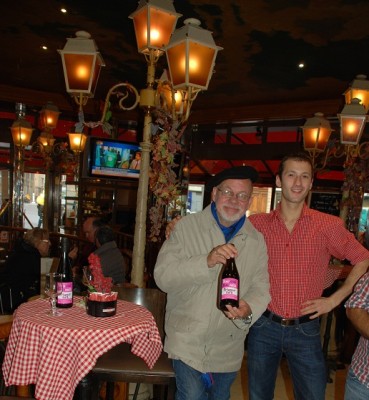 This young red wine bottled just 6-8 weeks after the grapes are hand-picked is an incredibly popular wine (especially in America) because Beaujolais Nouveau is very similar to white wine meaning that the wine can be gluged as opposed to being sipped like red wine during the festive period following its release on the November 3rd. 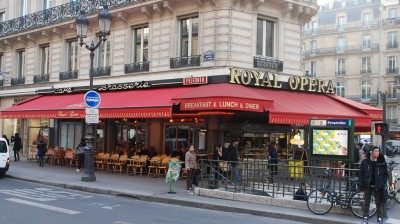 Apart From Tradition What Makes Beaujolais Nouveau So Exciting?

Like many of you, we’re always looking for new ways (or should that be excuses) to enjoy a glass of Beaujolais wine. Last week I happened to run into Des Walker in a UK wine bar, no doubt drinking some of the proceeds from his recent appearance in the Paddy Power free bet TV ads. Anyway, Des mentioned that he has taken to enjoying a glass of red in his hot tub just before going to bed. I’m not sure if anyone else is doing this, or if there are any applicable health benefits, however it does seem like a new way to enjoy a drop, so I might give it a try myself
. And yes, I need a hot tub first!

Secondly, I’d just like to draw your attention towards the other Beaujolais wines that we feature here on the site
. Although Nouveau is often the most popular and best known variety, lately I’ve developed a taste for Moulin a Vent which goes really well with steak or lamb dishes
. If you can’t wait until the next batch of nouveau is released, then why not give it a try in the meantime?