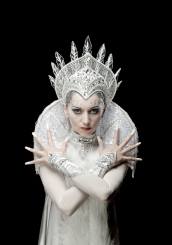 VILNIUS/LITHUANIA: The Snow Queen by Michael Corder with Sergei Prokofiev´s music arranged by Julian Philips, was repremiered with the Lithuanian National Ballet in Vilnius 22. October with the beautiful and virtuose primaballerina Olga Konosenko in the titelrole. Her long demanding solo in second act was extraordinary good.

The young lovely couple, Genadij Zukovskij  and Kristina Gudziunaite as Kay and Gerda, are the centre in the fairy tale, and it is their history about their friendship, love, and their red and white roses in their balcony gardens it is all about.  For the repremiere they have been growing a lot in their roles and their dance and their presentation was even more beautiful and wellformed, and with an even better energy, than in May. They makes that we trust in the tale,

I am pleased to notice that Corder is famously a man who never runs out of steps, and it’s a pleasure to see the ease with which his ­choreography powers through this ballet’s three acts, from the icily bevelled movement of the Snow Queen, Olga Konosenko, to the flushed and dreamy dancing of little Gerda, Kristina Gudziunaité, in love. 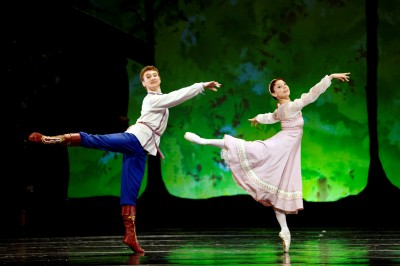 The young lovely couple, Genadij Zukovskij as Kay and Kristina Gudziunaite as Gerda, at the repremiere they have been growing and their dance was even more beautiful and expressive than in May. They makes that we trust in the tale. Foto: Martynas Aleksa

moments, the ­dancing is a blinding blizzard of energy, as the Queen’s courtiers spin in cutting ­formations around the bewildered girl, then abruptly the space clears to become a duel of wills, the queen swooping down from a high lift ready to drive Gerda from her path, – in the penultimate scene, where Gerda arrives at the Snow Queen’s palace. This kind of details shows Corder’s talent for ­choreographing a ballet stage. It is like the Snow Queen is flying, thank to her good tall wolves, Martynas Rimeikis (in 1st act), Gediminis Bubelis (in 2 and 3,act)  and Ernestas Barcaitis (in all 3acts).

With special pleasure I enjoyed the gipsy groups, leaded by the two young outstanding soloists the leading Gypsy Girl – Anastasia Cumakova, who showed an extraordinary expression, and her Gypsy Boy – Zilvinas Beniusevicius, brilliant in his long solo, I was also specially impressed by the energetic whole group of male gipsy dancers, who have taken the choreographers demanging challenge, they did a great inspired job. 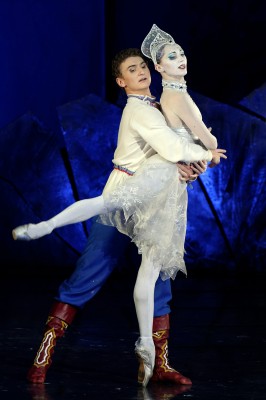 The two sweet foxes were danced on Friday by Maja Dolidze and Julija Turkina  The sweet handsome Reindeer was danced by Voicechas Zuromskas, who has a demanding job with a lot of difficult feetwork in his pas de deux with Gerda. It worked well, and has developed enormousely since May.  The two rose fees Romas Ceizaris and Eligijus Butkus, were brilliant
. Gerdas mother was Ilva Juodpusyte
. The old Gipsy Women who is lenting Gerda her reindeer was Jelena Lebedeva.

The beautiful fairytale has been a success for the company and for Michael Corder. The audience deeply feels the danish fairytale author  Hans Christian Andersens romantic and dramatic presence, and Michael Corder together with his great team, beautiful scenography and costumes by Mark Bailey, one of the really great designers in the world to day. Beautiful light by Paul Pyant and videos showing ice, snow, clouds, moon and the Snow Queen by Mantas Boiko.

The Michael Corder team has managed to make this magnific fairy tale come through in Vilnius, the capital of Lithuania. At its best, the music inspires Corder to some magisterial set pieces.

As the general manager Gintautas Kevisas mentioned in his speach at the premiere party in,May this year:  He feels that this will be a succes in  many ways, also commercially.  The audience loves it.

Corder has choosen music from the Sergei Prokofiev ballet score The Stone Flower, arranged by Julian Philips with a few additions from other works. Choosen a waltz from the opera War and Peace to create the the world of the Snow Queens aristocratic courtiers. Love music from Prokifievs opera Betrothal in a Monastery for Kay and Gerdas exquisite dream pas de deux, and the Scherzo from Symphony no 5 for the abduction of Kay, that closes Act 1. At its best, this has the pulse and orchestral drama of Prokofiev’s finest ballet music, – echoes resonate from both Romeo and Juliet and Cinderella, but still it is non of these two ballets it is The Snow Queen.

There is, unfortunately, no music to underline the history high light when Kay gets splinter of the glass in his eye. Furthermore the long second-act ball scene, which is greatly choreographed, and very well danced by the corps des ballet, is marking Kay’s arrival at the Queen’s court, comes with music that is just too worldly, too much fun. This is hardly a heartless frozen ­wilderness, it looks and sounds a whole lot more appealing, than the mortal world Kay has just left behind. 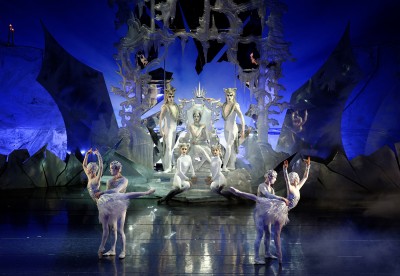 Mark Bailey’s good designs of scenography and costumes. The glamour of the Snow Queen’s palace is beautifully done, with crystal glitter, it looks like it is an ice throne for the queen, and an eerie white light. The costumes for the sprites, the  wolves and foxes are great, giving a good, charming atmosphaere, and the reindeer is brilliant. The sets and costumes for Kay and Gerda’s village are traditional, as in the fairytale, but it looks, unfortunately, as they’ve been taken from an old staging of Giselle.

The costumes are good, but since I have understood that we are supposed to be in Lapland, situated in the northern part of Russis, Finland, Sweden, Norway, i would have liked that the costumes could have had even a bit more Lapland style and atmosphaere, the forms are right, but they could have had even moreLapland details
. And since Kay and some of his friends in the first part are in Russian shirts, it becomes a bit strange. – However the total result is good. 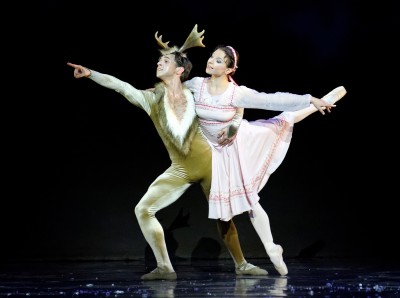 Unfortunately the Lithuanian National Opera Orchestra, conducted by Martynas Staskus who now have had 6 month since the premiere in May, still dont sound great
. Prokofievs music is demanding for the musicians, for the dancers and for the audience. In May it was growing and being better and better, but this time it sounds like they have had too little rehersals before the repremiere, and it is not yet at its very best.

– Furthermore not nearly as good as Pelené that they played at Saturday 26th for the Ciurlionis Cinderella performance, conducted by the inspired Alvydas Sulcys.

Michael Corder’s Snow Queen was ­premiered in London in 2007 but already it looks set to become an English National ­Ballet company staple. Rehersals for The Snow Queen starts at Wiener Staatsoper this autumn, and Praha shall also have The Snow Queen. Right now Michael Corder is choreographing and staging his popular Romeo and Juliet in Oslo, where it was premiered 22 years ago and still is a .

As an alternative to the ubiquitous Christmas Nutcracker, it’s obviously a big box office asset. As it will proably be here in Vilnius. Furthermore, unlike the Nutcracker, it has sufficient challenges to flatter most of its cast.

Please enjoy our applause video from Michael Corders success repremiere in Vilnius 22. and 23.10.2014.