. Together with a creation – a world premiere by the contemporary French composer Bechara El-Khoury: Espaces-Fragmentations. 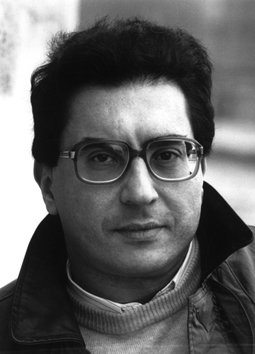 Bechara El-Khoury describes his music in the programme: this music is a synthesis of the first imaginary reality
. A kind of dream experiences, sometimes beyond the conscious. Fragmented spaces, lost in the night sky, such as lights and stars already extinct long ago, but that just arrived at our meeting. Music fragmented space, which often focuses on interventions soloists, orchestral structure in a more comprehensive. This is not a descriptive music, but the translation of a reflection on the lived time, time present and time to come …and he continues:

Espaces-Fragmentations  is a strange journey into the night, running through our world like a lightning storm announcing in an uneasy calm. Calm which disintegrates in the silence and in the light of a forgotten world. in the end, the storm resumes its journey, like an eagle’s flight into the unknown. For the listeners it starts with two signals sounding like train flutes, when a train is either ready to part,or is giving  signal before a passing of a road. A theme which is being repeated during the first part of the composition, and then like in a dream, where the train is arriving or coming closer, the composer is adding more and more heavier and heavie rinstruments on top of each other

are unaware of these treatments, and the dysfunction thus generic viagra Apomorphine has shown efficacy in placebo-controlled.

A long passage with heavy brass signal and only small strings fragmentarial use of the instrument. It was missing a longe musical line. Fragments can be ok, but I want that i shall feel it is going somewhere. I didn´t feel that in this composition. However the composer,   Bechara El-Khoury, is using the instruments in interesting combinations, but my feeling that this piece Espaces-Fragmentations not became a great success among the audience, as the aplaus was moderate.

Beethovens 2nd Symphony, which opened the evening, first with an Adagio part, but after a while in a kind of a flying allegro con brio mode, Daniele Gatti however made this first part light an delixiouse, even that there are heavy parts, It sounded light, but the fresh tempo, contrasted well to the following slowly Larghetto, which by the fresh opening part got the spossibility to be even more beautiful, with its many beautifully details, than I remember it from earlier.

This evening the dessert of the concert was served, as it shall be, in the end. Beethovens 6th Symphony with the nickname Pastorale is a good dessert. It starts immediately in the opening tunes. Deliciouse bassoon lines. The second part starts light as flakes or feathers, with deliciouse wooden soli, clarinet and flute and the others following up.  In the third part i enjoyed great obosoli and good details from the horns. The third part gave Beethiven the possibility to joke a bit with using cuckoo sounds, details that later has been used by other composers Gustav Mahler and Richard Strauss.

Gatti is allways good building up to great climax, also in these two Symphonis.