Zavaro and Beethoven i Paris

The Beethoven by Gatti sycle with Orchestre National de France, continues at Théâtre des Champs Élysées in Paris
. Monday 12th Symphonies no 8. and 3. Heroica were programmed together with La Bataille de San Romano, by Pascal Zavaro, which was this evenings world premiere. 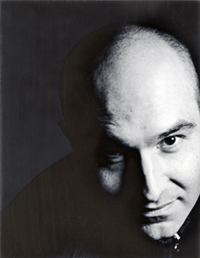 PARIS: Pascal Zavaro explains him self about his work: La Bataille de San Romano (the battle of San Remo): “The magnificent triptych of Paolo Uccello and warlike Trosieme of Beethoven, well separated from almost four centuries, were associated in my mind with the character common Fogue, fighting spirit, heroism, new vivid colors, rytmes Sequential, dynamism. My battle is in three movements chained (fast-slow-fast), which has the energy correspond deployed during the confrontation
. Beethoven and encourages by Ucello an openess of the line, I felt for the first time leads to us military cliches: timbales and Trompetes, cavalcades various descriptive assume their inevitable load”.

Furthermore  Zavaro refers to Edmond & Jules de Goncourt: “La Bataille de San Romano the shock of chivalry in the Middle Ages, this fight is a clash of a thousand duels simultaine al’arme white, this agglomeration furious armor, spears, helmets, or large red and black feathers swinging on this mysterious masked melee on the faces of men sails iron, and in the middle of desquel horses, a huge rump are Cabres, kicking the corpses, or losing foot in blood: a table that has the colorful movement of war body to body”.

What Zavaro describes here is the feeling we, the audience, was sitting with when we heard this master work for its first time. In advance I have noticed me the title La Bataille de San Romano, which has been giving me a signal in advance, and which of course helped to get the mind in the right direction, but in the work all the signals was clear, it was nearly like a film rolling inside my head, telling this history, as described above
. 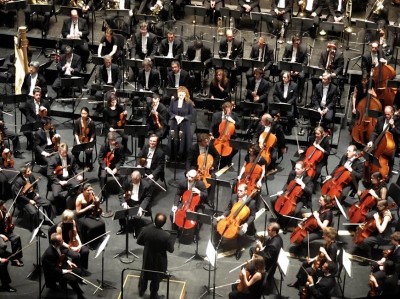 It starts, as early in the clear morning with a pianissimo pauke together with one tune from the first Bratch, which flutes, (as birds in the early dawn), takes up, all in pianissimo, this is followe by more small strings, flutes, wood, trumpet fanfare – like a Reveille, as waking up every body to be ready for the battle. – Then some action comes flying around an/ and between the different groups of musical instruments building up to something, that we dont know what is going to happen.

Then a sordined trumpe is presentng a long theme, which is followed up in the clarinets. Action comes starting in the strings. Rhytmically figures gives some exitement to the atmosphaere and a new melodic tune tells us a kind of a history.

It all calmes down and we are getting trumpet signals from far away (outside the stage), , is the battle over?, we have the feeling tht we can see the smoke hanging over the battlefield, it all ends with sordined strings

Before the Zavaro composition we enjoyed

Symphony No. 8 in F-Major op. 93 in four movements composed by Ludwig van Beethoven in 1812. Beethoven fondly referred to it as “my little Symphony in F,” distinguishing it from his Sixth Symphony, a longer work also in F.

The Eighth Symphony is generally light-hearted, though not lightweight, and in many places cheerfully loud, with many accented notes. Various passages in the symphony are heard by some listeners to be musical jokes. As with various other Beethoven works such as the Opus 27 piano sonatas, the symphony deviates from Classical tradition in making the last movement the weightiest of the four.

We noticed with pleasure an interesting part in the 3 movement with relations to the wooden blowers and a beautiful leading melody in the bassoon, deliciously played
.

Finally, Beethoven´s Symphony No. 3 in E flat major (Opus. 55), also known as the Eroica (Italian for “heroic”), The Third was begun immediately after the Second, completed in August 1804, and first performed 7 April 1805. It is a musical work marking the full arrival of the composer’s “middle-period,” a series of unprecedented large scale works of emotional depth and structural rigor.

The symphony is widely regarded as a mature expression of the classical style of the late eighteenth century that also exhibits defining features of the romantic style that would hold sway in the nineteenth century. The Funeral March (second movement) was extraordinary wellformed, and it was a pleasur eto follow how well the conductor Daniele Gatti and his musicians in Orchestre National de France are communicating. Luc Héry was this evenings concertmaster.

Historically: The Battle of San Romano 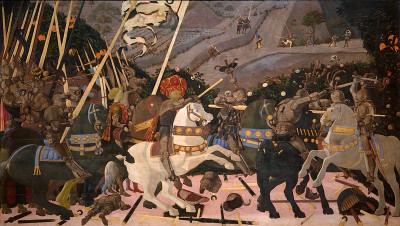 They are significant as revealing the development of linear perspective in early Italian Renaissance painting, and are unusual as a major secular commission.

Unfortunately the three paintings has been splitted up, one is at the National Gallery in London, the middle one at Louvre and the third one in Ufficio. 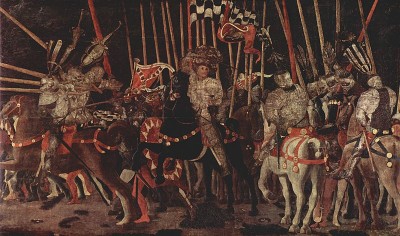 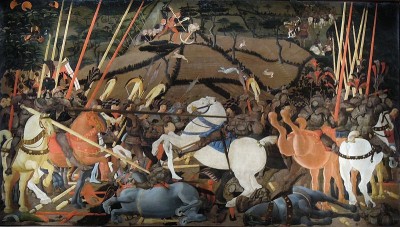 The paintings are in egg tempera on wooden panels, each over 3 metres long. According to the National Gallery, the panels were commissioned by a member of the Bartolini Salimbeni family in Florence sometime between 1435 and 1460.