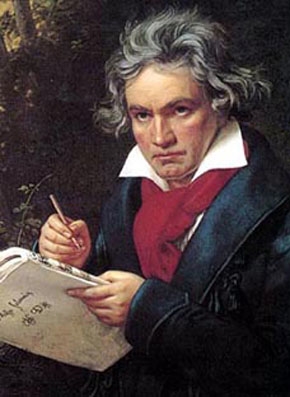 The Finnish Radio Symphony Orchestra conducted by Sakari Oramo with the baritone Christian Gerhaher and mezzosoprano Lilli Paasikivi are closing the Beethovenfest Bonn 2011 on 9 October with works by Beethoven, Liszt and Mahler. The closing concert thus also programmatically brings our festival this year full circle. The Beethovenfest Bonn 2011 from 9 September to 9 October was held under the motto ‘Music of the Future. Beethoven, Liszt and Innovation in Music’.

Franz Liszt was born on 22 October 1811. To mark the bicentenary of his birth, the Beethovenfest Bonn has over the past four weeks looked back on a long festival tradition, for in 1845 Franz Liszt organized a three-day music festival to mark the unveiling of the Beethoven Memorial on the Münsterplatz, an event that coincided with the 75th anniversary of the Beethoven’s birth. This year, Franz Liszt has been at the focus of the 64 concerts in the main programme and many of the 100 events in the accompanying programme – as a personality, visionary, patron, virtuoso and composer. His relationship with Ludwig van Beethoven was also the subject of attention; Liszt revered Beethoven, and developed his own ‘music of the future’ from his œuvre, music whose influence was felt well into the 20th century. The Beethovenfest Bonn made the centenary of Gustav Mahler’s death on 18 May the occasion for a special concert, and also for the performance of many of his compositions during the festival itself.

After four and a half weeks, the Beethovenfest Bonn 2011 can draw up an extremely positive balance-sheet: 88% of seats were sold, and 41 concerts in the main programme were sold out. Altogether, some 70,000 visitors attended the 164 events in the main and accompanying programmes. The four concerts in the Beethovenhalle and the Aula of the university, with which the Beethovenfest made its own contribution to the ‘Deutschlandfest’ from 1 to 3 October in Bonn, as well as the open-air festival ‘Clear the stage for Beethoven’ on 1 October with eight stages in Bonn’s city centre, attracted a further 20,000 or so visitors. 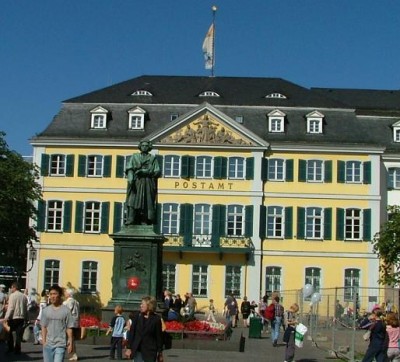 “Many of the musicians have shown us that music of the future is not some mind game, but something that becomes reality at the Beethovenfest. Particularly impressive was the first foreign concert to be given by the National Youth Orchestra of Iraq in the presence of the German president Christian Wulff and his wife Bettina. What these 43 young musicians have achieved in the most difficult and hostile conditions, with no continuity of instruction and with only one rehearsal phase per year, is amazing! That is music of the future made sound,” was how Ilona Schmiel, the general manager of the Beethovenfest Bonn, summed it up. At the Orchestra Campus staged by Deutsche Welle and the Beethovenfest Bonn under the patronage of the German president, the National Youth Orchestra of Iraq gave a concert in the Beethovenhalle on 1 October, conducted by Paul MacAlindin. Arabella Steinbacher made her Beethovenfest debut with Beethoven’s Violin Concerto. The concert was preceded by a two-week rehearsal phase in Bonn, and before that, a fortnight of intensive preparation in Erbil in northern Iraq. The orchestra, founded in 2008 by the now 21-year-old Iraqi pianist Zuhal Sultan, meets just once a year; the members come from all parts of Iraq to a two-week summer campus in the Kurdish part of the country. For the rest of the year, the musicians are largely left to their own devices, getting instruction from foreign tutors via Skype and Youtube.

Until the day of its first performance, the new work by Rebecca Saunders for violin and orchestra, commissioned by the Beethovenfest Bonn and BBC Radio 3, was also ‘music of the future’. Carolin Widmann and the BBC Symphony Orchestra conducted by Sylvain Cambreling gave the composition ‘still’ its baptism at the Beethovenfest on 29 September. “It is a very expressive work, and it is conspicuous, in the most positive sense, that Rebecca Saunders composed it for Carolin Widmann. I am certain that this work will find a place in the canon of 21st-century music, and be performed many more times,” said Ilona Schmiel, expressing her hope in the sustainability of a contemporary concert repertoire.

The future of classical music will quite certainly be shaped in part by some of the student managers of the Young Beethovenfest. Starting in February, ten students in years 10 to 12 from seven high schools in Bonn and the surroundings worked on the concert, which they organized, by Goran Bregović and his Wedding and Funeral Orchestra in the Telekom Forum on 17 September. On the evening of the concert they and the first two student-manager generations were the recipients of an award as one of the ‘365 Places in the Land of Ideas’. Altogether the varied programme of the Young Beethovenfest reached 3,750 children and young people, 1,875 of whom were active participants, and the rest involved in specially designed activities.

Goran Bregović was making his first appearance at the Beethovenfest Bonn, as were Steve Reich (on the occasion of his 75th birthday), Julian Rachlin, Sayaka Shoji, Martin Stadtfeld, Linus Roth, Eugene Ugorski, Dejan Lazić, Iveta Apkalna, Mihaela Ursuleasa and Nikolai Tokarev. The three last-named made their debut in the context of the Liszt Night, in which the focus was on Liszt and his place in the history of music. On 24 September, in ten concerts at five different venues, the Beethovenfest Bonn showed Franz Liszt in many facets: as a symphonic composer, as a member of the avant-garde, as a composer of religious and folk-inspired music, as a composer of lieder, and as a chamber musician.

The Beethovenfest Bonn commemorated the first Beethoven Festival in 1845, which Liszt organized in Beethoven’s honour, by staging a faithful reconstruction of the concert performed on the second day of the 1845 event: on 7 October, Concerto Köln under Ivor Bolton, with soprano Chen Reiss and pianist Alexander Melnikov, gave us a programme consisting entirely of works by the festival’s eponym.

Further outstanding pianists played in Bonn during the final week of the festival: on 6 October, Murray Perahia gave the concert he was forced to cancel in 2004, and two days later Arcadi Volodos impressed the audience with, in particular, his virtuoso performance of Liszt.

Three ‘orchestras in residence’ were warmly received at the Beethovenfest Bonn 2011. With two concerts on 9 and 10 September, thePittsburgh Symphony Orchestra under Manfred Honeck opened this year’s festival with soloists Anne-Sophie Mutter and Hélène Grimaud respectively. The concert with the latter was transmitted live from the Beethovenhalle to a big screen on Münsterplatz, enabling an audience of 4,500 to watch and listen to the performance, spellbound.

Beethoven i 2004, sculpture in front of Beethovenhalle.

The second ‘orchestra in residence’, the London Symphony Orchestra, enthused the audience on three evenings in a sold-out Beethovenhalle with its performances of works by the great man. First, Sir John Eliot Gardiner conducted Beethoven’s Symphonies nos. 4 and 5 and nos. 1 and 9 on two successive evening, while on the third evening Sir Colin Davis was on the rostrum for the ‘Missa solemnis’.The third ‘orchestra in residence’, the Deutsche Kammerphilharmonie Bremen, has held this position for many years. Under Paavo Järvi, they continued their Schumann symphony cycle which they had begun at the Beethovenfest Bonn 2010. At her Beethovenfest debut,Sayaka Shoji gave us a fiery Brahms Violin Concerto.

Another newcomer to the Beethovenfest Bonn, the Croatian pianist Dejan Lazić, performed Liszt’s ‘Totentanz’ together with the Budapest Festival Orchestra under Iván Fischer. Like the interpretation of Mahler’s Symphony no. 1 by the same performers, it was given a standing ovation.

There were standing ovations in a packed Beethovenhalle too for Zubin Mehta, who, in the course of a concert with the Israel Philharmonic Orchestra, was awarded the Wilhelm Furtwängler Prize for his musical achievements and his social commitment
. The very personal eulogy was delivered by his comrade-in-arms of many years at the Bavarian State Opera, Sir Peter Jonas.

Quieter but nonetheless resounding echoes were left too by the chamber music performances in the smaller of the 25 venues of the Beethovenfest Bonn, all of which were sold out. These included the concerts given by Steven Isserlis and Dénes Várjon, Julian Rachlin and Itamar Golan, Eugene Ugorski and Linus Roth along with the lieder recitals with Julia Koch, Andreas Burkhard, Matthias Goerne and Claudia Barainsky, together with the pianist Eric Schneider, who had compiled the three evenings of lieder by Liszt. Elena Bashkirova and her Jerusalem Chamber Music Festival Ensemble returned once again to the Beethovenfest Bonn with two cleverly compiled chamber music evenings, as did the Hagen Quartett, which celebrates its 30th anniversary this year. Barbara Auer, Corinna Harfouch and Ulrich Noethen gave magnificent readings in the context of the musico-literary programme of the Beethovenfest, which was devoted in particular to Franz Liszt and his relationships with women.Liszt’s relationship with his Hungarian homeland was the subject of another focus of the Beethovenfest Bonn. On the one hand we heard works in which Liszt used influences from Hungarian folk music, on the other we heard musicians and ensembles who foster the musical heritage of eastern Europe and the Balkans: the Fanfare Ciocãrlia, the Gypsy Devils with Paul Gulda, Ivo Papasov & Band, andFerenc Snétberger with Tony Lakatos. At the Beethovenfest Bonn 2011 under the patronage of the state premier of North Rhine Westphalia Hannelore Kraft, 46,000 tickets for 64 main-programme concerts at 25 venues in Bonn and the surroundings between 9 September and 9 October were on offer. The annual Beethovenfest is made possible by grants from the city of Bonn and the surrounding district, the Rhein-Sieg Kreis, as well as by project-related grants from the state of North Rhine Westphalia and the German Foreign Ministry. The main sponsors Deutsche Post DHL, Sparkasse KölnBonn and Deutsche Welle have been supporting the Beethovenfest for many years, along with a large number of smaller sponsors and foundations. In addition, the Beethovenfest Bonn has media partnerships with the local newspaper, the Bonner General-Anzeiger, with the regional broadcaster Westdeutscher Rundfunk, with the national broadcaster Deutschlandfunk / Deutschlandradio Kultur, and with the international broadcaster Deutsche Welle. The last-named broadcasts many of the concerts worldwide, and makes these and others available as podcasts. The Beethovenfest Bonn is represented in the Social Web on Facebook, Twitter, Vimeo, YouTube and Flickr

a minimum duration of three months is generally accepted11Impact of Erectile Dysfunction (ED) How does cialis work?.

. In addition, this year’s festival enjoyed much media interest from home and abroad; the young musicians of the National Youth Orchestra of Iraq were a particular focus of attention.

Next year’s Beethovenfest Bonn will take place from 7 September to 7 October 2012. The first concert highlights and the special concerts in the spring will be announced in November this year, while the complete programme will be presented in March 2012.