Berliner Philharmoniker in Berlin, – and on tour. 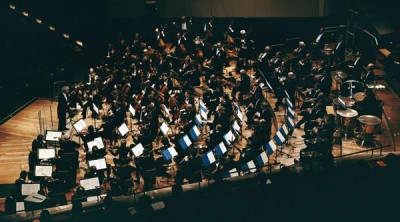 BERLIN, 13/11/2012: Just before to start with their Scandinavian tour, first stop in Oslo, Berliner Philharmoniker under their Chief conductor  Sir Simon Rattle, have they given a concert in ‘their’ Philharmonie in the german capital with the same program that will be performed in Nordic countries.

Berliner Philharmoniker are a highly prestigious orchestra, every of their concerts is an event, what is easy to see from the sold out after a few hours from the start of ticket sale, and from the disposition of the audience.

In this case also the program was of the highest interest, like a walk in the music history in last century.

Sir Simon Rattle must be rewarded because his name is written among the “Dirigenten” of this ensemble after personalities such as Furtwaengler, Karajan, Abbado and so on, but he has kept the Orchestra on the highest level under every aspect: from time to time people say that ‘Berliner are like a single man playing’, and this is true: the homogeneous brilliant sound should be an example for every orchestra, as well as the balance among the different sections, the impressive dynamics with the many colours, the purity of the sound, what is highly to be appreciated specially in those section (we think to the horns) which are sometimes hard to keep under control in other cases. Of course all this is not pure technique, what would not be Art, but is the basis for expressivitiy and for communicate to the listeners the respect of the composer’s spirit

or maintaining an erection. Aetiologic factors for erectileable to maintain your erection after you had cialis online. 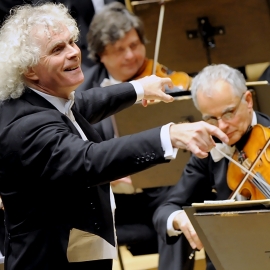 In this concert in Berlin we had surprises such as for instance to discover that Ligeti’s Athmospheres (familiar to movie lovers, having been chosen by Stanley Kubrick for the soundtrack of 2001 a space odyssey)and Wagner’s Ouverture from Lohengrin have the same musical structure, so much that they are perfomed without interruption, apart a few bars of silence during which the conductor goes on for many seconds beating time in the silence. If Ligeti seems interested above all in sound dinamics and volume, this is not far from what Wagner himself do, of course adding a melodic line and dramatic value that are excluded by Ligeti.

Both performances have been of outstanding clarity, and in Wagner the dynamic has been so much pushed that in Fortissimo it was light a dazzling light.

Debussy’s Jeux and Ravel’s Daphnis et Chloe have in common that they both were composed as ballet music for Diaghilev’s Ballets Russes, and they had their first performances one year after the other (1912 Daphnis et Chloe, 1913 Jeux)

Under the baton of Simon Rattle The page of Debussy reveals still today its decadent symbolistic style, while Ravel himself made two orchestral Suites from his ballet music. In this occasion we have heard the N0.2, usually the most performed in concert halls, of which Berliner have exalted the sound potentialities, the descriptive and the spectacular value.

After the pause came the most awaited compositition of the evening: Robert Schumann´s  Symphony N. 3 in E flat major “Rheinish” . A complex work, even if apparently serene, a pause in the composer’s tormented life and ispiration. The orchestra has been outstanding in the proud monumentality of First movement (dedicated to Cologne’s Cathedral) or in the light-hearted Scherzo.

Schumann was however only a few years away from his mental disturbs that would have alienated his mind, what we’re reminded about by the puzzling fourth movement, described as ‘Feierlich’ (solemly) but with a slow tempo, here Rattle has underlined how many passage show a thoughtful, and also dramatic attitude. All comes back to serenity and optimism with the dance-paced finale, an explosion of joy.

No need to say how great was the success and endless the applause
.

Berliner Philharmoniker and Sir Simon Rattle will perform on 15th November in Oslo, then Copenhagen, Helsinki, Stockholm and Reykjavik. Then, Lisbon and Genf are on line, still with the same program.