By Henning Høholt on 6/13/16 • Categorized as Classical music 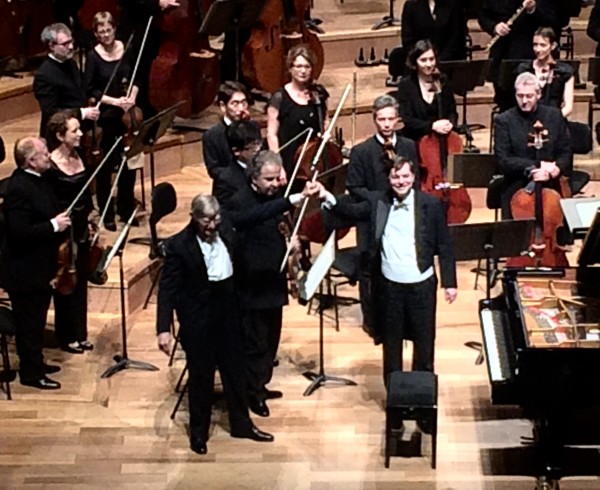 Grand success for Till Fellner (right) and Herbert Blomstedt in their brilliant Pianoconcerto no 5 – Emperor – by Ludwig van Beethoven with Orchestra de Paris at Philharmonie de Paris 8. and 9th. June 2016. Foto Tomas Bagackas.

PARIS/FRANCE: Last night we rejoiced over experiencing one of the  great conductors in the world in Paris, Herbert Blomstedt, who with Orchestre de Paris outstanding conducted Beethoven’s 5th Piano Concerto with TILL FELNER as soloist, and Mahler’s 1st Symphony in the new great Philharmonie de Paris. (But sadly is situated too far away, – even for us, who live central in the city of Paris).

Distinct, elegant piano soloist, soft pianissimo, brilliant fortissimo, musicality, bravo. Till Fellners presentation and interpretation of Beethoven Emperor Concerto, dedicated to the arch duke Rodolphe of Austria, and premiered i 1811 in Dresden, was performed with great virtuocity and elegance, that seemed to work well with the conductor Herbert Blonstedts ideas about what he wanted from the Emperor concerto, first class.

Interpretation: It was beautiful how the piano soloist kept the last accord of first part, until it has end in the great acoustic, and in the second that it had ended Blomstedt started the second part – the Adagio, – and formed it in a beautiful relaxed tempo, that gave a beautiful contrast to the first part, and that also gave the orchestras outstanding soloists in all the sections the possibility to form their many different solo parts excellently. – The same keeping the tune in the end, happened between the 2. and 3. part, and was taken well care of by the pianist to build up the opening of the 3rd part to the dramatic opening session.

Since returning to the Orchestre de Paris in 2010, Herbert Blomstedt led to memorable concerts dedicated to Bruckner, Beethoven and Brahms. He will find the Austrian pianist Till Fellner he led in 2014 in the Beethoven Fourth Concerto.

. Symphony so well. It sounded like it came from his heart. Again, due to his wide knowledge of the piece, and also because of the great acoustic in the hall, he gave the orchestra and specially the 7 french horns all the possibility to show them self from the very best sides, so even the single, but important tunes from the harp was clear, we felt the atmosphere from the countryside inspirations, and enjoyed the large trumpet fanfares. Not to forget the very musically work from the 1st. Timpani, who in the end were doubled by the 2nd. Timpani. The opening of the 2nd part, March, where the brilliant solo contrabass, followed by the bassoon, and obo, in the tempo of the timpani was extraordinary beautiful.

A big evening, the applause didn´t want to stop, nor after the Beethoven piano concerto, nor after Mahlers 1st Sympnhony.

Paavo Järvi, The last night for him as music chief with Orchestra de Paris, Archive photo from Unesco Festival in Bucharest 2013, by Henning Høholt

18th June: Mahlers 1st Symphony will be followed by two more Mahler symphonies during the coming few days. Saturday 18th It is the evening for the grand final evening with Paavo Järvi after his long periode as musichief and chief conductor of Orchestra de Paris it will be celebrated with Mahlers 3rd Symphony, with Michelle DeYong, alt, and the Choire and children Choire of Orchestra de Paris.