By Henning Høholt, text and  some photos

BIARRITZ/FRANCE: 6 years with Bournonville in Biarritz has soon been gone. The last day this summer is 2nd. August, in the beautiful situated city at the French south-west cost, admired by visitors, who are wanting to return to the city for summer holidays and enjoying the great beaches, deliciouse cafes and restaurants and the international atmosphaere. It starts 28th. July.

. 2014, Foto Henning Høholt ” src=”http://kulturkompasset.com/wp-content/uploads/2014/07/Dinna-Bjørn-Alice-Catonnet-Antoine-Kirscher-Eric-Viudes-2014-Foto-Henning-Høholt-Kopi-400×194.jpg” alt=”” width=”400″ height=”194″ /> After the last rehersal at The Opera de Paris, Palais Garnier, Dinna Bjørn and Eric Viudes presents the two young dancers: Alice Catonnet, Antoine Kirscher who shall dance August Bournonvilles Pas de la Vestale at the Bournonville Galla in Biarritz 1. august 2014. Music by Spontini. To the right Eric Viudes, who was taking the initiative to Bournonville in Biarritz 6 years ago. Gilbert Mayer has been balletmaster during the production at Palais Garnier. 2014, Foto Henning Høholt 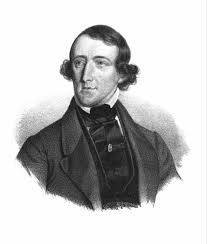 tion when they are indicated, you can amoxil demonstrate how the components removed from the process side of wheat piÃ1 soft compared to the traditional one..

Through 6 years The Bournonville Academy from Copenhagen has been teaching the 6 August Bournonville classes to guesting ballet dancers, ballet students, ballet pedagogues and ballet critics from all over the world, and in this way, for the first time in the world, has managed to present Bournonvilles ballets in such a wide way to interested ballet people.  Why 6 years?That is because Bournonville created 6 different ballet classes, one for every day in the week, Monday, Tuesday, Wednesday, Thursday, Friday and Saturday. – Sunday is the day of. These classes has then, in these courses, being presented in connection to performances, where some of the steps and variations from the classes are being classes. And in that way are being made alive for the participants. 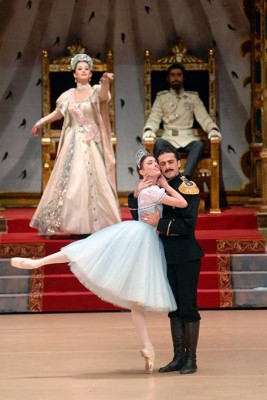 Nino Gogua and Vasil Akhmeteli with Grand Duchess Maria in From Siberia to Moscow. Photo by State Ballet of Georghia.

This, the last year it is the famouse Napoli, which is known as the visiting card of The Royal Danish Ballet, and in addition Auguts Bournonvilles last ballet from Siberia to Moscow, which lately was being recreated for the Tbilisi Ballet, Georgia by Frank Andersen and Dinna Bjørn.

From Siberia to Moscow, was the last ballet created by August Bournonville and had premiered on November 29th 1876 at the Royal Danish Theatre in Copenhagen and was last performed there in 1905. 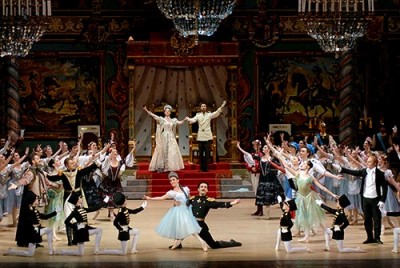 Unfortunately, I have not seen From Siberia to Moscow, but to help the readers here at Kulturkompasset, we have found some pictures from the Tbilisi Ballets premiere of the ballet, which hopefully will help giving our readers a feeling of the ballet.

The Tbilisi ballet is having the former world famouse Ballerina Nina Ananiasvilli as their ballet chief, and she has been working for many years together with both Frank Andersen, who is well known for his periodes as ballet chief for The Royal Danish Ballet, Copenhagen, and The Royal Swedish Ballet, Stockholm, And with Dinna Bjørn, who is well known for her periodes, 12 years as ballet chief of  The Norwegian National Ballet, Oslo, and later the Finish National Ballet, Helsinki. 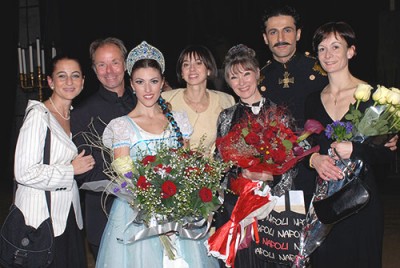 Ms. Bjørn has furthermore an additional deep connection to Bournonville and the Royal Danish Ballet, as her father Niels Bjørn Larsen was ballet chief there, and beside that also for a periode he was ballet chief at Pantomime Theatre in Tivoli, where now Peter Bo Bendixen is ballet chief, and where Dinna Bjørn are guesting as choreographer, this year with a reproduction from 2013 of The Steadfast Tinsoldier, build on H.C.Andersens fairytale, also in this production with chenography and costumes by her Royal Majesty Queen Margrethe II of Denmark.

This is their 4th production of a fairytale ballet together for the Pantomime Theatre. James Price has composed the music. For The Pantomime Theatre in Tivoli, Copenhagen she has created four Hans Christian Andersen ballets, with her Majesty Queen Margrethe the 2nd of Denmark as designer of the décor and costumes:

– Hopefully this inspiring cooperation will continue, and the audience will hopefully get even one more  fairytale ballet, by this outstanding team. But that is another thing. Only by the fantasy and the knowledge of the many H.C.Andersen fairytales the audience can start guessing and hoping that the team which of the tales will  choosed for an eventually following up at The Pantomime Theatre at Tivoli in Copenhagen

Back to Biarritz: This special connection with Biarritz came through the former brilliant balletsoloist at the Norwegian National Ballet, Eric Viudes,  who is from Biarritz, through his connection with Oslo and Dinna Bjørn. After his own carriere as ballet soloist he is now a well renommated pedagogue, and teaching all over the world.

In addition to the Summer seminar in Biarritz this year will be shown a special ballet galla august 1st, in the house of and in cooperation with The Malandin Ballet. To this special occassion leading star from international ballet companies are invited, as for exampel Eugenie Skilnand and Philip Currel from The Norwegian National Ballet who shall dance from Bournonvilles La Sylphide.

This Video: From 1967 with Flemming Flindt and Toni Lander from Bournonville’s Saturday School. This is the incredibly difficult “Pas de Vestale”, created by August Bournonville for himself and Lucile Grahn in 1834. Miss Grahn was only 14 at the time! and which we are happy still exist on Youtube: https://www.youtube.com/watch?v=S_mEJpMP5Js

Bournonville created this after he has been away to Paris from Copenhagen, and it is supposed, that he, like every one else has been inspired of what he has been seing in the ballet world in Paris. 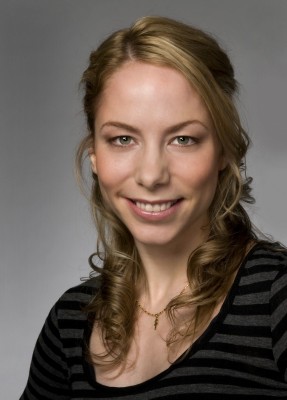 Eugenie Skilnand shall dance from La Sylphide together with Philip Currell as James at the Bournonville Galla in Biarritz 1. August. Foto: Erik Berg

In addition to the Summer seminar in Biarritz this year will be shown a special ballet galla august 1st, in the house of and in cooperation with The Malandin Ballet

. To this special occassion leading star from international ballet companies are invited, as for exampel Eugenie Skilnand and Philip Currell from The Norwegian National Ballet who shall dance from Bournonvilles La Sylphide.

The very special event is that in a positive cooperation with The Paris Opera Ballet and its chief Brigitte Lefevre, Dinna Bjørn and Eric Viudes has instructed two young very talented dancers, Alice Catonnet and Antoine Kirscher, from this company in August Bournonvilles Pas de la Vestales, music by Sponitini. A very demanding pas de deux, which last time were danced by Toni Lander and Flemming Flindt, some 40 years ago,  This Video: From 1967 with Flemming Flindt and Toni Lander from Bournonville’s Saturday School. This is the incredibly difficult “Pas de Vestale”, created by August Bournonville for himself and Lucile Grahn in 1834. Miss Grahn was only 14 at the time! and which we are happy still exist on Youtube: https://www.youtube.com/watch?v=S_mEJpMP5Js

Bournonville created this after he has been away to Paris from Copenhagen, and it is supposed, that he, like every one else has been inspired of what he has been seing in the ballet world in Paris.

At the Bournonville Galla in Biarritz Pas de la Vestale will be performed by Alice Catonnet and Antoine Kirscher from The Paris Opera Ballet.

Historically, to keep a great ballet style tradition alive it is therefore of the greatest importance the initiative by Eric Viudes towards his home city Biarritz, that Bournonville is not only being teached in Copenhagen, but around in the world. It is specially positive that one of the worlds greatest companies, during the times of history, The Paris Opera Balletis letting two of their dancers learn this brilliant pas de deux, that, seen from my point oif wiev, for sure will be a demanding request for for international gallas during the coming many years.

Specially when it is danced by two so good dancers. Hopefully it will also again open the world for Bournonvilles ballets. We do know that the Paris Opera Ballet will make a new production of Etudes, by Harald Lander, premiere 20th September, which transposes a dance class to the stage. Conceived by Harald Lander who was a choreographer, ballet master and director of the Opera’s Ballet School, this ballet can be seen as a manifesto of classical technique, of its purity, rigour and exactingness, In Paris staged by Thomas Lund, who after a brilliant carriere as the leading male star soloist by The Royal Danish Ballet, he has now taken over as Head of  The Royal Danish Ballet School. This interest for Danish ballets, we do hope will continue in a constructive during the periode of the new Paris ballet chief Benjamin Millepied.

The City of Biarritz and the region shall be greatfull that they do have such a capacity as Eric Viudes in their center, who is spending so much of his energy, knowledge and contacts, to bring Bournonville to Biarritz,  as, I am sure, that it is not to be rich of, but hopefully the city understands what it is bringing to the people living there and to the international atmosphaere of Biarritz.