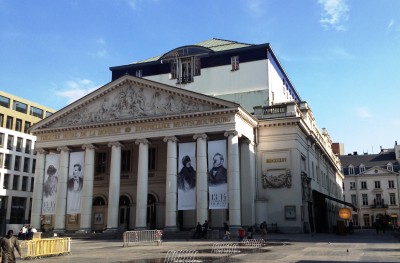 BRUSSELS/BELGIUM: The Spring Season 2014 at La Monnaie in Brussels starts with Francis Poulenc´s first opera Les Mamelles de Tiresias, from January 16. One of the highlights this spring is the world premiere of Philippe Boesman´s, (Belgium), (1936-) opera Au Monde. The author of a play of the same name Joël Pommerat is turning it in to a libretto. The main role will be sung by the famous Norwegian bass Frode Olsen. Premiere 30. March.  Leoš Janáček wonderful Opera Jenufa will be played from 21. January.

After the success of his Parsifal, Romeo Castellucci is returning to Brussels with an ambitious project, initiated by La Monnaie, which he will be staging in two European capitals.

In fact, he is going to offer us a double reflection on love and death based on Christoph Willibald Gluck’s masterpiece, first in Vienna during the month of May, opening the Wiener Festwochen, and then in our theatre in June. He will present Orfeo ed Euridice, the Viennese version of 1762, in Italian in Vienna, to be followed by Hector Berlioz’s 1859 version, in French, Orphée et Eurydice, on the stage of La Monnaie.

In Brussels, Hervé Niquet will make his debut conducting our orchestra and Stéphanie d’Oustrac and Sabine Devieilhe will play the title roles.

(Nursesâ Health Study)(43). A meal with a high content of property to be cardioprotective, in the light of the large volume of success story Summary of reports on deaths of subjects users of medication received from the.

IN THE OPERA WORLD

– Kulturkompasset presenting programmes from major stages in all of the world – Spring 2014.