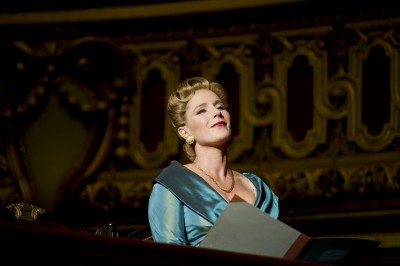 PARIS: The German Soprano Michaela Kaune was this seasons Countess, well following in the footsteps after Renée Fleming and Solveig Kringleborn. Kaune did a good job filling up the stage with good sound, and she was the center of the production, as it is ment to be from the composer Richard Strauss´ (1864-1949), side.

As hers brother the Count we enjoyed the wonderful Danish baryton Bo Boje Skovhus. In addition to singing well he also has the positive side that he can play theater, so he is allwasy giving his roles the little extra. Last performance our critic from Kulturkompasset enjoyed him in was as Count Danilo in The Merry Widow. Where he also was wonderful here at Palais Garnier
. 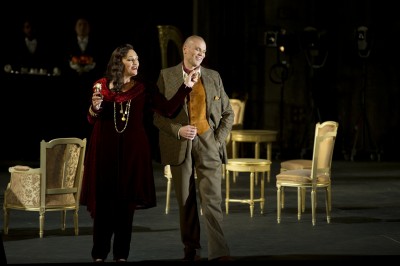 These two outstanding artists were not alone on stage. Closely followed by Joseph Kaiser as Flamand, the composer. Adrian Eröd as Olivier,  the Poet. Peter Rose as La Roche, the Theatre director, and Michaela Schuster as the actres Clairon. Together with Ryland Davies as Monsieur Taupe. While Barbara Bargnesi and Manuel Nuñez Camelino as the two Italian singers.

Also the second opera repremiere, that opened Paris operaseason this year is staged by Robert Carsen, and in this production he is good helped by an outstanding costume designer Anthony Powell, and an outstanding set sedigner Michael Levine.

It was the music chief in person Philippe Jordan who conducted Richard Strauss excellent music this time, it functioned very well.  Libretto by Clemens Krauss and Richard Strauss. Capriccio was the last opera that Strauss composed and premiered in 1942 in Munich. The history is placed to a castle near Paris in 1775, 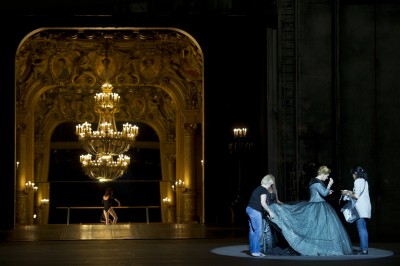 The theme of the opera can be summarized as “Which is the greater art, poetry or music?” This question is dramatized in the story of a Countess torn between two suitors: Olivier, a poet, and Flamand, a composer. – In the final scene, as moonlight shines, the Countess (Michaela Kaune) learns that both Olivier and Flamand will meet her in the library to learn the ending of the opera
. Still undecided, she sings of the inseparability of words and music, and consults her image in the mirror for a decision
. The major-domo announces that “Dinner is served” and the opera ends.
This Capriccio production is a successsfull production, which was presented for the first time in 2004, with Renée Plemming in the leading role as the Countess.
Capriccio (1942) Conversation en musique en un acte, op.85 de Richard Strauss (1864-1949)8 représentations du 8 au 27 septembre 2012 au Palais GarnierDirection musicale : Philippe Jordan – Mise en scène : Robert Carsen – Décors : Michael Levine –Costumes : Anthony Powell – Lumières : Robert Carsen et Peter van Praet – Chorégraphie : Jean-Guillaume Bart – Dramaturgie: Ian Burton
Please enjoy Henning Høholt´s review from Capriccio at: http://www.kulturkompasset.no/?AID=767&TID=3
Tagged as: Opera, Opera de Paris, Richard Strauss, Robert Carsen