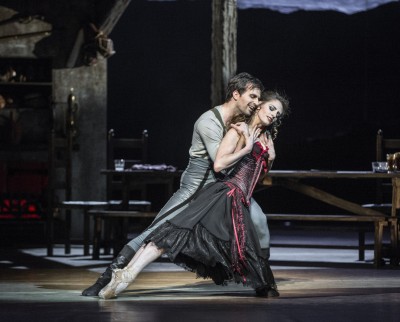 Melissa Hough and Kaloyan Boyadjiev in the beautiful love pas de deux in the second act, after he has finished his month in the prison for letting Carmen run away, when she was areste din the first act. Beautifl
. Foto Erik Berg.

Carmen is the first whole evening ballet by Liam Scarlett, but for the National Ballet in Oslo he has earlier choreographed the Firebird to a program In Fokine´s world and Vespertine to Barokk Master evening both in 2013.

As usual in Oslo there are several casts, three in the leading roles, wher many of the comanys excellent star are getting major challenges.

In the world premiere cast we enjoyed Melissa Hough as an exotic Carmen, unfortunately, for me too little latin, more anglosax. Together with the wonderful strong and handsome Kaloyan Boyadjiev as Don José, with latin feelings in his performance of the demanding theatrical choreography. Eugenie Skilnand was beautiful as the innocent Micaëla, with beautiful details, and Aarne Kristian Ruutu the temperament full Escamillo, the Toreador. 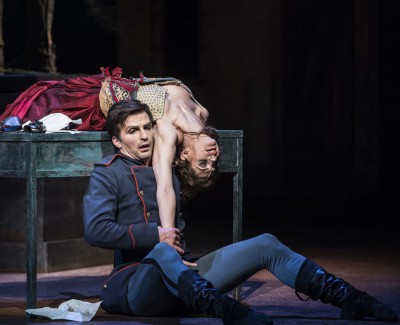 With a representative group of international ballet critics present, the National Ballet and its chief Ingrid Lorentzen can notice more and more international interest for the company, something that the company and its brilliant qualityes deserve, and whic is also clear after the guestings abroad lately. Furthermore the invitations from abroad, as for exemple the invitation for 2016 to visit Deutsche Staats Ballet, Berlin with Ghosts.’ 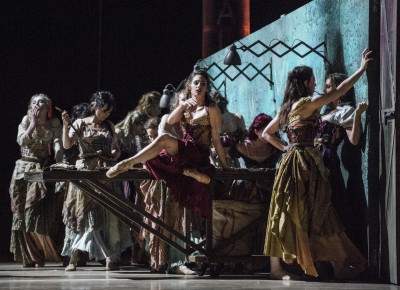 CARMEN-Melissa-Hough;
surrounded by female members of the Natinalballett in the cigar factory. Foto Erik Berg

This Carmen world premiere´ succes is first and foremost based on choreographer Liam Scarlett incredible ability to provide a forward driving flow in the work, his idea wealth in movement language step combinations, his brilliant musicality, where there constantly are surprising use of rhythmic movement details that correspond 100% with the music, for example in the tobacco girls cigar production.

Furthermore Scarlett´s ability to build up a dramatic action, taken good care of by the National Ballet great dancers, – the stars in the four leading roles, Carmen, Don José, Micaëla and Escamilio.

The soloists in the many well-possessed minor roles and corps des ballet slides together a story that we all know more or less well, and adapted to an action where Scarlett manage to get it together well in his synopsis. In his close cooperation with the responsable for the musical arrangemen Martin Yates, who also conducts this new production, in addition to the wealth of wellknown Carmen music, and in addition added a number of other Georges Bizet compositions, which fits well in to the Spanish atmosphaere. 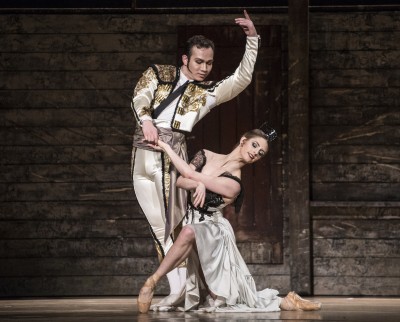 However Scarlett is loyal to a broad range of the well known familiar themes, fate motif as we enjoy early in the ballet, and who is in the final sequence when Don Jose kills Carmen with a knife. And not to forget the Habanera, Sequedilla, the duet between Michaela and Don José “Parlez moi de ma mère “, and so on. as the musical framework for the many solos and pas de deux, one after the other.

In a visual very well functioning scenography and good costumes by Jon Bausor, where I specially liked the soldier uniforms, and in the great light design by James Farncombe.

The orchestra plays very well conducted by Martin Yates, spite in some minor, but very clear, trumpet mistakes. Which I am sure will be on place after a few performances. 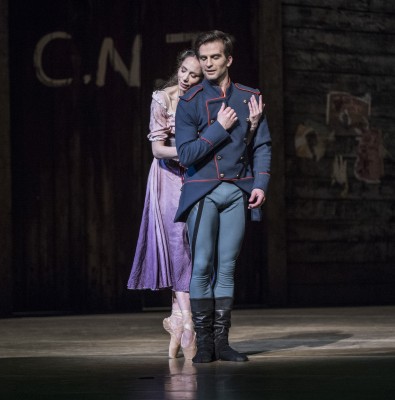 such cases usually require explanation and may result in viagra vs cialis – renal and hepatic dysfunction.