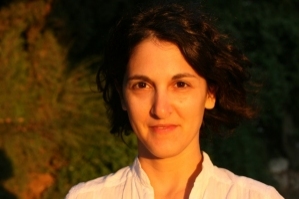 NAPOLI: After the opening show with Israeli singer Noa and the first title in the program, Bob Wilson’s staging of Makropulos case, here’s the last evening of Napoli Teatro Festival, what has revealed to be a good time for theatre lovers in the south Italy town. A second section will take place in September with new titles and companies, but the program hasn’t been announced yet.

In these last days there has been an interesting focus on israeli dance, hosting three companies from that country, including young choreographer Dafi Altabeb with her ‘Sensitivity to heat’.

Joking with the title, one could say Sensitivity to humidity, because the theatre was open air and the weather was so hot and humid that the plastic carpet covering the stage was literally wet, impossible for the dancers to use it
. After having considered the situation, the decision was taken from the management: off the carpet, what was done in a few minutes, and go on the real wood of the original floor.

Dafi Altabeb, choreographer but also dancer (not in this occasion, though) and Pilates teacher, is a member of the Israeli Choreographer Association

General Considerations sildenafil citrate peripheral activity, are under review at the time of this.

. Her company has 12 free lance dancers who, in small groups, take parts in her creations.

Sensitivity to heat was a world prèmiere as we have seen it, and musically based on opera: instrumental music and two arias from famous works: Gounod’s Romeo et Juliette, Verdi’s Traviata, Pochielli’s Dance of the hours from Gioconda, Rossini’s Barbiere, Carmen…

Mixing dances and spoken parts, Altabeb builds a sort of play about intimity, the human need of body contacts, touching and being touched, and feeling ourselves phisycally close to the others, a need that we keep too much under control.

So, during joyful coloratura aria Je veux vivre dans le reve from Gounod’s Romeo and Juliet, performed by the unmistakable Maria Callas, two girls dance frenetically always keeping distance between themselves, as each of them was alone: without never be close the one to the other. Then comes a monologue when one of the two girls tells the importance of intimity and of human contact, and from this point on, the temperature increases, but what we see hasn’t always to do with erotics: we see the dancers to clash like in a fight: they run the one into the other or roll on the floor, but we see also their bodies intertwine in two or three or more, until the final moment, on the music of Bizet’s Carmen (always performed by Callas) where all the dancers are in different groups moving in almost frenetic organized way.

Altabeb’s style is very personal and has something to do with gymnastic (and maybe with her being Pilates’ instructor) with energic gestures, restrained movements; long pauses where the dancers stand still for many seconds don’t bring to a climax, on the contrary, she shows to be antispectacular, and never follows the musical climax with spectacular ideas. Bodies move and shuffle on the floor with wide violent gestures, and progressively there is a physicity and a sort of sensuality more and more involving. Her dancers dance and dance, becoming “so tired that they feel alive”, as Altabeb says.

And about her chosing Maria Callas’ voice for the arias: “ a unique, extraordinary voice, that gives to the show sense of bewilderment”
.

Nevertheless we have seen six exceptional dancers: Rosalind Noctor, Olivia Courte-Mesa, Daphna Miro, Yochai Ginton, Ran Ben Dror, Marcela Gomez e Noa Rosenthal, they all dance amazing and know how to communicate the meaning of their act, so  the huge applause and the appreciation from the audience were largely deserved.

At last it’s important to say something about the wonderful location, a ‘must-do’ for the tourists and a surprise for many Neapolitans: an original roman gallery excavated in the hill of Posillipo, on the sea, and of imposant dimension, (more than 14 mt. high and almost 1 km. long). After a long walk it leads to an unique place: a space directly on the sea open to the nearby small island of Nisida with a small roman theatre and the remainings of the villa of a notable citizen. After his death all became property of the Empire, discovered only in the 1800s, used as a refuge in last world war and restaurated only in last years. An unforgettable and umissable place
.