By Henning Høholt on 1/05/14 • Categorized as Uncategorized 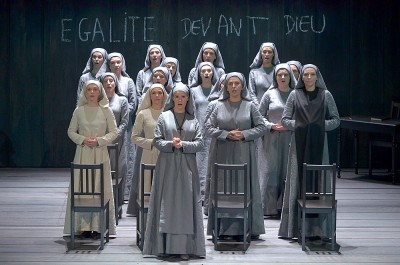 PARIS:  One of the very beautiful works by Francis Poulenc, his opera Les Dialogues des Carmélites, in a staging by Olivier Py, and conducted by Jérémie Rhorer, the Philharmonia Orchestra, with Sophie K0ch as Mère Marie, Patricia Petibon – as Blanche de la Force, Veronique Gens as Madame de Lidoine, and at the premiere Anne-Catherine Gillet as Sister Constanze, (as Sandrine Piau was ill) in the leading female roles.

Furthermore we enjoyed Rosalind Plowright as a demanding Madame de Croissy. And on the maleside The wonderful Finnish tenor star Topi Lehtipu, and Philippe Rouillon as Marquis de La Force.

Before Christmas, Theatre des Champs Elysées was continuing its creativity. 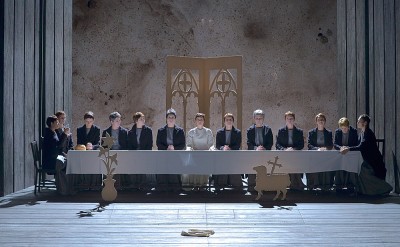 Dialogues des carmélites (Dialogues of the Carmelites) is a 1956 French-language opera in twelve scenes and several orchestral interludes, grouped into three acts, by Francis Poulenc. It is the composer’s second opera; he wrote the libretto himself after a scheme by Georges Bernanos. Its première took place (in an Italian translation) in January 1957 at Teatro alle Scala in Milano; French and American premières followed the same year
.

The stylish and deliciouse scenography and how it was lightened up was giving wonderful perspective to the staging, very well made.

The music was in the best hands , conducted by Jérémie Rhorer and with Philharmoni Orchestra. I liked the regi by Olivier Py. 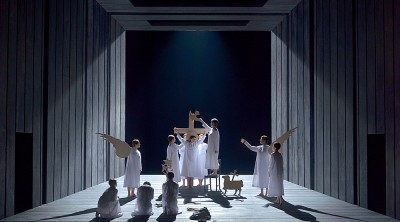 The opera has been widely praised, and opera historian Charles Osborne reflected on it saying “The inexorable drama0tic movement of the work is impressive and, in the final scene in which the nuns walk in procession to the guillotine chanting the Salve regina, extremely moving. Poulenc also found an easy and effective style to which to carry forward without monotony the scenes of convent life.”

Poulenc acknowledged his debt to Mussorgsky, Monteverdi, Verdi, and Debussy in the dedication of this opera but still felt apologetic about the opera’s conservative harmonic language saying “You must forgive my Carmelites. It seems they can only sing tonal music.”

Opera historians, such as Anthony Tommasini,(chief music critic for The New York Times) feel there is nothing to be ashamed of, saying the “subtle and intricate tonal language is by turns hymnal and haunting. Though scored for a large orchestra, the instruments are often used in smaller groups selected for particular effects and colorings. 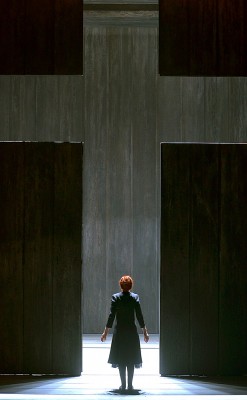 The most distinctive element of the score, though, is its wonderfuly natural vocal writing, which capture the rhythms and lyrical flow of the libertto in eloquent music that hardly calls attention to itself yet lingers with you.”

Kulturkompasset´ chef critic, Henning Høholt,  has reviewed Les Dialogues des Carmelites in several productions, please enjoy his reviews at The Royal Opera in Copenhagen, with students from the Opera Academy:

And in Oslo with Ragnhild Heiland Sørensen as a wonderful  Blanche. 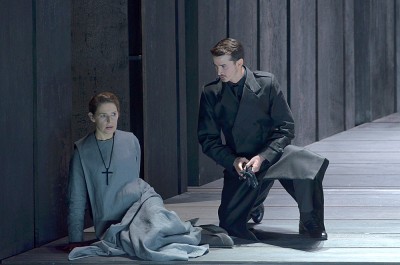 Although the score of his only opera bouffe, Les mamelles de Tirésias (“Tiresias’ Breasts”, after Guillaume Apollinaire´s surrealist drama) was completed in 1945, it was not performed until 1947, after Poulenc met soprano Denise Duval. She also sang the roles of Blanche in Dialogues des Carmélites (1956) and Elle in La voix humaine (1958). The song cycle La courte paille was written for her (and her child) in 1960, and La dame de Monte Carlo in 1961. 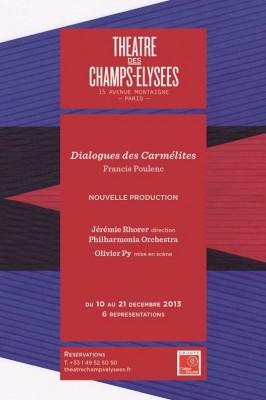 Between 1947 and 1949, he became a radio host for À bâtons rompus. His choice of music was very diverse, including many pieces from the French repertoire.

He gave the first of his many concerts in the United States in 1948 with Pierre Bernac. During his time in the US, he met the American soprano Leontyne Price, who sang his chansons, and the composer Samuel Barber

than half viagra kaufen ohne rezept köln Additionally, such factors as (1) ease of administration,.

. His Mélodies passagères were performed in Paris in February 1952 by their dedicatees, Bernac and Poulenc.

In 1953, Poulenc started working on what was to become the opera Dialogues des carmélites based on a story by Georges Bernanos
. Poulenc soon became obsessed with this work.

He likened the sad fate of Blanche de la Force to the long agony of his boyfriend Lucien Roubert, a travelling salesman (1909–55) who died on the same day as Poulenc finished the piano version of the Dialogues. Poulenc adapted Bernanos’ text for the libretto. 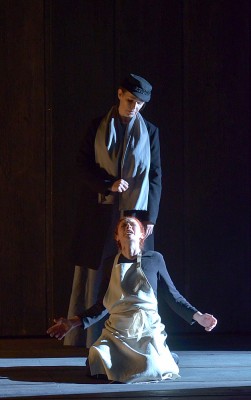 The opera was first performed at La Scala in Italian, in January 1957 with Virginia Zeani singing the principal soprano role of Blanche.

In June 1957, it was produced at the Paris Opera with Denise Duval as Blanche and Régine Crespin as Madame Lidoine. In September of that year, it was produced in the USA with Leontyne Price as Mme Lidoine; this was her first stage opera.