By Henning Høholt on 7/15/13 • Categorized as Festival,Opera 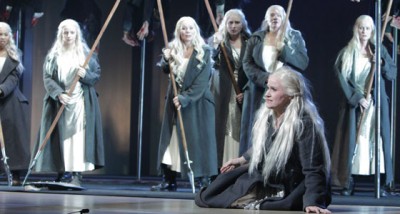 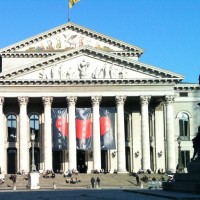 SO 14.07.
Review by Henning Høholt
MUNICH: Allready after the first act it was a love victory allready after first act, the famouse duet between Sieglinde – Petra Lang and Sigmund Simon O´Neill was brilliant a hit in this years Ring.
In Das Rheingold I was disturbed by the 6 female persons running around and disturbing with spotlights. In Die Walküre the app. 20 girls made an atmospaeric room with them staying there with their bakside to the singer and the audience, and with their hand lamps lighting up the intime room they have made around the love duet between Sieglinde and Siegmund, very beautifull.
But when it then came to last act, then it was a new womderful love affair, between Brünhilde – Katarina Dalayman, and her father Wotan – Bryn Terfel. 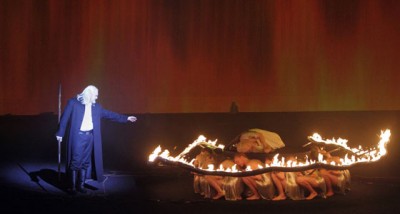 Die Walküre, lst scene, Bryn Terfel as Wotan, in the middle of the flames Katarina Dalayman as Brünhilde.

-This year is my 30 years jubilee for my first Nibelungen Ring, it was here in Munich with Ingrid Bjoner as Sieglinde and in the two last operas as Brünhilde, unforgetable, the one evening As far as I remember, there were 18 calls!!!!In this evening 14.7.  –  It is the first time i was feeling really touched by the farewell between Wotan and his favourite daughter Brünhilde, – the woman sitting close to me was crying, – it was so touching. The two outstanding singers managed to build up an atmosphaere of love and understanding between them and when Wotan then should say the last goodbye to Brünhilde before putting on the fire, the tears was coming
. I also noticed that Bryn Terfel´s voice changed charactere, I had the feeling that he was touced too. Bryn Terfel is an intelligent singer, and he manage to build up a role, which gives an atmospharer to the, – very open, naked – stage, this is extraordinary. 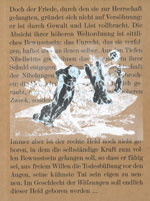 Bayerisches Staatsoper is doing a great job with their programs, deliciouse presented, all needed information, history, backgraound, worth reading.

The Last act started with a part, wher the many female statists were making a 5 minutes show, like to look like horses? on stage. Befor the music to the entrance of the walküries started

never or little blue pill • ED and cardiovascular disease share many of the same.

. It became unison BUH from all the audience. It was a great mistake by the stage director and the choreographer. It didn´t work, still they did a good job, but, please, not in this connection. 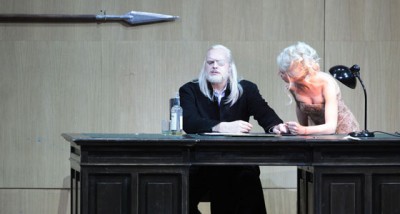 Bryn Terfel as Wotan in die Walküre in Munich.

Please enjoy our review from Die Walküre in Paris this spring: http://www.kulturkompasset.com/2013/02/die-walkure-at-bastille/