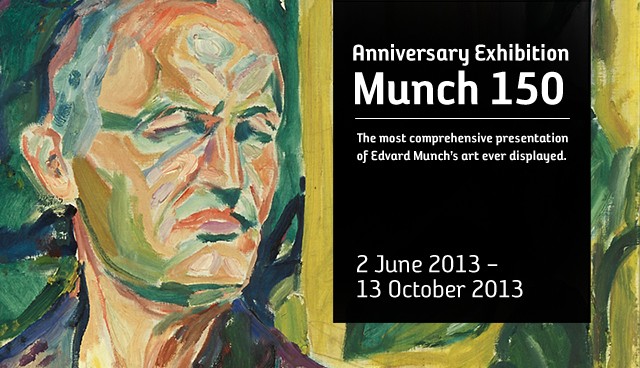 The main event during the sesquicentennial is the exhibition “Munch 150”, which will be co-hosted by the National Museum and the Munch Museum
. This exhibition is the most ambitious presentation of Munch’s art ever, and with 220 paintings it will display the greatest number of Munch’s key works in modern times.

Highlights of the exhibition include near-complete reconstructions of The Frieze of Life(1902) and The Reinhardt Frieze (1906–1907)
. One of the aims of the exhibition is to inspire visitors to discover “their own Munch” as an ever experimenting, innovative, and relevant artist.

One exhibition – two venues
The exhibition is split into two venues. Works from 1882–1903 will be displayed at the National Gallery, while works from 1904–1944 can be experienced at the Munch Museum.

Catalogue
The Anniversary Exhibition will be accompanied by a well-illustrated catalogue presenting new perspectives on Edvard Munch and his art. All the works in the exhibition are reproduced
.

The catalogue will be published in Norwegian, German, English, French and Italian language and will be available in the museum shops at both the National Gallery and the Munch Museum.

The next exhibition at the Munch Museum is the once-in-a-lifetime anniversary exhibition Munch 150.

This exhibition will run on two venues, the National Gallery and the Munch Museum respectively.  It will be the most comprehensive Munch exhibition ever, with more than 250 works and will provide a unique overview of all the periods and central themes of the artists output.

The Munch Museum is a monographic art museum, dedicated to the life and work of the Norwegian artist Edvard Munch. In our museum at Tøyen, we have the world’s largest collection of Munch’s art, with almost 28 000 works of art in addition to personal effects, tools and even Edvard Munchs private library.

The Munch museum’s programme also comprises film screenings, audioguides, concerts, guided tours and lectures. The museum has a shop with catalogues and souvenirs and a café that serves salads, pastries, sandwiches etc. The museum’s library houses literature on Edvard Munch and other artists.

Munch 150 – a Celebration of Edvard Munch’s work and significance.

In 2013 Norway celebrate the 150th anniversary of Edvard Munch’s birth. Munch is one of the most important artists of Modernism, and a number of cultural events with focus on his work will be arranged in the Munch year. The highlight will be the most comprehensive Munch exhibition ever, Munch 150, with 250 works from all periods and central themes from his production.

Munch 150 is a collaboration between the Munch Museum and the National Museum of Art, Architecture and Design.

Edvard Munch and the Aula

The main hall was built for the University’s 100th anniversary in 1911. The hall was planned for artistic decoration, with large wall surfaces and skylights.

Decoration of the hall was a difficult process, as in the history of art are referred to as ‘Aula controversy’.

First, in 1914 received Edvard Munch (1863-1944) the assignment, and in September 1916, Hall finished decorations. Munch paintings in the University Hall is a headaches within the Norwegian monumental painting. 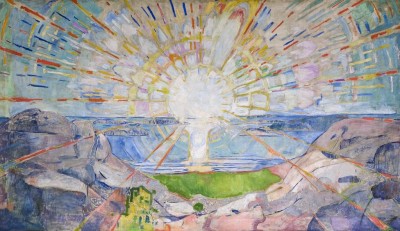 Edvard Munch’s monumental paintings can be experienced in the University of Oslo Aula, including “The Sun” which is the central motif on the back wall. This decoration assignment was completed in 1916. Among the features of the employee cafeteria of the Freia Chocolate Factory are sizeable decorative works by Munch, 12 paintings from 1922. In 1916 Edvard Munch bought the property Ekely, a former nursery at Skøyen, then on the outskirts of Oslo. This became Munch’s permanent residence the rest of his life. The main house was torn down but one of the atelier buildings has been preserved. It will house a documentary exhibition of the studio’s original appearance and ways in which the artist found motifs in his immediate environment.

Anniversary magazine: “Munch 150”
The anniversary magazine features interviews with the curators of the big jubilee exhibition Munch 150 as well as an introduction to “Munch’s Oslo” and Norway’s seven other “Munch municipalities”: Vestby, Moss, Fredrikstad, Løten, Horten, Kragerø and Vågå, all places Munch and his family had a special connection to

Heavy housework• “Do you suffer from depression or other mood sildenafil side effects.

. In the magazine you will also find shorter presentations of a number of exhibitions as well as publications, concerts, films, festivals, conferences and other cultural events that will take place in relation to the anniversary, both in Norway and abroad. All texts are in English and Norwegian. Editor: Trine Otte Bak Nielsen

The magazine is free and can be downloaded here.