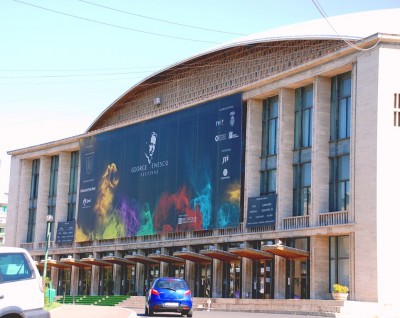 Palace, the largest concerthall, where all the big concerts are being performed in the Grand Hall, the house also has a smaller hall. Foto Henning Høholt

BUCHAREST:  At it’s XXIst edition, Enescu Festival symbolise the most important international musical manifestation hosted by Romania. Notorious international artists performed in Romania during the 55 years of Festival’s existance. This year’s edition is held between 1st and 28th of September.

As usual the Enescu Festival presents great orchestras of the world:

Through the series “Great Orchestras of the World”, the International Festival “George Enescu” places itself amongst one of the top events of this kind in the whole world, managing to bring together established orchestras recognized worldwide, that top the bill in New York, Melbourne or Vienna. Only abroad at big festivals like Lucerne or Salzburg could the same density of big names over only a month be found. Staatskapelle Berlin (conductor Daniel Barenboim), Orchestra Accademia Nazionale di Santa Cecilia (conductor Antonio Pappano) and Royal Concertgebouw Orchestra Amsterdam (conductor Mariss Jansons) are only a few of the orchestras present at the Enescu Festival, the most popular cultural event in Romania and also the most sought-after by the foreigners worldwide. “The Salzburg Festival now has a rival: the great classics are coming to the International Festival George Enescu in Romania, at low-priced tickets”, wrote The Guardian in 2007.

Radu Lupu’s return in Romania is one the major events of the series of recitals and chamber music concerts. „His live sound is irreplaceable. One cannot experiment a similar thing when listening to a recording”, notes The New Yorker. Another notable event is the presence of actor John Malkovich as the narrator of the melodramatic crime „The Infernal Comedy” (with Wiener Akademie).

(SBP > 180mmHg) How long does sildenafil last? number of deaths have been reported in association with.

. Evgeny Kissin, wonder child of the piano, one of the great interpreters of the Romantic repertoire, gives two recitals at the Romanian Athenaeum. The integral concerts for piano by Beethoven is interpreted by a refined collector of autographed scores – pianist and conductor Rudolf Buchbinder. The dramatic history of Borgia dynasty is restored in a musical scenario by Jordi Savall and Hesperion XXI – La Capella Reial de Catalunya.

Atheneum in Bucharest, the most wonderful intime concerthall. Where the interior and the atmosphaere in addition to the concerts is a hit. Photo: Henning Høholt

Amid the late romantic period, the obsession of the XXth century and the most modern artistic expressions, this is the series of opera and ballet. Othello, one of the most important operas by Verdi, a Shakespearian drama which is still modern, with themes like racism, love, jealousy and betrayal that make it present on all stages of the world and also enjoy an international distribution.

Oedipe – Enescu’s masterpiece, that has a psychoanalytic sublayer and an oriental musical tone – is one of the most definite works for the XXth century and is obviously part of the festival’s program
. Vortice Dance Company, the most awarded contemporary dance company from Portugal, presents Dracula (a show that leads the public towards the fabulous and enigmatic world of horror) and Soliloquy About Wonderland (therapy for deception and loneliness of the modern man – a beaming choreographic nocturne). Gigi Căciuleanu creates La Follia in Wiliam Shakespeare – choreographic play for a refined public, at Bulandra Theatre.

Furthermore 21st. Century music and Concerts outside the capital, and a lot more.

Please enjoy the presentation from the 2011 Festival: http://www.kulturkompasset.com/2011/09/the-enescu-festival-bucarest/    Text and photos: Henning Høholt