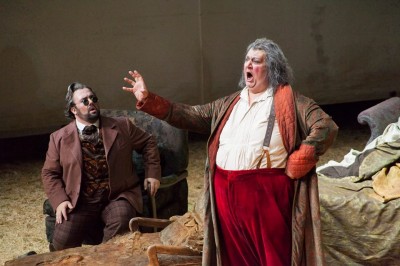 FIRENZE/ITALY: It has been really a big success the recent staging of Falstaff in Florence, under Zubin Mehta and with the stage direction of Luca Ronconi. Verdi’s last masterwork (he wrote it when he was almost eighty) takes place in this staging in the late 1800s, more or less when it was composed. Scenes are by Tiziano Santi and costumes by Maurizio Millenotti. 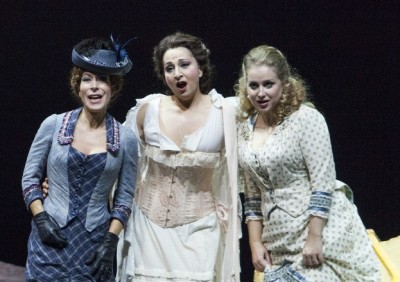 Ronconi himself had already created a different staging of this opera in Florence in 2006, with Ruggero Raimondi as main character. So it is almost inevitable to compare these two editions of an opera of extrahordinary ingenuity, lightness and disenchantement
. Old man Verdi seems to take leave of the world revealing his own concept of life and humanity, touching the most hidden chords of human soul.

Compared to the previous staging in 2006, this one is more schematic and rather poor in first two acts, but oozes creativity in the third, with the beautiful and well staged scene of Herne’s oak as a Falstaff’s dream, an oniric scene, while he is lying on bed. On the contrary, Ronconi’s imagination in first two acts seems to have become dry, the director seems to repeat his own models that now appear tired and abused, such as waving bed sheets delineating the scene, or self-quotations of his own past stagings from the last forty years such as machines or trolleys that come and go on scene. He says that he has represented women on velocypedes to show their wildness and men on locomotives and tractors as symbol of their their solidity, puzzles us and puts us seriously in doubt about how good is the basic idea this performance is based upon. Moreover, the acting of singers is stereotyped and not very carefully directed so that on stage almost only the main character has a particular importance. 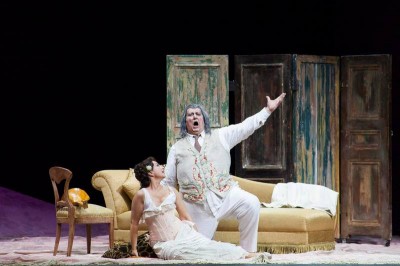 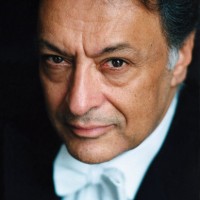 Conductor Zubin Mehta is so refined and detailed in his conducting that he’s on the edge of boredom. He can’t catch the propulsive strength that comes from Verdi’s score or the theatrical life of the different situations. He takes too many pages almost with indifference, and he almost shows that he’s not interested in them

be initiated following a specialist opinion and/or buy viagra online treatments that have been thoroughly tested in.

.
He lets it loose in the nodal points like the end, or Falstaff’s plunge in the river, and few others. Some lacking of balance between orchestra and singers must be stigmatized.

Ambrogio Maestri is physically impressive so it’s easier for him to delineate Falstaff, and interpretatively his character is shady and not very comic. He uses well his imposing and large voice but there is some difficulties in middle and upper register (I’m reviewing the performance of last December 4th). Anyhow the character is well depicted, also if the singer doesn’t catch his many facets.

The young romantic couple, are close to being found. Foto Opera di Firenze

Chinese tenor Yijie Shi is Fenton with his sharp an very light voice, he uses very well his vocal possibilities but the character is depicted in an anonymous and not very passionate way.

We expected much from Alessandro Luongo (Ford). Unfortunately he wasn’t not much over an honest routine, he must still mature the character, both vocally and interpretatively.

Ekaterina Sadovnikova was out of focus as Nannetta, Laura Polverelli was Meg Page and she resulted credible but with vocal imperfections. Elena Zilio as Mrs. Quickly was vocally definitively questionable. Her voice is really disorganized and has no more two equal notes in the texture, even if she’s easy on stage in her acting.

Gianluca Sorrentino as Bardolfo and Mario Luperi as Pistola were only just acceptable, on the contrary Carlo Bosi was Dottor Cajus with steely class.

Orchestra and chorus were on a very good level, the audience that filled out the house was very warm with all the artists, above all with Mehta, Ambrogio Maestri and Yijie Shi.