By Bruno Tredicine on 8/07/18 • Categorized as Festival,Opera

Like every year also in 2018 Kulturkompasset has been in Puglia, southern Italy, for
Festival della Valle d`Itria, now at its 44. year. More and more mellomaniacs put in
schedule the travel to Martina Franca, the wonderful baroque small town where it takes
place, mostly are refined aficionados, considering that this summer event is always about
seldom performed operas, abandoned or forgotten, mainly in bel canto or (like this time)
baroque repertoire. 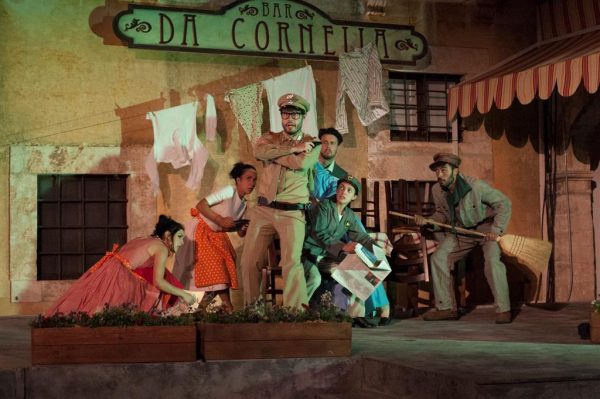 On our first evening, and exactly three hundred years after its prèmiere in Teatro dei
Fiorentini in Naples in 1718, we could see Il trionfo dell`onore, the only comic opera
written by Alessandro Scarlatti, prominent figure in 1700’s Italian music world
.
Born  in Palermo, he was active as musician mainly in Naples and Rome, composed more
than sixty operas and most sacred music, cantatas or Masses. 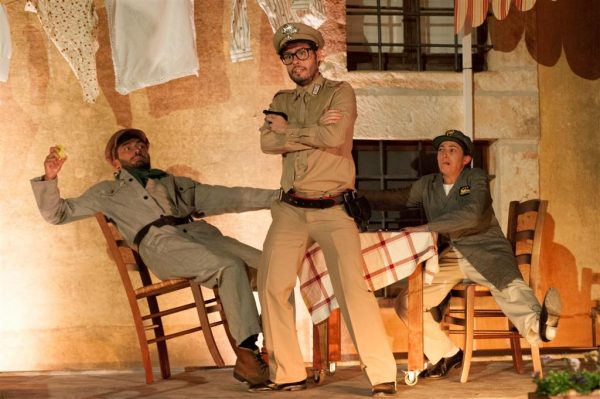 Il trionfo dell’onore (The triumph of love) was surprisingly vivacious, a score full of
theatrical spirit where lyrical and comic moments alternate in full agreement.
The work was forgotten for almost two centuries until 1938 when there was a reprise in
London followed by a staging in Siena, Tuscany, in 1941. Then a recording under Carlo
Maria Giulini in 1950, and a few years later a performance in English in New York, but
often in these occasion the original vocal distribution wasn’t respected. 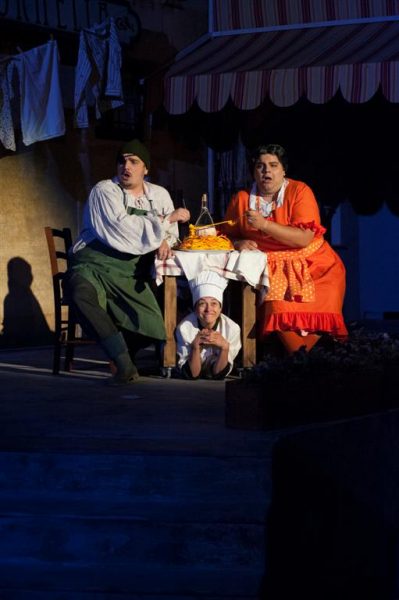 In Martina Franca everything was put back in order, and each role went back to the
original vocal range: a soprano for main character Riccardo (sort of Don Giovanni), a
countertenor for Erminio, assuming that in 1718 a castrato sang this role, even if evirated
were usually not associated in opera buffa, and a tenor (so was the routine in 18. century
for female comic roles) for Cornelia, the old woman looking for love by Flaminio.

As already pointed out, protagonist is a seductor like Don Giovanni, but unlike Mozart’s
(whose Don Giovanni will come a seventy years later) this is a repentant rake and towards
the end when he risks to be killed in a duel by one of his rivals he changes his behaviour
and decides to go on to a solid good life with Leonora
.
The plot is complicated by: three other pairs of lovers are initially attracted by the wrong
partner, until the end when everything comes at its place
. 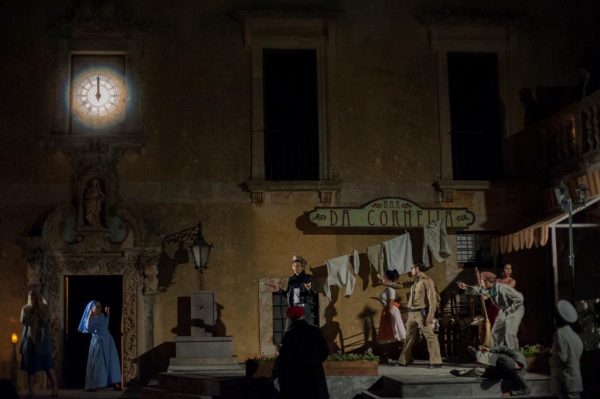 The opera was staged in the courtyard of Masseria Palesi, sort of a farm, a precious
exemple of old country architecture (dating from 17.- 18. century). It offered a perfectly
scene to the staging, under the light design by Stefano Almerighi and with the scenes by
Stefano Zullo, the open space with its arches and the doorway simulates a real piazza in
1950’s Italy with Trattoria, main station and nuns from the convent. 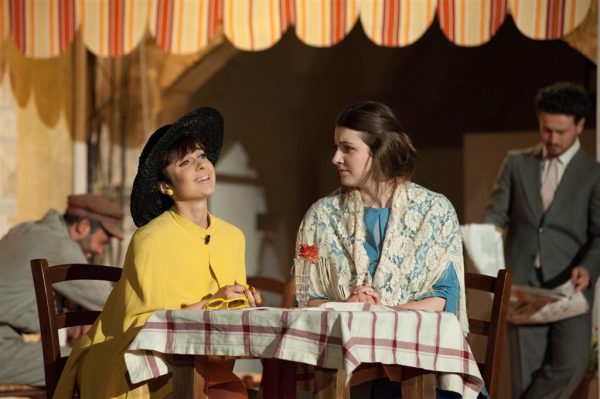 All is seen through the eyes of a child, possibly Riccardo’s grandson, whose initially the
story is told by his father and grandmother. On this background the action takes then starts
with vivacity and no boredom – at the contrary, sometimes too many people are on stage
specially considering how intricated was the story. By-plays or pantomimes often divert the
attention from the singer in action even if sometimes they were really simpathetic, like the
cook offering spaghetti to Cornelia and Flaminio during their duet in a scene openly
recalling Walt Disney epic dinner in Lady and the tramp, but the sensation of “too much“
was constant. The acting of all the singers is spontaneous and they match perfectly the
one to the others both in amusing (sometimes hilarious) and sentimental scenes.
Colourful costumes by Sara Marcucci fit perfectly the different figures: pastel tinted or
witty for the most comical parts, severe for sorrowful Leonora, recalling Audrey Hepburn’s
elegance for the resolute Doralice. 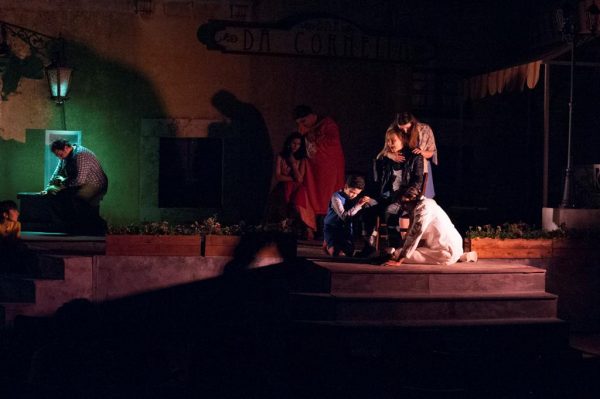 The young singers all got well inside the different roles, showing a perfect teamwork and
commitment to the common purpose

.
With a soft homogeneous mezzo, Erica Cortese depicts well the torments and hopes of
gentle Leonora, offended but at end rewarded by the sincere love of Riccardo. The latter
was Australian soprano Rachel Jane Birthisel, who sang very well undertaking the part of
a male seductor. Trying to be believable as a young man, Birthisel was maybe too frenetic
losing in spontaneity, what is a pity because she has a real stage presence and puts
expressivity in her singing.
Countertenor Raffaele Pe was Erminio (Leonoras brother and in love with young maid
Rosina). In his voice we admired the naturalness of the timbre, soft and enchanting in the
great aria Caldo sangue (actually taken from another Scarlattis opera: Sedecia King of
Jerusalem) rendered with extraordinary intensity
. 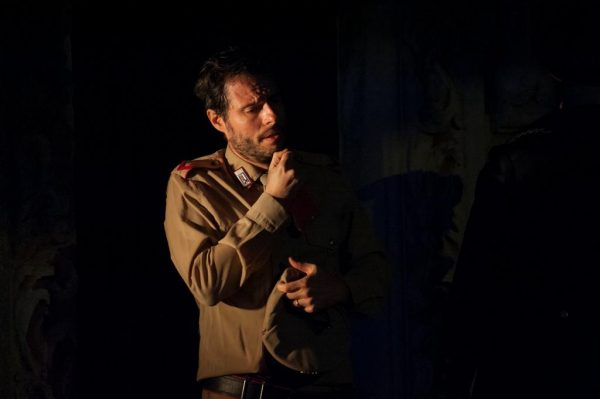 Riccardo’s new flame is Doralice, and soprano Federica Livi integrates her very well
amidst the other characters, and with her lyrical timbre gives her an expressive musicality.
The real comical side was for the two elderly lovers Cornelia and Flaminio, respectively
Nico Franchini and Francesco Santoro. The latter being the uncle of Riccardo, looking for
refuge by him. 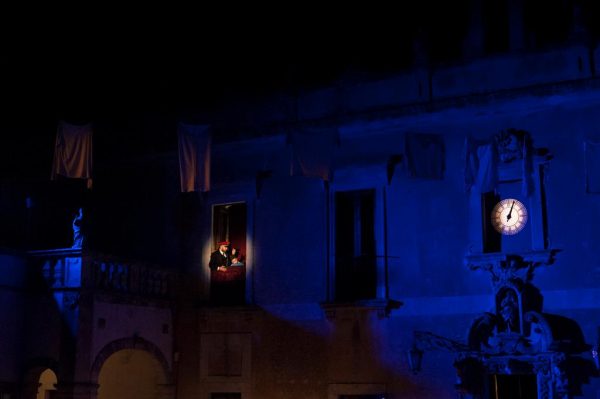 Santoro with his strong tenor gives back the old man looking for young woman first but
then reasonably accepting a romance with Cornelia, who is played en travesti by tenor
Nico Franchini with a humorous characterization and sarcastic accents.
Suzana Nadejde is excellent in the lively portrayal of young maid Rosina: thanks to her
light but solidly substained soprano her rendition is vocally brilliant.
Rodimarte is the unbridled comrade of Riccardo in his adventures: Patrizio la Placa’s
performance, admirably controlled and accurate with his dark baritone on the vocal side, is
sometimes too wild scenically, but in the whole it fits the figure. 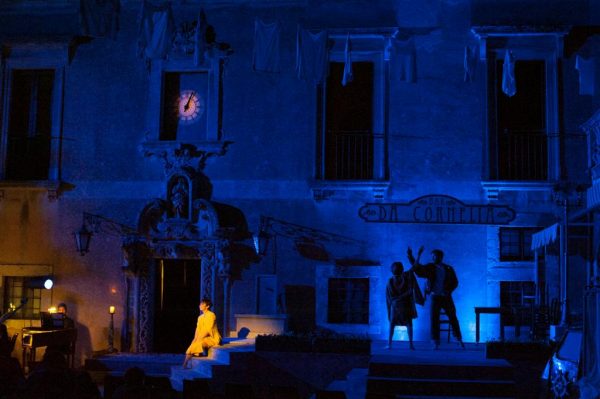 Jacopo Raffaele conducts Ensemble barocco del Festival della Valle d’Itria with
attention and determination in rendering the score’s various humours and musical colours
rigorously keeping the proper style for a baroque opera.
At the end the summer night was filled by applause and smiles from the audience who
filled this enchanting Puglia’s corner.