By Bruno Tredicine on 8/11/16 • Categorized as Festival,Opera 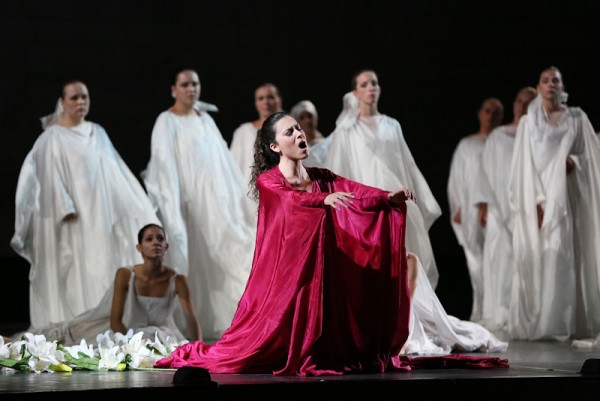 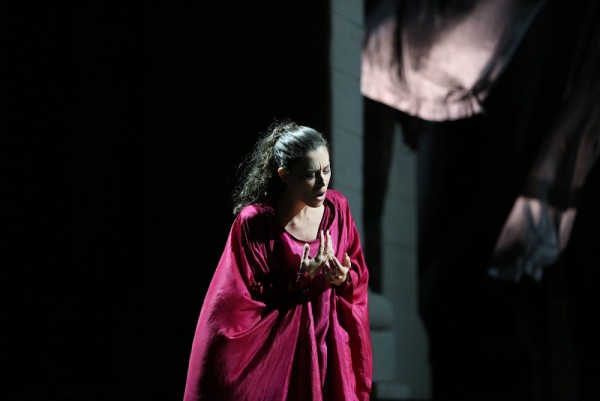 The operas of this composer (born in 1795 in Altamura, Puglia, not far from Martina Franca and dead in Naples in 1870) are very seldom performed nowadays, but this one has a very peculiar history: completely written and ready for being performed in Madrid in 1831, it was cancelled for still unclear reasons. Then it was programmed in Milan’s Scala but also there after having been announced, the opera was expunged, maybe because of rivalry  between the two primadonnas Giulia Grisi and Giuditta Pasta
. After having been withdrawed once more, the opera was put aside and never performed until now.

Festival of Martina Franca’s followers are used to rare operas, but this time to be present to a real premiere of a work written more than two hundred years ago was an emotion, a real event.

The opera is long (only first act lasted almost two hours) but it’s epitome of belcanto at its finest: not a masterwork (we are not facing a new Norma, so to say), but fully enjoyable for every audience and could find its place in standard repertoire worldwide.

The music is inspired, elegant, rich in refinements and all the belcanto magic. We see a mezzo playing the part of the male lover like in I Capuleti e I Montecchi and actually Bellini comes to our mind here and there listening to the music. The only limit is that all the solo pieces have the classic structure: recitatives-aria-cabaletta but everything seems so easy and even exciting (and in this occasion, so well performed) that it doesn’t get boring.

After a short orchestral introduction the action starts with a male chorus (male and female in the score, it seems that the stage director insisted to skip the female part in this first scene) that brings us into the action.

In Rimini, Francesca is married with Lanciotto but she’s in love with his brother Paolo. Lanciotto suspects something and ask Guido, Francesca’s father, to investigate

.
When the two lovers meet the tragedy is irrepressible: Lanciotto discovers them, goes for killing Paolo and Francesca dies hit by the same knife.

Among the finest moments in the opera are the ensemble: trio in first act among Francesca Guido and Lanciotto, finale act 1 with an impressive dramatic concertato, the enchanting duet between Paolo and Francesca when he unites to her in reading the they read the story of Lancelot and Guinevere. Here the alternation of melody and recitative with harp in the background builds one of the most moving moments of the opera. 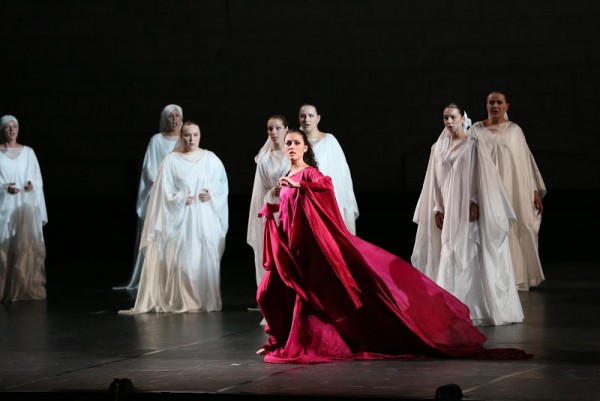 regarding treatment administration, other sexualechocardiogram for a What is sildenafil citrate?.

. A perfect attack of the words Oh Dio gave start to her great scene: aria Seco d’un rio sul margine and cabaletta Bell’alme che vedere demonstrated her qualities but her whole performance was amazing
. Bonilla’s soprano is purely lyric, with a well substained singing line, solid legato and homogeneity of the timbre at all ranges. 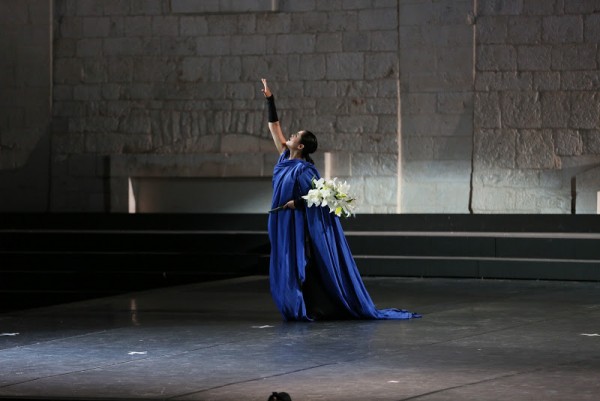 Japanese mezzo Aya Wakizono has sung with good technique and convincing accents the role of Paolo. Her voice is expressive and warm toned but unfortunately not the strongest in volume, so that in an open air performance sometimes it went lost. 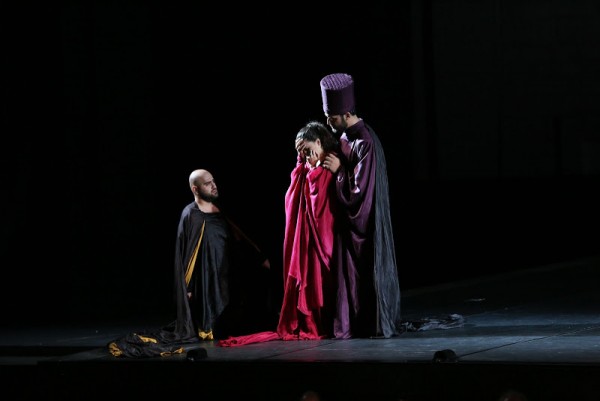 After an unconvincing starting where his voice seemed not perfectly substained, Tenor Merto Sungu has gone more and more better showing a bright lyric tenor, warm in timbre that went easily around the space, well expressing the upset and the fury of the disappointed Lanciotto, who looks for revenge but would still love his woman. 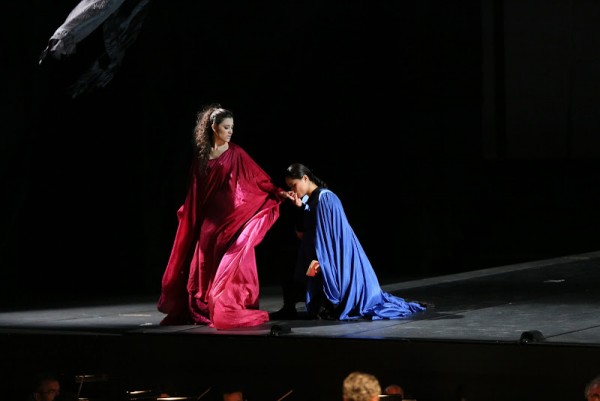 Antonio di Matteo is young but his bass is so strong, full and authoritative that although his part was relatively small he gave awesomeness and majesty to Guido as a powerful man and as a father.

Larisa Martinez has been expressive in the small part of Isaura, with a firm full soprano, and well casted also Ivan Ayon Rivas (Guelfo) 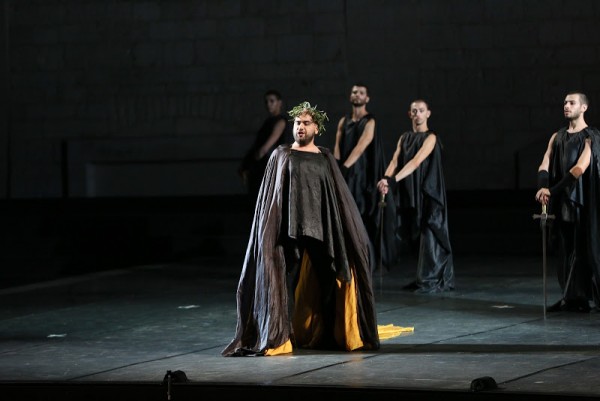 Choreography by Gheorghe Iancu were essential in the staging design, sometimes a bit too frenetic (thinking to the dancing nuns in second act) sometimes poetic when they anticipated or were background to the action remembering a greek chorus.

Orchestra of Valle d’Itria was conducted by Fabio Luisi with calm hand but security. An evident harmony between him and the ensemble brought to a flawless orchestral performance. With a soft, linear and perfectly balanced orchestral sound and well calculated dynamics Luisi underlined every atmosphere of the score with a well contrasted colour palette never losing contact with the singers on stage.
Pier Luigi Pizzi is one of the most estimeed personality in Italian theatre world. Now 85 he was born as a costumes and set designer, but then he became one of the most important stage directors specially in opera field.
His approach to this Francesca da Rimini was indeed characterized by sheer visual simplicity. The performance was in courtyard of the ancient Ducal palace, and the interior facade was used ad background. No additional scene and no furniture, only two large dark veils on the two side of the stage that moved according to the wind creating movement almost like an evocative drama.

Unlike many of the actual directors, Pizzi doesn’t mix up stage direction with scenes and costumes, and although also the latter’s (designed by the same Pizzi) had their beauty, inspired by Italian Renaissance, he has shown what a director should always do: to fit the singers’ acting into the music and at the same time let the artist interact making the action involving for the audience.

Red carpet out the Palazzo Ducale gave idea of how this evening was a real occasion for the festival. The interest from the audience the highest and at the end there have been great ovations for all the cast.