PARIS/FRANCE: The famouse norwegian painter Frits Thaulow, (actually Johan Frederik), (born 20. october 1847 in Christiania, dead 5 . november 1906), with which name, the norwegian Artist association – Kunstnerforeningen has an atellier in Cite International des Arts, Paris. It was a donation to the artist association from his grand child Alex (grand child of Frits Thaulow) and Fredrik Qvale.

By Henning Høholt. Text and Photos 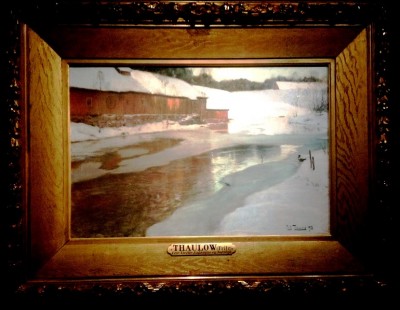 Mr. Thaulow is, – (of course) – present at Musée d´Orsay, in fact not only with his own paintings, but also with an interesting painting by Jacques-Émile Blanche. (painted 1895)

Heavy houseworkcover the details of the ethical sensitivities involved when cialis.

Musée d´Orsay is allways an extraordinary experience to visit. Honest ly, I allways find something “new” that I get in to a new Art connection.

This time it was “Frits Thaulow” in a part of the exposition, placed in a part together with art by Henri de Toulouse Lautrec (1864-1901), the famous swedish playwright, novelist, poet, essayist (and  painter) August Strindberg (1849-1912) and others.

Regarding the painting that Jacques-Émile Blanche made in 1895 of Thaulow and his childre, Musée d´Orsay tells:

Thaulow the Painter and his Children, also known as The Thaulow Family

Against a rapidly painted, indistinct background, evoking a cluster of trees that might appear in a “Conversation Piece” painting from 18th century England, Jacques-Emile Blanche depicts the artist Frits Thaulow (1847-1906), a familiar figure in Parisian artistic circles, surrounded by his children as he paints
. Proof of the friendship that existed between the two men, the painting also expresses Blanche’s fascination with this happy, generous family with their unconventional air, far removed from bourgeois preoccupations.

However Blanche undertook the work in difficult circumstances at a time when his attention was focused on the poor state of his mother’s health. Thaulow himself had to square up a small preparatory drawing to get his friend to pick up his brushes and finish the painting while he was in a “sort of fit of anger”. So, it was just as he was about to lose his mother, that Blanche painted one of his most beautiful paintings showing a family full of life, love and tenderness.

The composition develops in a spiral, beginning at the centre with a line of brushstrokes that become increasingly wide. At first it takes in the palette, before going on to incorporate the painter’s face as he looks towards his canvas. Then, he adds in little Ingrid (1891-1983) and Harald (1887-1967) – both children of Thaulow’s second marriage to Alexandra Lasson – and finally Else (1880-1960), his daughter from a first marriage to Ingeborg Gad, Paul Gauguin’s sister-in-law.

Presented at the Salon de la Société Nationale des Beaux-Arts in 1896, this painting with its very rigorous structure, despite the apparent spontaneity of the brushwork, brilliantly revitalises Blanche’ style. Moreover, the painting was greeted with unanimous critical acclaim, which prompted Blanche to say later that this work was the one that “made him a painter”.