PUBOL/SPAIN: We visited the interesting and flamboyant Gala- Dali Castle
. and old ruin that Salvador Dali bought in 1969 and restored it to make this to be the residence of his wife Gala.

El Castell Gala Dalí de Púbol. The Castle of Púbol Castle, also often called the Gala Dalí Castle, is in a tiny village called Púbol near Girona. It is about 1 hour by car from Barcelona.

In the 1930ies Dalí promised his wife Gala a palace and in 1969 he made good on that promise. Dalí bought and decorated this late fourteenth and early fifteenth century castle run in the village of Púbol near Girona and to Santuari dels Àngels where Dali and Gala were married in 1958. 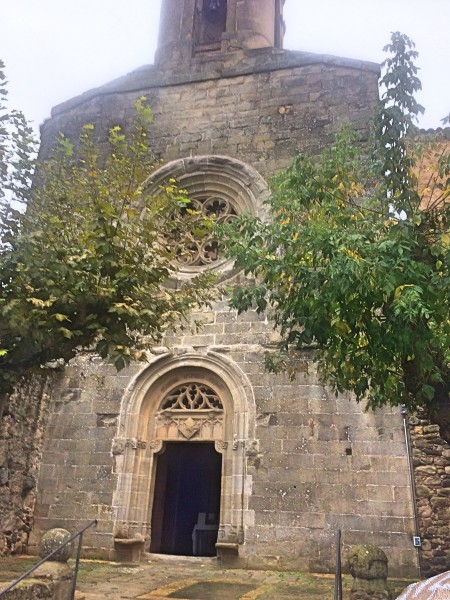 Dali restored it completely in his flamboyant and original style as a small but palatial residence for Gala even installing a throne room. Gala lived here from until her death in June 1982 aged 87.

She actually died at their house in Port Lligat in the early morning of 10th June 1982, but her body was transported to Gala Castle in their Cadillac car by Dali and his driver. The very same Cadillac is still in the garage at Castell Gala Dalí and Gala is interred in the crypt at Castell Gala Dalí in the cellar room known as ‘el delma’, which was the ‘sala del diezmo’ storeroom, where gifts brought by villagers as tithe taxes, were stored. 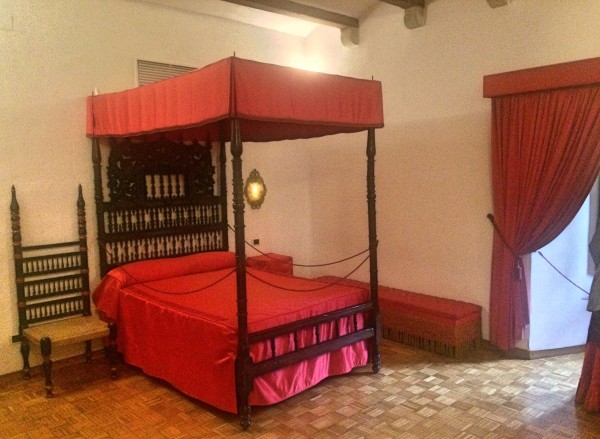 While Gala lived in Gala Castle, Dalí was only permitted to visit if he had a written invitation from Gala. When she died, Dali moved out of Portlligat and into the Gala Castle to be closer to her. This was his last studio from 1982 to 1983. 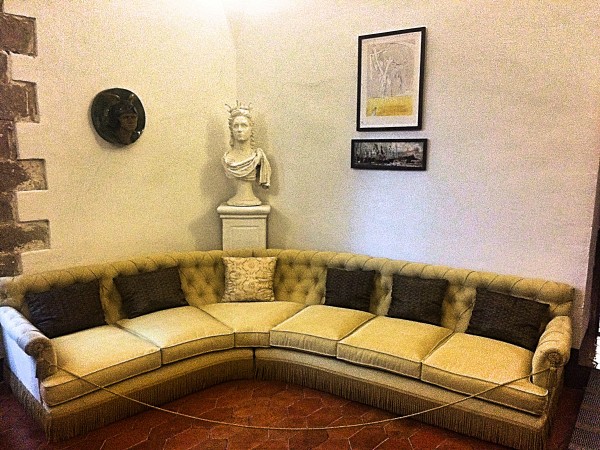 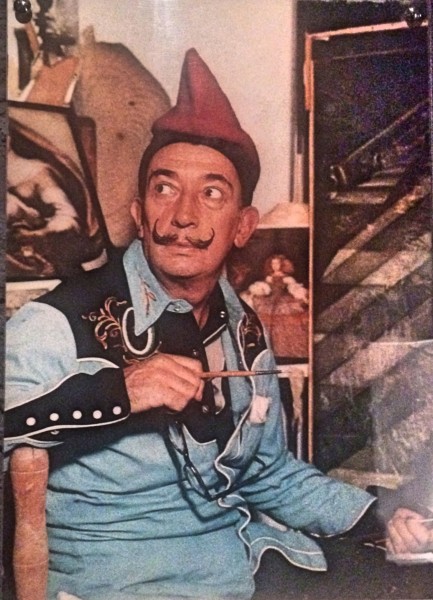 From 1983 then he was not able to paint anymore because of Parkinson’s disease.

In 1984, a fire broke out in Dalí’s bedroom – apparently from a short-circuit causing sparks from his electrical nurse bell.

Dalí suffered quite severe burns to his leg and arms and after this incident he was persuaded by friends to move to Torre Galatea of his Theatre-Musuem in Figueres, where he became a recluse and was rarely seen until he died six years later.

Dali passed away while listening to his favourite Wagner music, Tristan and Isolde.

Two tombs were prepared in the crypt of Gala Castle in Pubol, but Dali¡s deathbed wish was to be buried in the museum in Figueres.

El Castell Gala Dali has also been left the way it was during the years Gala and Dali lived there. A fascinating final chapter to their life together. 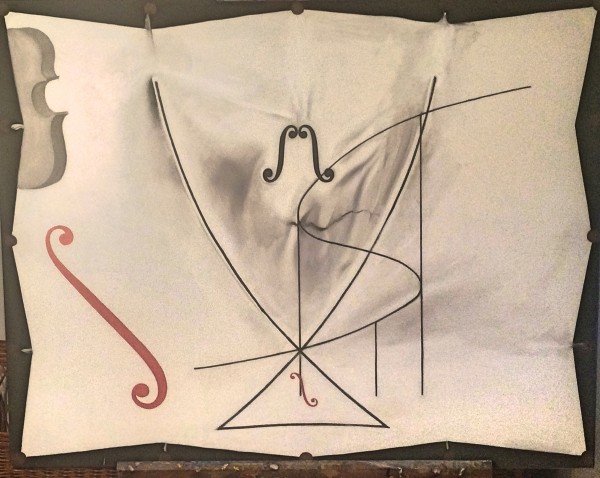 Dali picture on the working stafeli. 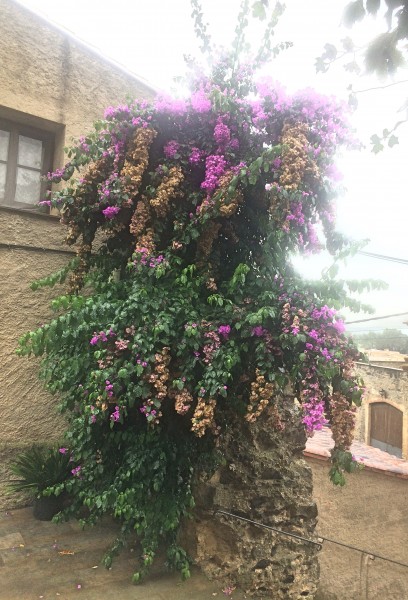 Dali: bougainvillea by the entrance to the castle.

In a signed article Salvador Dali refers to Gala and to the Castle:

“I give you a Gothic castle as a gift, Gala.

I accept, with one condition, which is that:

You only come to visit me at the Castle on invitation. I accept, since I accept everything in principle, on condition that there are conditions.

It is the same condition as courtly love”. 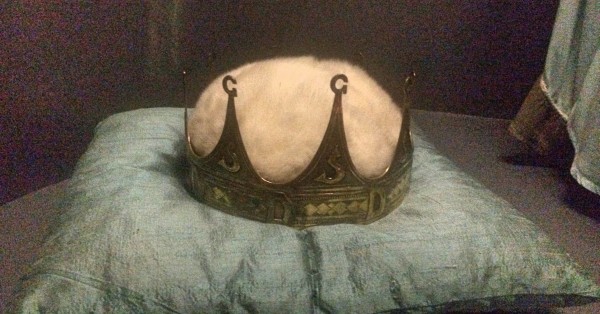 The Gala-Dalí Castle of Púbol, was opened to the public since 1996

. Visitors can discover the medieval building in which Gala infuses Salvador Dalí‘s creativity right down to the finest details, and which goal was  to provide Gala with a quiet and secluded place
. It was the time passing that determined the transformation of this castle that became, between 1982 and 1984,  Salvador Dalí’s last studio and finally the mausoleum of his muse. 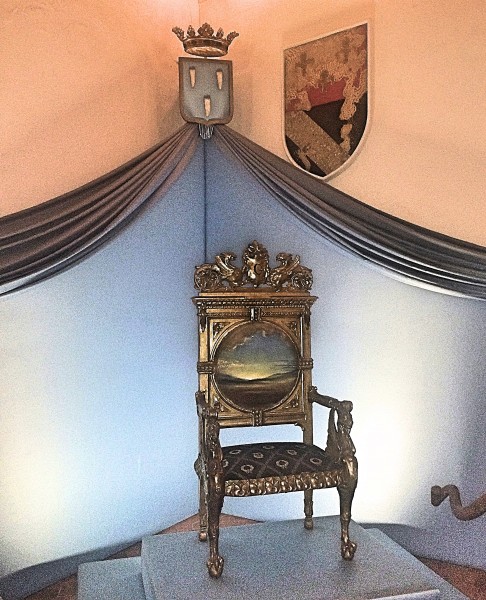 In the entrance hall we found Dali´ Throne chair.

The basic structure of this building – that already existed in the 11th century- consists of three storey’s arranged around a high and  narrow courtyard. The castle dates back to the  period of splendor of the barony of Púbol in the second half of the 14th century and  the beginning of the 15th century. 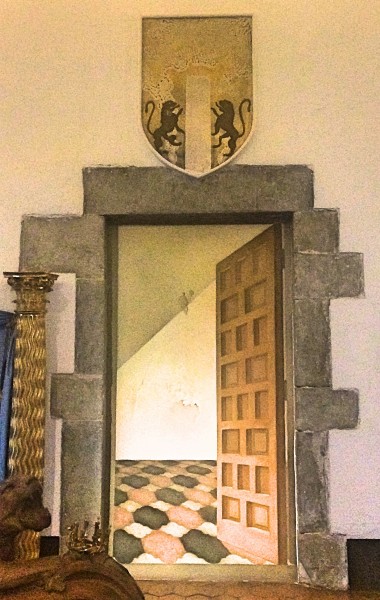 When Dalí bought the castle it was in a very poor state, with collapsed ceilings, substantial cracks and a much neglected yard. However, it gave the house a very romantic atmosphere that the Dalí couple appreciated and tried to retain during the restoration work they undertook. Therefore the outside structure was consolidated but  the marks of time were left in order to preserve the old appearance of the house. Salvador Dalí used the walls and semi-collapsed ceilings in a very intelligent way, creating unsuspected spaces of very different sizes. 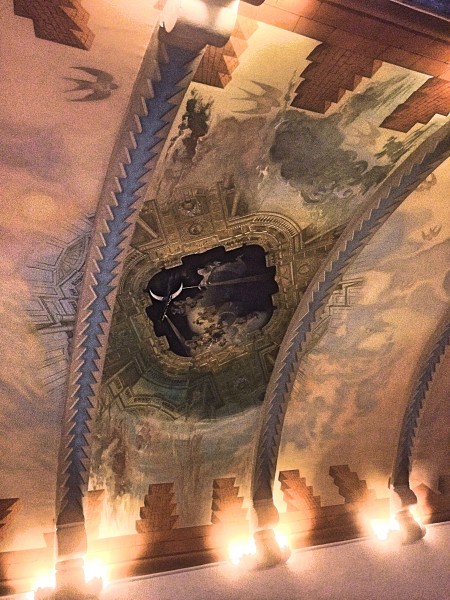 The interior decoration was made of  pictorial representations on the walls, false arquitectures, baroque textiles, antiques, romantic symbols, etc. The result is a closed, mysterious, private, austere and sober place, with spaces of great beauty, such as the former kitchen converted into a bathroom or the Piano Room. 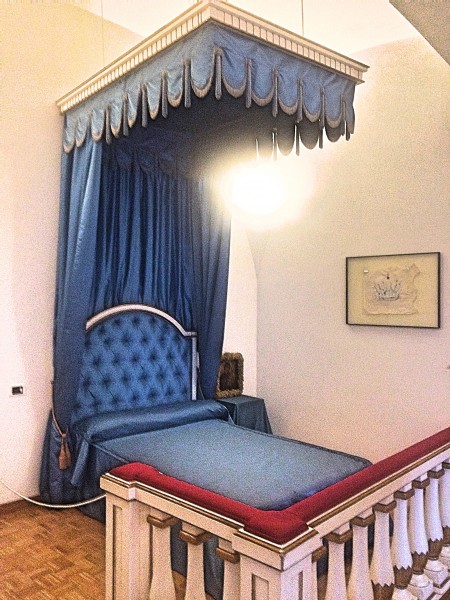 The blue bed room, suppose to be Gala´s

Dalí refers to the Castle in his written work: it is interesting to note how in Confessions inconfessables (1973) he presents it as a continuation of Portlligat – precisely through the Round or Oval Room (Gala’s place), understood as a space dedicated to his wife and to the ideal of love. This association is  clear in the following paragraph: 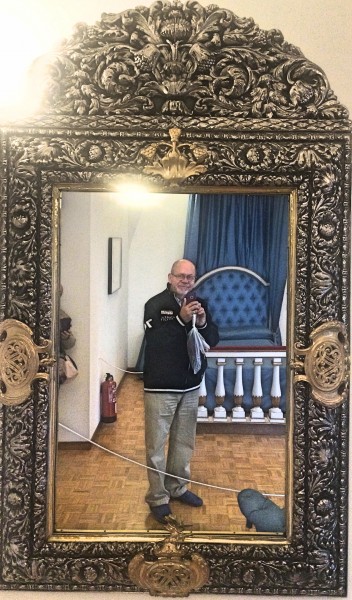 Dali bedroom mirror (with the photographer)

“Everything celebrates the cult of Gala, even the round room, with its perfect echo that crowns the building as a whole and which is like a dome of this Galactic cathedral.

When I walk around this house I look at myself and I see my concentricity. I like its moorish rigour. I needed to offer Gala a case more solemnly worthy of our love. That is why I gave her a mansion built on the remains of a 12th century castle: the old castle of Púbol in La Bisbal, where she would reign like an absolute sovereign, right up to the point that I could visit her only by hand-written invitation from her.

I limited myself to the pleasure of decorating her ceilings so that when she raised her eyes, she would always find me in her sky”.

Púbol Castle is thus a highly significant place in the Dalinian creation: it is a continuation of Portlligat with a personality of its own
. It is Dalí’s gift to his wife Gala, to whom he took an oath of allegiance  and where  he could not gain access without written permission from her. 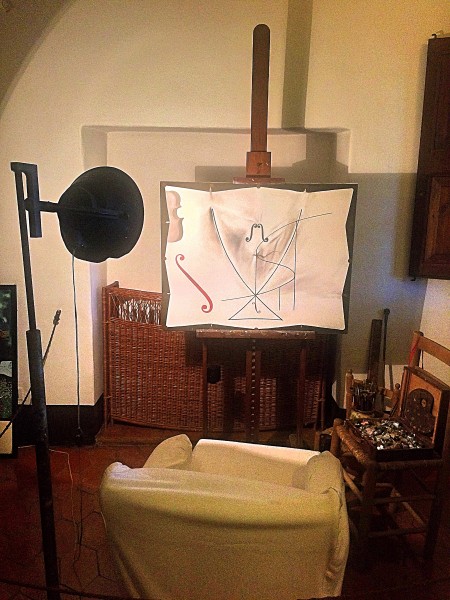 A working place where Dali has been working is in a corner, with a nice shadow full terrace outside the door.

In the basement it even has a large crypto, where two large caves was prepared for the funeral of Dali and  his wife, and where she is laying.

Unfortunately, some years before he died, he changed his former decision of being graved there, so therefore the one cave is empty.

Of course in an art historical way and at rainy day, to spend time for a tour to the Dali Castle os ok, but in Spain it is possible to find much more interesting sights. 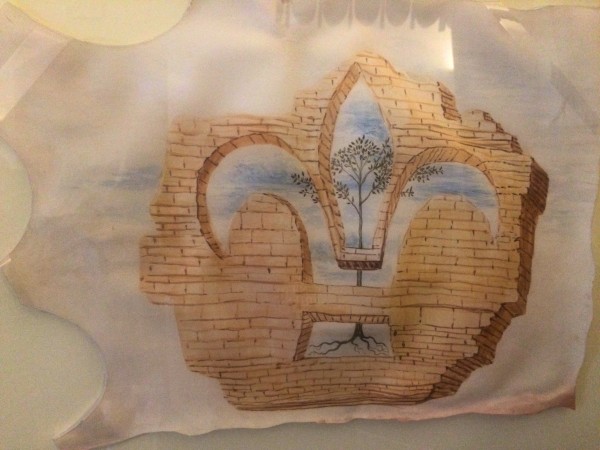 The castle is interesting as a part of the artists life, but, honestly, i was not really impressed. Specially i was missing impressing pieces of the art by Dali. 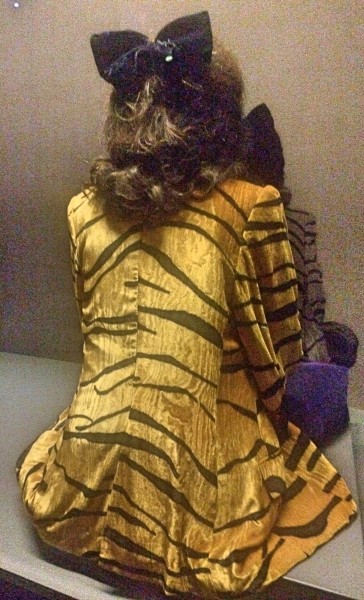 However, I hope this large photo reportage, still presents many interesting details from the Gala Dali mansion in Pubol.

In the exposition is also a large expo of outfits that Gala was using, and even a few outfits for Salvador Dali.

What I was missing was some of the world famouse painters good works, paintings, lithographies, and other of his works. That part could be developed to the best of the castle as an even better tourist magnet.

I would too hav appreciated to have enclosed a small cafe in the garden.

As after the sight seeing through the Gala Palace, I would have appreciated to have the possibility to sit down and relax in the beautiful garden and enjoy the whole atmosphere. 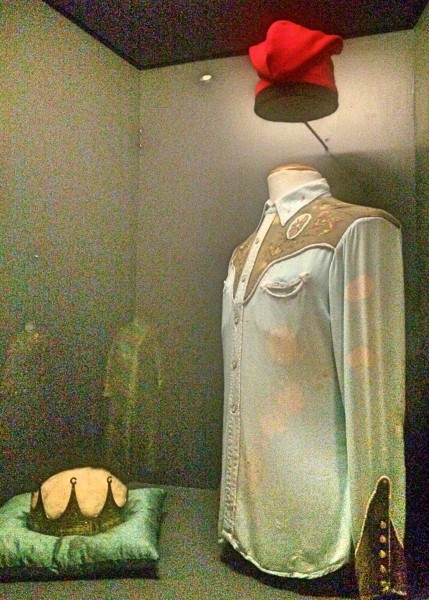