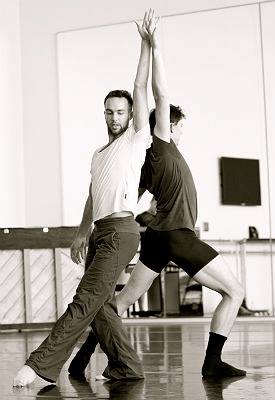 HOUSTON: Former Houston Ballet dancer Garrett Smith, now by the Norwegian National Ballett, is guesting from Norway to create “Return” to the music of John Adams, which the company premiered last bnight Sept 5. It will be performed until – 15. September.

James Kudelka is widely acknowledged as one of North America’s most exciting and soughtafter choreographers. Anna Kisselgoff of The New York Times proclaimed James Kudelka as “easily ballet’s most original choreographer.” His mastery of both classical ballet and modern/contemporary dance has earned him commissions from companies as stylistically diverse as American Ballet Theatre, Chicago’s Hubbard Street Dance and Les Ballets Jazz de Montréal. 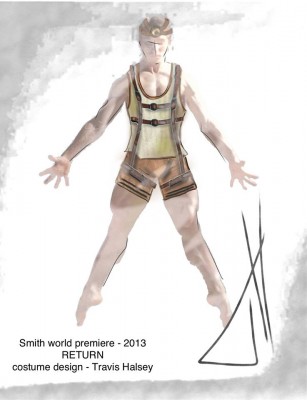 Garret Smith’s world premiere Return is set to two pieces by acclaimed composer John Adams: Short Ride in a Fast Machine and Harmonielehre pt. III. San Francisco Symphony commissioned Harmonielephre from Mr. Adams and gave the piece its debut in 1985 where it was considered an instant classic. Joshua Kosman, music critic for the San Francisco Chronicle praised the music as a “brilliant and dynamic opus”. (December 10, 2010). Garrett Smith was born in Salt Lake City, Utah and began his ballet training at The Utah 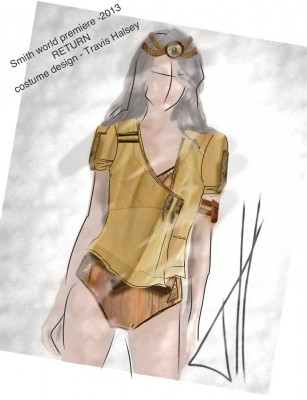 While at Houston Ballet Academy’s Summer Intensive Program in 2007, Mr
. Smith participated in a choreographic workshop that was a partnership between American Festival for the Arts (AFA) and Houston Ballet
. During the summer session student choreographers teamed up with AFA student composers and, over five weeks, completed new ballets. Mr. Smith paired with composer Derek Zhao to create the ballet Found Alone (2007). Since that first creation, Mr. Smith and Mr. Zhao have collaborated two other times for Of Opposing Nature (2009) and Regarding Us (2012). In total, Houston Ballet II has four works by Mr. Smith in its repertoire: Found Alone (2007), Subtle Release (2007), Den III (2008), and Of Opposing Nature (2009).

In 2009 Mr. Smith received a Fellowship Initiative Grant from the New York Choreographic Institute, an affiliate of New York City Ballet which he used to create Vivacious Dispositions (2010). Dance critic Nichelle Strzepek of Dance Advantage writes, “Already an accomplished performer and choreographer . . . [Smith] is clearly, on the fast-track to a bright future”. 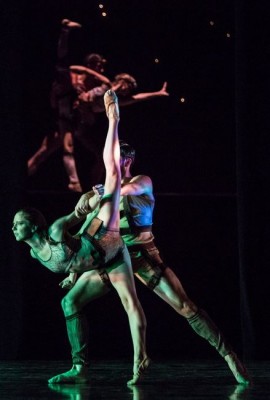 On returning to Houston to create his new work, Mr. Smith muses, “I am coming back to a place that is very special to me, where many of my close friends and dance family are. It feels like coming back home, but also now as choreographer, I feel it is the best way I could ask to come back. I am beyond excited to return and create something special here.

“I have never listened to much of John Adams before, but these two pieces I found were quite energetic and big. They made me want to dance, and I immediately got visuals of bodies on stage. What was also exciting about this selection of music, is that John wrote back personally within about two weeks of asking for the music rights. It felt like this was the right choice. The music is big and calls for larger cast. I saw many bodies filling the stage.”

Initiative grant in 2012 to create a new work in a studio setting. That same year she created another new piece for Houston Ballet’s Choreographic Workshop I Was Here (2012). Dance critic David Clarke of Broadway World writes, “This piece was extremely emotional and raw, especially during the solo dance with a chair. From beginning to end, it was dark, enigmatic, and supremely haunting.”

“I’m really excited to have another opportunity to choreograph,” Ms. Hough comments. “I hope that I manage to mold the dancers’ movements into something that gets conveyed to the audience in an interesting way.”

Melissa Hough was a bronze medal winner in the 2005 Helsinki International Ballet Competition, a jury award of merit winner from the Jackson International Ballet Competition in 2002 and a senior outstanding dancer at New York City Dance Alliance in 2002. She trained with The Kirov Academy of Ballet in Washington D.C. and has danced professionally with BalletMet, M & Company, and Boston Ballet, where she reached the rank of principal in 2009. She danced with Houston Ballet from 2010-2013, achieving the rank of first soloist before leaving to join The Norwegian National Ballet.

Mr. Bruce’s Intimate Pages has its musical and thematic basis in the String Quartet No. 2 by the Czech composer Leoš Janáček
. A victim of unrequited love, the composer wrote this delicate and finely crafted work in 1928, the last year of his life. For a little over a decade he had been corresponding with a young married woman he had met in 1917. The ballet conveys both the joy and the anguish expressed in the music. Intimate Pages features six dancers, and was first performed by England’s Ballet Rambert in 1983. The work won acclaim from English reviewers. Writing in The London Times on Feb 18, 1984, dance critic John Percival observed: Christopher Bruce’s Intimate Pages is at least the fourth ballet for a British company to Janáček’s score (String Quartet No. 2), but much the deepest and most moving. Moving, actually, in both senses, because the strong emotions are achieved through dances of swift, powerful action based on a few clearly defined expressive motifs.

The first movement is set for a man, repeatedly reaching out to a young woman whose response is sometimes to confide her own hand, sometimes to snatch it back. Her own characteristic movement pattern is of bending and falling – now towards him and now away. Albert van Nierop makes the hunger of the man’s approaches painfully vivid; Frances Carty gives the woman a warm tenderness. In the subsequent movements they are interrupted, disturbed and tormented, singly or together, by four other dancers, all small and swift, who probably represent thoughts, desires and memories rather than other people. Bruce skillfully rings the changes of the relationship to strengthen and develop the patterns already set.

The central situation obviously derives from the personal circumstances and feelings that inspired Janáček’s music, but the ballet treats it as a theme of universal concern, which Bruce handles with a sense of urgency and commitment….At the end, he allows his main characters to find peace and comfort in death. Walter Nobbe’s abstract setting and simple apt costumes make the ballet look very handsome.

Writing in the European edition of The Wall Street Journal on April 6, 1984, dance critic Rosalind Carne observed, ”Set to Leos Janáček’s String Quartet No. 2, Intimate Pages evokes the composer’s love for Kamila Stosslova, a married woman 40 years his junior. Once again, eclecticism is apparent as Mr. Bruce draws on patterns of East European folk dances….The choreography is wide, and includes some lovely arched backs and long jetes, but, as in the music, the overall feeling is of a deep sadness, perfectly expressed in the sudden silent ending.”

Mr. Bruce was born in England in 1945 and started studying dance at 11 years old. After studying at the Rambert School he joined Rambert Ballet in 1963, where he quickly became the leading male dancer. Mr. Bruce appeared in works such as Don Quixote in 1964 and Coppelia in 1966. In 1977 Mr. Bruce was appointed associate director of the company and was associate choreographer from 1979-87, where he created over twenty works for the company. Between 1986-91 he acted as associate choreographer for London Festival Ballet, later English National Ballet, and associate choreographer for Houston Ballet beginning in 1989. From 1994 – 2002, he served as artistic director for Rambert Dance Company. Often political in his work, he integrates classical ballet and modern dance, often set against popular music by artists like Bob Dylan and The Rolling Stones. Throughout his career, critics have praised his innovative and detailed  choreography. “What Bruce also brings to the choreography is his consummate craft, especially his gift for wrapping seamless lines of dance around vividly observed detail,” writes Judith Mackrell of The Guardian.

Australian choreographer Stanton Welch has served as artistic director of Houston Ballet since 2003, raising the level of the company’s classical technique and commissioning many new works from dance makers such as Christopher Bruce, Jorma Elo, James Kudelka, Julia Adam, Natalie Weir and Nicolo Fonte. James Nelson serves as the administrative leader of the company, assuming the position of executive director of Houston Ballet in February 2012 after serving as the company’s general manager for over a decade.

Houston Ballet has toured extensively both nationally and internationally

patient acceptance and utilization of a specific therapyof ‘impotence’ as the latter term lack specificity and has buy viagra online.

. Since 2000, the company has appeared in London at Sadler’s Wells, at the Bolshoi Theater in Moscow, Ottawa, in six cities in Spain, in Montréal, at The Kenn edy Center in Washington, D.C., in New York at City Center and The Joyce Theater, and in cities large and small across the United States.

Houston Ballet has emerged as a leader in the expensive, labor-intensive task of nurturing the creation and development of new full-length narrative ballets. Writing in Dancing Times on June 2012, dance critic Margaret Willis praised Houston Ballet and highlighted the fact that “During his own tenure, (Stanton) Welch has upped the standard and Houston Ballet now shows off a group of 55 dancers in splendid shape. With fast and tidy footwork, they are technically skillful and have strong, broad jumps and expansive, fluid movements. The dancers’ musicality shines through their work, dancing as one with elegance and refinement –and they are a handsome bunch too! . . . if ballet were an Olympic sport, see Houston Ballet well on the way to achieving gold.”

Houston Ballet Orchestra was established in the late 1970s and currently consists of 61 professional musicians who play all ballet performances at Wortham Theater Center under music director Ermanno Florio.

Houston Ballet’s Education and Outreach Program has reached over 25,000 Houston area students (as of the 2012-2013 season). Houston Ballet’s Academy has 950 students and has had four academy students win prizes at the prestigious international ballet competition the Prix de Lausanne, with one student winning the overall competition in 2010. For more information on Houston Ballet visit www.houstonballet.org.

All performances listed here are in Wortham Theater Center.

Houston Ballet launches its 44 works by emerging and established choreographers. Christopher Bruce, associate choreographer since 1989, will set his stunning work Intimate Pages. Canadian James Kudelka, whom The New York Times has described as “the most imaginative voice to come out of ballet in the last decade,” returns to Houston to stage his second commissioned work. Garrett Smith and Melissa Hough got their starts as dance makers at Houston Ballet, and went on to win prestigious awards from the New York Choreographic Institute.