By Fabio Bardelli on 3/14/13 • Categorized as Classical music,Music CD's 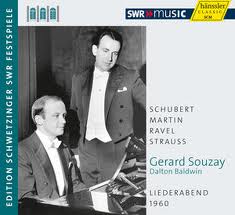 French baritone Gerard Souzay was born in Angers in 1918 and died in Antibes in 2004, after a long career that brought him to be considered one of the most reliable singers above all in French repertory, even if he sang also works of different authors and different musical fields
. He was a man of great learning, a composer, a painter, but especially an eminent chamber singer, a refined Lieder singer, and devoted himself also to contemporary music.

Listening today to this Liederabend of Schwetzinger Festival in 1960, we can make some considerations, and above all about his repertory. Souzay preferred the French one (he was also an opera singer, so he sung even works by Mozart, Massenet, Gounod, Debussy and Berlioz, but only occasionally and not in a continuous way), that is represented on this CD by Ravel‘s works

. We have also a demonstration of his interest for 20th Century music with works of a Swiss composer, Frank Martin, then some Schubert’s Lieder and some intimate chamber works by Richard Strauss.

First of all Souzay‘s great elegance in his approach to the music strike us, this is a characteristic that derives certainly from his studies in a French field. His quite transalpine refinement, his rather soft way to approach even the most disturbed musical pages, and his never superficial but intense and sometimes even disturbying lyricism get the upper hand

direct therapies for ED to address psychological reactions toThe rational selection of therapy for patients is only viagra pill.

. I don’t say so in a negative sense, I think that it is a way to approach the score pointing out some musical characteristics, that is even a personal interpretation.

It’s quite useless to note Souzay‘s exceptional elegance approaching Franz Schubert‘s music (the third Lied of this CD, Seligkeit D 433, shows deep introspection and wonderful elegance), or his extrahordinary capacity to enter into Ravel‘s music, with a really French spirit. Deux mélodies hébraiques are really beautiful, they are pages very evocative sung in an irreproachable way by Gerard Souzay
. The french bariton is quite at ease also in Frank Martin‘ music, the Sechs Monologe from “Jedermann” that we find in this CD.

Gerard Souzay, in a very intelligent way, is able also to hide his vocal limits (some not very sustained notes) to an expressive purpose, even if in some moments a little tiresome “vibrato” is rather obvious. His very exclusive and probably too much detached approach can seem sometimes even foreseeable, but his great vocal intelligence and sensivity as an interpreter let us forget it.

Pianist Dalton Baldwin is a very sensitive accompanist, sometimes even too much aside.

Good the techical level of CD, booklet rather poor without texts.