GOLD VIRTUOSO AT THE FRENCH COURT by PIERRE GOUTHIÈRE 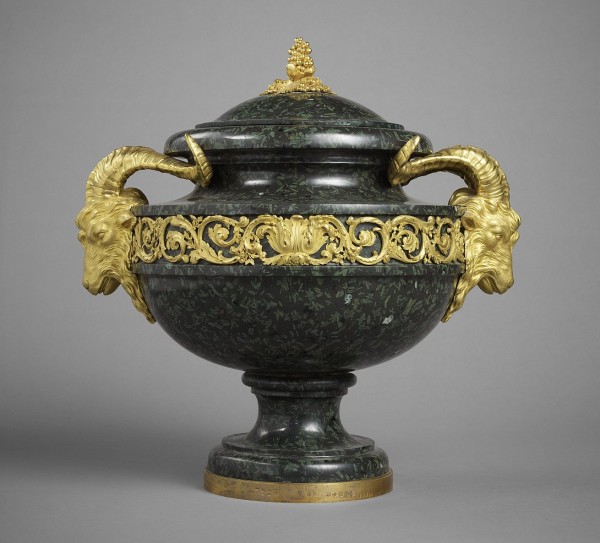 Casket, by Pierre Gouthière after a drawing by François-Joseph Bélanger, circa 1775-1780
Green Greek porphyry and gilt bronze © Musée du Louvre

PARIS/FRANCE: The Musée des Arts Décoratifs is featuring the work of one of the most famous artisans of the 18th century, Pierre Gouthière (1732-1813), bronze chaser and gilder to Louis XV and Louis XVI. 104 objects and 85 drawings and prints situate Gouthière’s creations in the context of decorative art in the last third of the 18thcentury. And as always at Musée Arts Décoratif the quality of its expositions are extraordinary good.

A joint venture with the Frick Collection and an augmented version of the exhibition in New York, this exhibition reassesses Gouthière’s work and career, the often overly generous attributions made to him, and the role played by major clients such as the Duke of Aumont.

The Paris exhibition also compares his work to that of his competitors, highlighting the close ties between bronze chasers and gilders, architects and ornamental sculptors and their role in the evolution of interior decorations.

Pierre Gouthière’s masterfully chased and gilt bronze ornaments were conceived as embellishments for the luxurious objects produced by the marchands merciers, or as elements of interior decoration in their own right such as clocks, ewers, vases, potpourris, caskets, wall lamps, chandeliers, tables, firedogs, fireplaces, columns and pedestals. 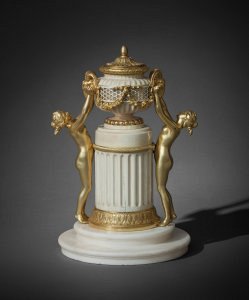 We know little about Pierre Gouthière’s early career, except that he served his apprenticeship with the master gilder François Ceriset and had the privilege of working with renowned silversmiths very early on: François-Thomas Germain, silversmith to the king, taught him the techniques of gilding and chasing gold and silver.

During this period, Gouthière mastered the successive stages in the production of objects in gilt brass and the particularly complex techniques of chasing and gilding. Producing such objects required the specialised skills of different artisans (draughtsman or architect, sculptor, modeller, founder, turner, chaser and gilder) and involved the creation of models, the welding together of elements cast separately, the chemical manipulations of gilding and the final assembly of component ornaments.

It was during his training that he perfected the matt gilding technique for which he became famous. This very expensive process enabled him to vary the brilliance of an object’s surface.

Gouthière worked with the greatest ornamental sculptors, sculptors and architects such as François-Joseph Bélanger, Claude-Nicolas Ledoux and Pierre-Adrien Pâris, several of whose drawings, in the Musée des Arts Décoratifs collection and other national and private collections, are being shown for the first time alongside Gouthière’s works

These drawings were a vital stage in the creative process. They show the extraordinary inventiveness of the ornamental sculptors of the period and how they created a repertoire of forms and ornaments which Gouthière and his contemporaries drew on abundantly to create bras de lumière, firedogs, fireplaces, mantel vases and door handles. 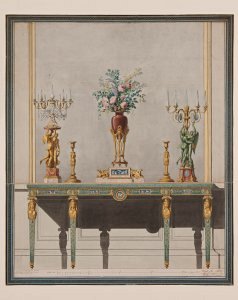 Pierre Gouthière produced extravagantly luxurious objects, almost exclusively for a powerful and immensely wealthy clientele and for the court. In 1770, the architect Ledoux chose him to produce the bronze furnishings he had designed for the music pavilion he was building for the Comtesse Du Barry at Louveciennes.

From 1772 to 1777, he worked on the decoration of one of her drawing rooms at the Château de Fontainebleau, where he also created pieces for Marie-Antoinette’s Turkish boudoir.

During this period he also produced bronzes for the Duchesse de Mazarin’s Paris mansion, including an extraordinary pair of bras de lumière. Working with the architect Bélanger, who built and supervised the decoration of the Château de Bagatelle, Gouthière also worked for Louis XVI’s brother, the Comte d’Artois.

Gouthière owed much to his most famous client, the Duc d’Aumont, gentilhomme de la chambre du roi (first gentleman of the bedchamber) and controller of the Menus Plaisirs (“lesser pleasures of the king”), who commissioned Gouthière to create the bronzes for the Queen’s jewellery cabinet.

Gouthière produced many of his most exceptional pieces for the Duc d’Aumont. A great admirer of hardstones and Asian porcelain, Aumont commissioned Gouthière to create gilt bronze mounts from Bélanger’s drawings for the pieces he collected in his mansion, now the Hôtel Crillon on Place de la Concorde. Some fifteen of these pieces, dispersed at the auction after the duke’s death in 1782, are being brought together for this exhibition. 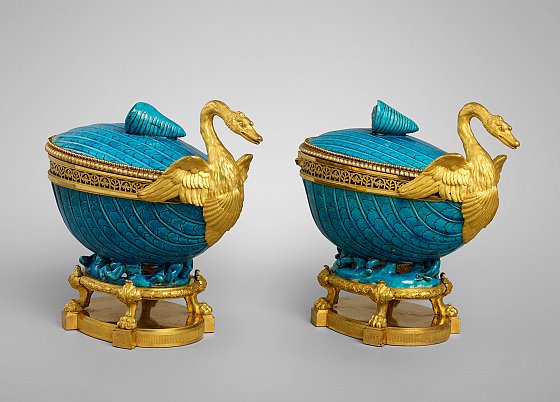 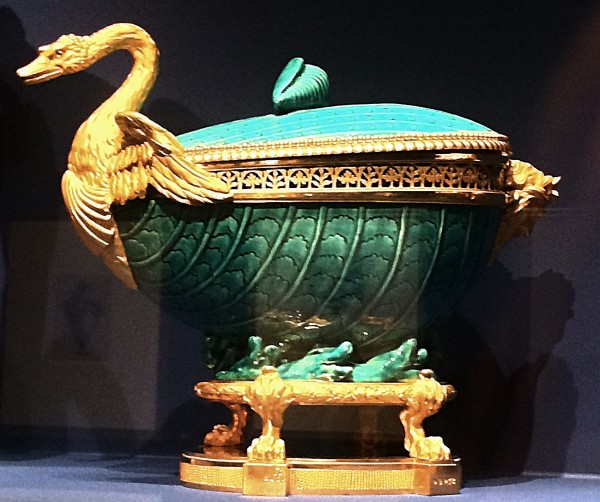 Details Watch the crocodiles under the body, Foto Henning Høholt

Although there is no “Gouthière style” strictly speaking, he had his own very personal way of interpreting a model. As often when artists rarely sign their works, pieces by his contemporaries have been attributed to him and a number of his own pieces have been attributed to his competitors. The exhibition also highlights the work of several Parisian metalworkers – Forestier, Rémond, Feuchère and Thomire – each of whom, in their own way, excelled in chasing bronze and the use of matt gilding. 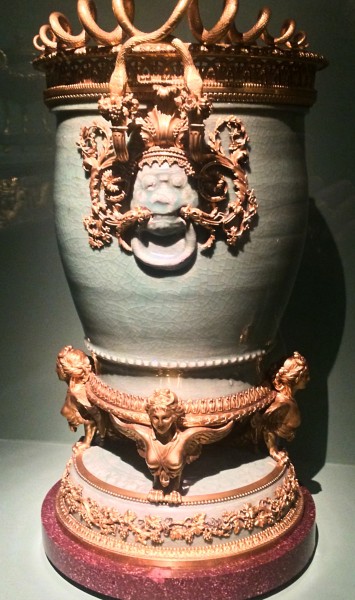 Although he worked less after the French Revolution, Pierre Gouthière’s fame endured until he died in 1813 and throughout the 19th century, when his works continued to be highly prized by mainly French and English collectors. This exhibition brings together works by him from the Musée du Louvre and the Château de Versailles, the Wallace Collection in London, the Frick Collection in New York and several private collections.