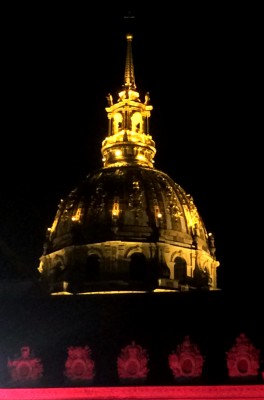 PARIS/FRANCE: The famouse opera company “Opera en plen air” every year tours between famouse outdoor resorts, – many castles, in France during the summer season. Presenting famouse operas, staged by wellknown regisseurs, with well established conductors, who knows their field, and with very good soloists, choire and large orchestras
. In this case 45 musicians. This year La Boheme by Giacomo Puccini.

As a touring production, who shall fit in to many different places, the production team had a limit. In the scenography for La Boheme they have managed to reach a good solution. It function well, and the large orchestra is in the middle as in a box, and are “nearly” invisible, but are also giving the musicaly basic, so with a good sound technically team, it sounds very well, even when the tenors microphone,  accidentially looses his microphone, he manage to get his voice out the audience, until that is being fixed, however, it disturbed the good singer. 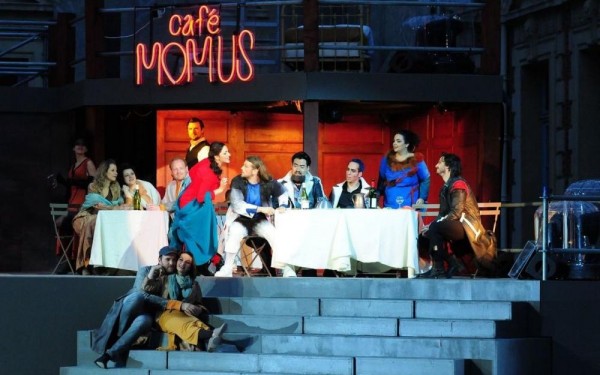 Marco Frusoni was singing Rudolph, his first aria “Che gelada marina” was excellent, and he followed well up his soprano, unfortunately, I had the feeling that his voice was not in the best shape all the time, so the musically technician team, who did a very good job all the evening, often let Mimis voice be the dominant in their duets. His famouse duet with Marcel in the last act was beautiful sung. He should work with his famouse ending words – it is Mimi Mimi. Not Miimi Miimi, then he spoils the composers musically idea.

Olivia Doray was a good Musette, filled the large stage with her presence, and sound.

Jiwon Song, as Marcel, was the hit of this cast, his beautiful very well sounding baryton was filling up the whole room with an extraordinary sound, it was a whole pleasure all the evening,

Benjamin Mayenobe sung well Schaunard. Boris Kyung-Il Ko Coline filled also his role well. His famouse goodbye aria to his coat, was too slowly to my opinion, it lost some because of this too slow tempo.

Mathieu Toulouse did a god job in the double role as Benoit and Alcindoro. As Benoit we got all the important details in his clear text, and the regi has added a small elegant detail, by letting his wife waiting for him and arguing with him before and after. Well made. As Alcindor, i missed the important detail that he get´s all the bills for the Bohemes for the evening, this the Regi could have made more clear.

The on stage “Orchestra” which ends the second act, could have had a drum and instruments, so it was looking like they did play

. The little boy who wanted the trumpet from his mother was great,

To let Parpignol – Oliver Monitory run around unmotivated on stage in all acts, was disturbing and  did´t help the production any thing. It seems to be a “register idea” – who was afraid, that the good history and wonderful music can´t survive alone.

Soloists at the Applause, in front some of the large orchestra. Foto Tomas Bagackas

Patrick Souillot conducted the production and had all the good tempi and feeling in his fully hand, and his orchestra sounded wonderful, well helped by the musically technician team, who managed to fill up the whole room with beautiful sound, and even managed to let us get pianissimo, when it shall be pianissimo. He had several good soloists in his orchestra and we enjoyed th concertmaster, Anne Gravoin´s many beautiful solo parts.

Jacquis Attali has made the reggie, and it functioned well
. He managed to do the large scene functioning good, even, that from very far away seats, it might have been difficult to get all details specially in the first and second act. To collect it all in the fourth act down to the center was a good decission.

Enki Bilal has managed to make a working scenography for such a touring production, it worked well. Unfortunately, the costumes was not a success for any of the persons on stage, specially the leading team. This could have been done better. I still dont know what style periode he has tried to put it to.

The beautiful yard of l´Hotel des Invalides was functioning very well for an outdoor, and we were pleased to notice that it was nearly fully huse, which, could be around 1800 persons in the audience. 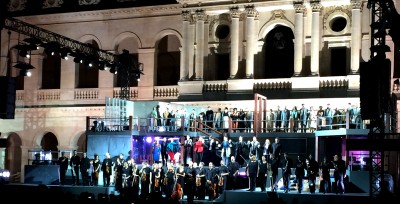 Looking forward to next years Opera in plen air.