By Henning Høholt on 5/21/13 • Categorized as Classical music 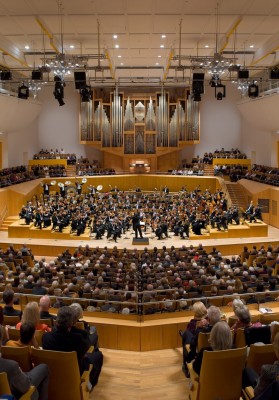 With 407 young conductors applying to compete, more entries have been received for next year’s contest than in the first three competitions in 2004, 2007 and 2010
.
In an intensive selection process 12 participants were chosen and have been invited to come to Bamberg for the Competition.

The applicants (54 were women) come from 60 different countries.

The selected candidates, all under the age of 35, are (in alphabetical order):

Starting on 7 June 2013, the candidates of the 4th International Gustav Mahler-Conducting Competitionwill have to convince the jury in four rounds to win one of four prizes. Prizes will be awarded during the final concert on 14 June 2013. From the semi-finals on (12 June) the competition is open to the interested public.
The jury includes Marina Mahler (Honorary Jury Member and Patronesse of the Competition), Jonathan Nott (Principal Conductor of the Bamberg Symphony Orchestra and President of the Jury), the conductor John Carewe, Louwrens Langevoort (Director of the Cologne Philharmonie, Head of ACHT BRÜCKEN Musik für Köln and Managing Director of KölnMusik GmbH), Jonathan Mills ,(Director of the Edinburgh International Festival and composer), Albert Schmitt (Managing Director of Die Deutsche Kammerphilharmonie Bremen), Markus Stenz (General Music Director of the City of Cologne and Gürzenich-Kapellmeister as well as Principal Guest Conductor of the Hallé Orchestra and Principal Conductor of the Netherlands Radio Philharmonic Orchestra), the composer Rolf Wallin, Wolfgang Fink (Managing Director of the Bamberg Symphony Orchestra – Bavarian State Philharmonic) and Christian Dibbern (member of the Orchestral Board of the Bamberg Symphony Orchestra).

In the spirit of Gustav Mahler, the Competition’s set repertoire ranges across the great symphonic tradition, the classics of modern music and the contemporary avant-garde.

Grading of viagra online • “How is your current relationship with your partner?.

More than 1200 young musicians have applied to enter the Gustav Mahler Conducting Competition since it was first held in 2004. During that time, it has set new standards for competition repertoire and musicianship and has become one of the world’s leading events of its kind. It offers all its highly talented young participants, irrespective of their final placing, a valuable public platform, vital career momentum and great growth opportunities. Gustavo Dudamel, winner in 2004, was launched on his global career, while Łukasz Borowicz, winner of that Competition’s Special Prize, has for several years been Chief Conductor of the Polish Radio Symphony Orchestra in Warsaw
. Ainārs Rubiėis, winner in 2010, made his debut at the Salzburg Festival in 2011 as winner of the “Nestlé and Salzburg Festival Young Conductors Award” and is currently Music Director of Novosibirsk Opera. Yordan Kamdzhalov, winner of the 3rd prize in 2010, was appointed General Music Director in Heidelberg the following year and has performed with the London Philharmonic Orchestra and Deutsches Symphonie-Orchester Berlin, while Aziz Shokhakimov, 2nd prize-winner, made his debut in 2011 with the Dresden Staatskapelle and other orchestras.

The Gustav Mahler Conducting Competition will be generously supported by the Association of Friends of the Bamberg Symphony Orchestra, the automotive supplier Brose Fahrzeugteile GmbH & Co. KG in Hallstadt, and the Foundation for Upper Franconia in Bayreuth.