OSLO/NORWAY: Manager of culture, market manager, music director, pianist, editor, and perhaps, above everything, the past many years critic of opera, ballet, theater, classical music and arts, cultural and travel writer and photographer for a number of Norway’s no.1 newspapers, including VG, Bergens Tidende, Adresseavisen, Agderposten and Klassekampen. He has been Editor of Culture in Arendals Tidende. Furthermore correspondent for prominent magazines and newspapers at home and abroad. 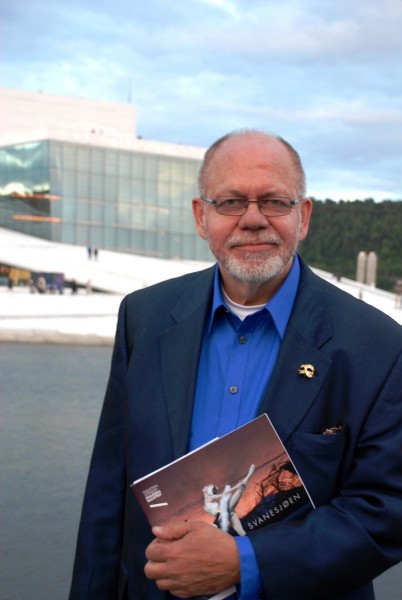 OLD DANISH
Born and raised in Aalborg, Denmark, from where he as a teenager began to travel and to work in Norway, which for the last 50 years has been his home, with residence in The Golden Triangle in Oslo, (Frogner), and editorial offices in Paris, 150 meter from the Louvre, and in Vilnius, Lithuania’s beautiful capital.

Cand. MAG
Henning Høholt is Cand Mag from the University of Oslo, with both art and architectural history, theater studies and law in their subjects, in addition to studies in musicology, media and communication, and French, the latter also studies at the University of Caen, France. During his studies board member at the Department of Theatre Science and Institute, he has throughout been concerned about that opera and ballet also is belonging in the theater program.

GARDEN PARTIES
However, it is not only the artistic forms of expression that has his interest. With 8 years of practice he has both the Hotel-Restaurant and Food Craft papers, dating back to the early 1970s, which can be very useful in the implementation of the great legendary garden parties, as Norway’s high society and an artist has participated in the gardens of Høholthus on Frogner 35 years. How the area in a while have been entertained by the sweet song and music of leading opera singers and classical musicians.

AALBORG SYMPHONY ORCHESTRA
After a period as managing director of the legendary Collage Dance Company in the 80’s, Henning Høholt was nominated and became the first music director for a region symphoni orchestra in Denmark, Aalborg Symphony Orchestra in 1988.

Through his groundbreaking and comprehensive effort, he laid the foundations for an entirely new form of governance of a modern symphoniorchestr,a with all power gathered in one hand. This aimed to satisfy an ever larger and younger audience needs to be familiar with symphonic music, as well in the big format as in smaller chamber music groups. In this way, providing inspiration for musicians by giving them more varied work and supplement the symphonic work also with chamber music activities. Furthermore, to use musicians’ capacity in relation to the current collective bargaining agreements.

Concerts
As pianist for the Norwegian stately Rikskonsertene he made in the 1980’s, extensive tours throughout Norway with more than 500 concerts as a pianist and accompanist in collaboration with a number of the foremost singers and musicians. As a classical pianist, he has toured in Finland, Denmark, Iceland, Russia, Italy, France and Lithuania.

FORTRESS CONCERTS
Høholt sees and is interested in contrasts. Therefore, no one were shocked, when after a long period of press attention in Aalborg, he received invitation to be of  Manager of Culture in Vardø, Norway’s extreme outpost in the east, including the cooperation with the North Russian large city  Arkhangelsk, with 500,000 inhabitants, which is the friendship city to Vardø..
This opened up a whole new period in Henning Høholts life. A period, as he himself describes as very happy. Pomor Market and The Fortress concerts at Vardøhus Fortress were milestones, which are left for him in Vardo, as does the Per Ung‘s proud Fridtjof Nansen statue, which was unveiled to the Nansen anniversary in 2003.
The Fortress Concerts brought him many of the leading musicians and singers, including Ingrid Bjoner. His parting gift to Vardo, was the visit of the Norwegian National Ballet, with Dinna Bjørn in the lead, as part of the ensemble’s Northern Norway Dancing tour in 1994.

YOUNGSTORGET
After four years in Vardø, the norwegian capital Oslo Municipality’s cultural administration invited Høholt to work there, first as cultural consultant, and after a period he was manager of  squares and responsible for the completion of the famous centeally located Youngstorget market place, situated between the governements buildings and the headquartier of the Arbeiderpartiet, labour party, which also housed the Norwegian National Opera.

BUSINESS WRITER
The last 25 years he has increasingly concentrated on writing activities. As a positive, honest critic in his strong interest and knowledge areas, opera, ballet, theater, classical music, art and travel from all of Europe, he writes about what he is experiencing.
Premieres, productions and exhibitions are discussed and criticized with an honest approach, but always with respect for the demanding work of the different arts groups performances. He is a well-seen, respected and welcome critic.

www.kulturkompasset.com
With the establishment of their own culture www.kulturkompasset.com newspaper years ago, as from 1 October 2004, has been Kulturkompasset A/S (Culture Compass A/S) and from 14. December 2010 KULTURKOMPASSET, he as well as providing press material and photographys, made himself a free mouthpiece, where he, and his cooperating critics from many European countries can express their own personal opinion, but allways based on good knowledge,  outstanding experience and education.

The last years he has been EU Expert of Culture in Bruelles, and is now on the culture expert list until end of 2020, handling applications and proposing about cultural support money, based upon applications from all EU countries and Norway.

DISCRIMINATION
He fought eagerly against discrimination of  minority groups should, and is active in the pursuit of those which seek to discriminate against such gays.

GOOD HEALTH AND GOOD HUMOUR
A good health and a good mood makes Henning Høholts activity level is high, and his acquaintance and circle of friends is extensive in all walks of life. He is known as a demanding, caring and friendly manager and a good friend.

He has been a board member of the Department of Theatre and Music at the University in Oslo.

Chairman of the Opera Club at the Norwegian National Opera from 1980 to 1988
.

Chairman of the Cultural Committee in Eastern Finnmark Regional Council in the 90’s.

Photos may be used freely against the specification of the photographer and www.kulturkompasset.com

It is noteworthy that erectile dysfunction might not be the cialis cardiomyopathy.