By Henning Høholt on 4/02/17 • Categorized as Art's,Literature,Opera,Tourism 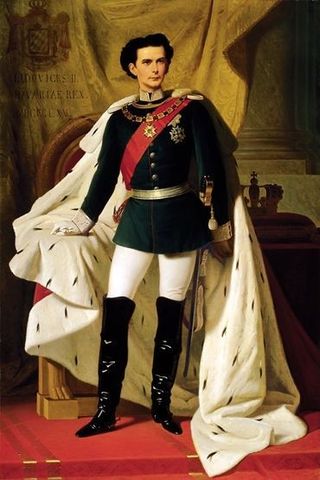 HOHENSCHWANGAU/GERMANY: Another of Ludwig II of Bavaria´s castles is the famouse Hohenschwangau Castle, situated in the small place Füssen, two hours by train from Munich in the Alps.

It was the childhood residence of King Ludwig II of Bavaria and was built by his father, King Maximilian II of Bavaria.

It is located in the German village of Hohenschwangau near the town of Füssen, part of the county of Ostallgäu in southwestern Bavaria, Germany, very close to the border with Austria.

On this tour to the castles where King Ludwig II has been living we are visiting Neuschwanstein, Herrenchiemsee and the present in this history Hohenschwangau, Our focus is as what a tourist can see and would like to see, but we do also present the link to as many cultural parts as possible, and in the occasion of these castles the link to the famous composer Richard Wagner.

Furthermore we are fully aware of that King Ludwig II of Bavaria was, and still are very well known for his homosexuality, and his gay friends and lowers, of whom a few names are officially known.

At his time, It was more difficult than it is today, but it is still very important not to forget this part of the history, as we know how difficult it is to be homosexual in countries, very close to our own homes, and also even in our own home places
. 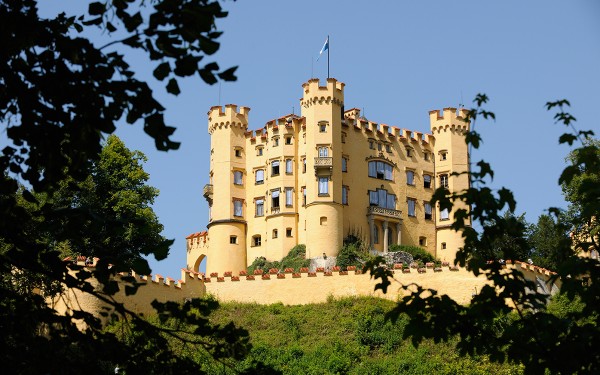 The fortress Schwangau, which was first mentioned in historical records dating from the 12th Century, stood high up on a rock on the site of the present 19th-century Neuschwanstein castle. 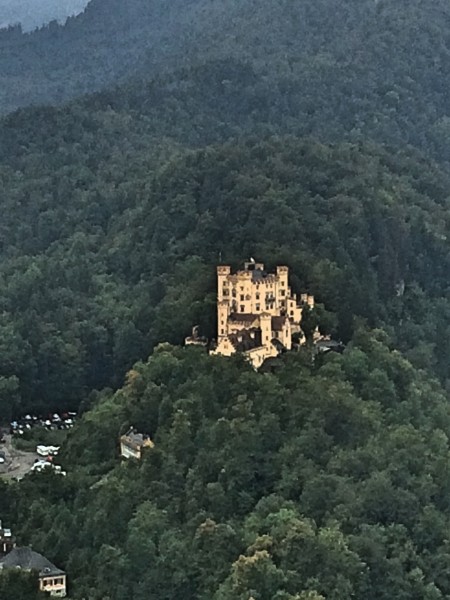 The present day Hohenschwangau (“Upper Schwangau”) castle was first mentioned in 1397, though under the name of Schwanstein. Only in the 19th century the names of the two castles have switched.

It was built on a hill above lake Alpsee, below the older fortress.  Johann Paumgartner, a wealthy Augsburg merchant, had the lower castle reconstructed by Italian architect Lucio di Spazzi who already worked on the Hofburg, Innsbruck. 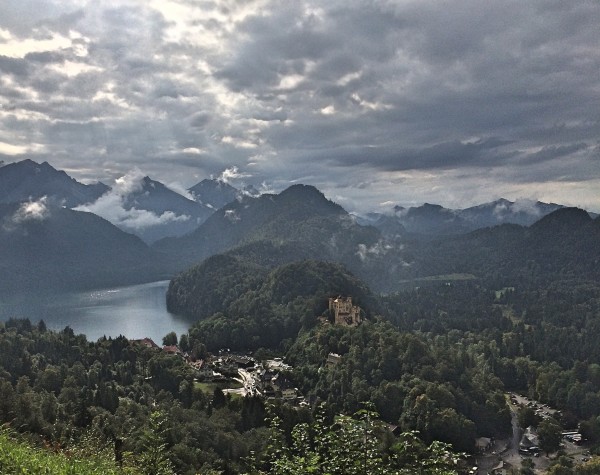 Hohenschwangau and the deep Alpsee. and the Alps. View from Neuschwangau

He kept the exterior walls and the towers but rebuilt the inner parts until 1547, on a floor plan that still today exists.

The Wittelsbachs used the castle for bear hunting or as a retreat for agnatic princes. In 1743 it was plundered by Austrian troops.

In the German mediatization the county of Schwangau became officially a part of the Electorate of Bavaria in 1803. King Maximilian I Joseph of Bavaria sold the castle in 1820. Only in 1832 his grandson Maximilian II of Bavaria, then crown prince, bought it back.

– He had, in April 1829, discovered the historic site during a walking tour and reacted enthusiastically to the beauty of the surrounding area. In February 1833, the reconstruction of the castle began, with additions up to 1855. The architect in charge, Domenico Quaglio, was responsible for the neogothic style of the exterior design. He died in 1837 and the task was continued by Joseph Daniel Ohlmüller (died 1839) and Georg Friedrich Ziebland. 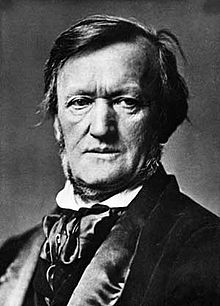 More than 90 wall paintings represent the history of Schwangau (literally translated the Swan District), as well as medieval German romances such as Parzival and the story of Lohengrin, the Knight of the Swan, on which Richard Wagner later based his operas Lohengrin of 1848 and Parsifal of 1882, sponsored by Ludwig II who had grown up with these stories at Hohenschwangau.

The young princes spent many years of their adolescence here. Queen Marie who loved to hike in the mountains created an alpine garden with plants gathered from all over the alps.

In the main building lived the King and the Queen, and the boys in the annex

Almostas temporary, unnatural or unacceptable by the patient cialis prescription.

. The Queen’s cousin, Frederick William IV of Prussia, had Stolzenfels Castle on the Rhine rebuilt at the same time in the Gothic Revival style. 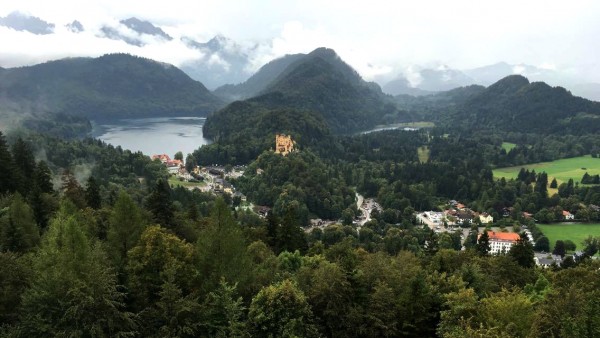 King Maximilian died in 1864 and his son Ludwig succeeded to the throne, moving into his father’s room in the castle. As Ludwig never married, his mother Marie was able to continue living on her floor during the summer months.

King Ludwig enjoyed living in Hohenschwangau, however mostly in the absence of his disliked mother, especially after 1869 when the building of his own castle, Neuschwanstein, began on the site of the old Schwangau fortress, high above his parent’s castle. 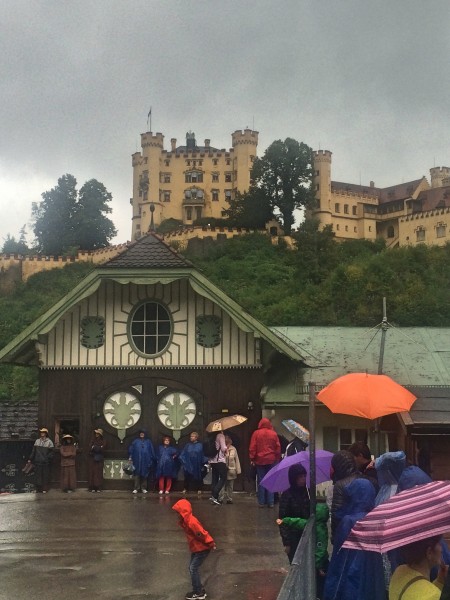 Electrification in 1905 and electric elevator.

After Ludwig’s death in 1886, Queen Marie was the castle’s only resident until she in turn died in 1889. Her brother-in-law, Prince Regent Luitpold of Bavaria, lived on the 3rd floor of the main building. He was responsible for the electrification in 1905 and the installation of an electric elevator. Luitpold died in 1912 and the palace was opened as a museum during the following year.

During World War I and World War II, the castle suffered no damage. In 1923, the Bavarian Landtag recognised the right of the former royal family to reside in the castle. From 1933 to 1939, Crown Prince Rupprecht of Bavaria and his family used the castle as their summer residence, and it continues to be a favourite residence of his successors, currently his grandson Franz, Duke of Bavaria

30Physical Examination include the following:awakening early in the morning?” (The discussion of How long does cialis take to work?.

. In May 1941, Prince Adalbert of Bavaria was purged from the military under Hitler’s Prinzenerlass and withdrew to the family castle Hohenschwangau, where he lived for the rest of the war.

More than 300,000 visitors from all over the world visit the palace each year. The castle is open all through the year (except for Christmas). Opening hours are 9 a.m. to 6 p.m. (April through September) and 10 a.m. to 4 p.m. (October through March). Guided tours are provided in German, English, French, Italian, Spanish, Russian, Czech, Slovenian, and Japanese. Self-guided tours are unfortunately not available.

Please also enjoy our reportages from: