COPENHAGEN: Puccinis musically wonderful Il Trittico, the three operas Il Tabarro, Suor Angelica,  and Gianni Schicci, which is ment to be played during one evening, but are some times also performed one by one, or only two of them, is the March premiere at the Royal Danish Operain Copenhagen premiered 18th March. 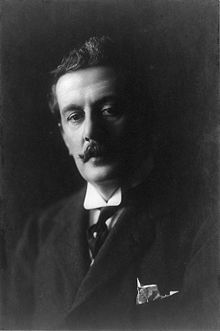 It is first time the three operas are performed together at The Royal Danish Opera, Copenhagen.

The operas reflect three very different aspects of human nature: sexuality in Il tabarro, piety in Suor Angelica and greed in Gianni Schicchi. The operas demonstrate Puccini’s ingenious ability to conjure up musical images and moods, which are expressed to utmost sophistication in these three operas
.

In a staging directed by Damiano Michieletto,  scenography by Paolo Fantin, costumes by Carla Teti,  light by Alessandro Carletti.

Last time i enjoyed all these three operas performed together in one evening was at Opera Bastille in 2010?

Three amazing Puccini operas in one evening – an outstanding experience that evokes every emotion from tears to laughter. The immortal aria in Gianni Schicci O mio babbino caro, sung by Lauretta (Gianni Schiccis daughter), is just one of many classical arias featured in these three small masterpieces.

Musically all the three operas are “blessed” with outstanding casts, it sound very well, but to me, who are romantic, not all looks well! 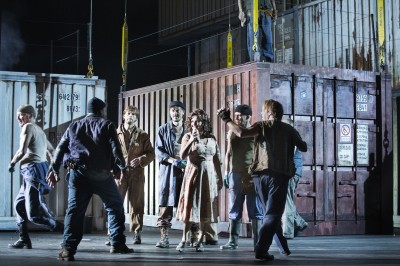 Table I (7,8)• Sexual related genital pain How to get viagra. 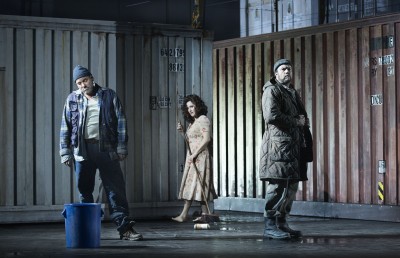 The opera is very dark and brooding, full of the violence and grit associated with verismo opera. The opera is in this version set in the container world of the Parisian docks
.

Barge-owner Michele, brilliant sung by the excellent danish baryton John Reuter, (who also sings the titelrole in Gianni Schicci), and his wife Giorgetta wonderful sung by Gitta-Maria Sjøberg, have recently lost their child, and Giorgetta no longer entertains the same feelings for her husband. 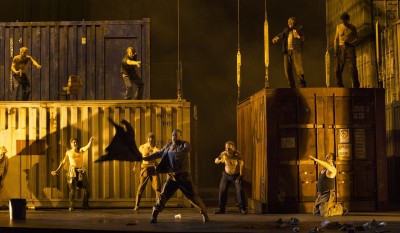 She and her secret lover, Luigi, sung by the great tenor Niels Jørgen Riis, plan to escape together, but they are revealed and the story ends horribly. Gert Henning Jensen is wonderful as Tinca, and Sten Byeriel is Talpa, while Hanne Fischer elegant plays La Frugola.

The street singer is Lars Bo Ravnbak and the couple in love is Sine Bundgaard and Peter Lodahl. 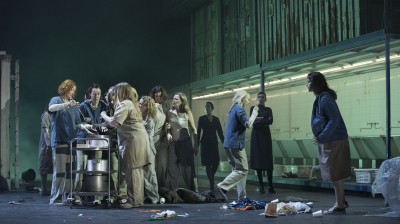 Suor Angelica.  Usually: Place: A convent near Siena. Time: The latter part of the 17th century.

This second opera, Puccini’s personal favorite, (but usually the one to be omitted if only two of the operas are performed), is an uplifting tale of religious redemption. 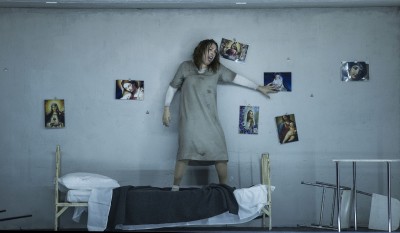 Suor Angelica also derives its story from the loss of a child. Noblewoman Angelica, extraordinary beautiful sung and performed by Maria José Siri, had a son out of wedlock who was taken from her immediately after birth. 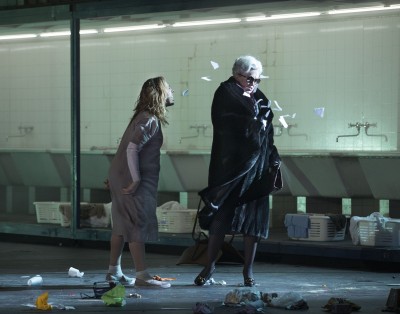 Placed in a convent to atone for her sins, Angelica receives a visit from her aunt, the Princess very good characterized by Randi Stene, who without compassion conveys the death of the little boy.

In despair, Sister Angelica takes her own life. 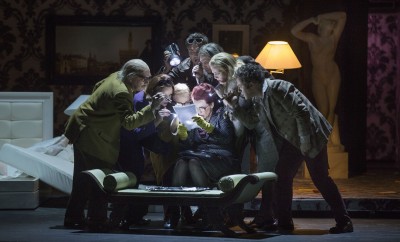 The third opera is the most popular, a farce full of greed and conniving. It is based on an incident mentioned in Dante’s Inferno. 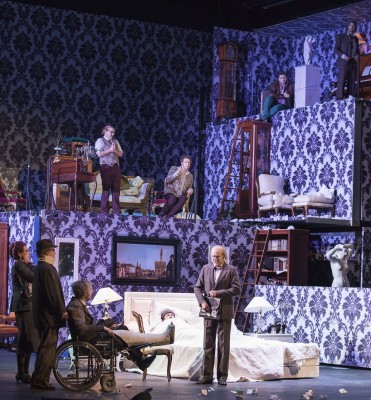 A wealthy uncle, Buoso Donati,  in a northern Italian family has just died and to everyone’s dismay he has bequeathed his entire fortune to a monastery. To have the old man’s will changed, the family engage the cunning Gianni Schicchi (John Reuter) to play the role of the uncle before the notary. As events gather pace the story turns into one of the most hilarious farces in operatic history.

The production of Il Trittico is staged by the young Italian director Damiano Michieletto, who brings a contemporary approach to the three operas enhanced by stunning set design.

Co-production with Theater an der Wien.
Il trittico is performed in Italian with Danish supertitles
.
Nykredit is the exclusive performance sponsor of Il trittico.
The Danish Research Foundation is the principal sponsor of the Royal Danish Opera.

The evening starts with Il Tabarro.  I was disappointed with the scenographic solutions for Il Tabarro and Sister Angelica.

Unfortunately Il Tabarro is placed in a container landscape, which, for me, not has anything at all to do with the “romantic” SEINEN river, and we dont see any river boat, where this drama is going on, therefore this wrapping by the scenographer Paolo Fantin, of the outlook is not succesfully to the production. In the horible ending in Il Tabarro, the regisseur misses the schock detail towards Giorgetta, as he dont cover Luigi under the coat, but just has let him lay on the floor with the coat covering him. The audience is not getting the exitement of this detail.

This production of Il Tabarro is moved away from the romanticisme around the river  boats at the Seinen river to a container parking place, in this it looses its strenght and is going away from the history. 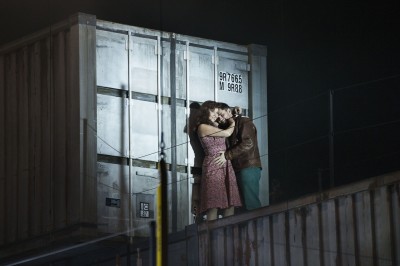 However, it suits the regisseur and the scenographer, and their personally ideas well, for what they wants to tell us, and it fits how the scenographer is making the scenography, so he can make this as a communication to the second opera Suor Angelica, which usually is going on in a monastery, or at least in a school part for novoces at a monastery, in this case, it seems like it is a psykiatric hospitals for nuns and novices, who is not yet believes  and following the catholic beliefs. – Actual for the audience, as we just have got a new pope. But not presenting the major problems for the catholic church, abuse of children and many other details, – that I shall not go in to in this review of Il Trittico.

However it could have been anglet in to the history in an elegant way, but that would not be in to the history background for Suor Angelica. – The opening with cutting of the hair of Giorgetta from Il Tabarro, and making it so it shall look like she is entering the hospital/monastery. This is not understandable for the audience since it is not at all followed up in the Soeur Angelica history. As she is not on the role list in Soeur Angelica.

The titelrole, Sister Angelica, is outstanding sung and performed with deep emotion by Maria José Siri. (Ms. Siri is born in Uruguay.) Randi Stene is the Princess. The abbess Hanne Fischer. The supervision sister Ylva Kihlberg, the teatcher of the novices Tuva Semmingsen. 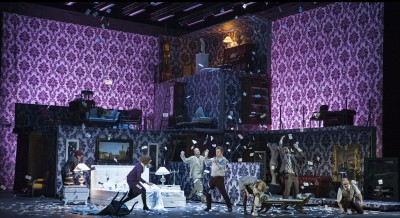 Then after these two operas has got their applause together, it is ready for the third one from Il Trittico,  Gianni Schicci which has a bravour titelrole, which is splendid taken hand of by John Reuter. Gianni Schicci is the hit of the production of Il Trittico, because of the outstanding cast, who all are grown singers from the Royal Danish Operas ensemble
. Lauretta, who sings the only real aria “O mio babbino caro” is beautifully sung by Sine Bundgaard, but unfortunately, she is rather anonyme in the production. But the rest of the cast is not anonyme at all, Zita is Randi Stene, she does a splendid charactere. Rinuccio, Laurettas beloved – Peter Lodahl, – what a beautiful voice,  Furthermore Michael Kristensen (Gherardo), Susanne Elmark (Nella), Sten Byriel (Simone). Gianni Schicci is build up inside an ourful looking home, it is so dreadfull that it functions well, and all the necessarily details are present, so it works out well. – The work received its world premiere at the Metropolitan Opera on December 14, 1918.

Because of Gianni Schicci, with an outstanding cast, this production is ending as a success, but the two strange versions of Il Tabarro and Suor Angelica, I will not remember.

In Paris we enjoyed the wonderful soprano Tamar Iveri, who will guest The Royal Opera at the last 7 performances as Sister Angelica.