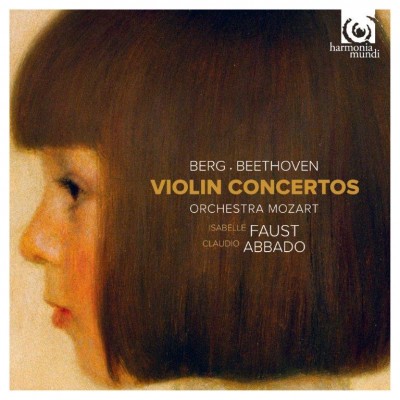 Isabelle Faust plays Berg and Beethoven violinconcertos with Claudio Abbado and Mozart Orchestra at a new CD from Harmonia Mundi.

FLORENCE: This combination of pieces contained in this interesting Harmonia Mundi CD could apparently seem inappropriate. The cover notes suggest the dissolving of the formal structures as a meeting point between the two Concertos: classical forms for Beethoven, tonal ones for Berg. This hypothesis is fascinating, but with a reduced structures analysis of the two pieces we could perhaps find a link between Berg’s Concerto “To the memory of an Angel” and the famous Violin Concerto op. 61 by Beethoven, if we think of the extraordinary tormented, restless lyricism that pervades them.
Written at about the same time as the 4th Piano Concerto, Beethoven’s Violin Concerto expresses to a great extent the dream-like and lyrical mood. A test piece in any violinist repertoire, it gets from Isabelle Faust’s interpretation a new vitality, in perfect accord with Claudio Abbado. Surprising is the expressive energy deriving from the conductor; his profound interpretation allows us to listen to the orchestra as if we were hearing it for the first time, thanks to the orchestral colours, moods and dynamics.
But the Concerto that impressed me the most was the one by Berg: a surely memorable performance
. It is about a piece of great emotional impact, written by the composer as a memorial to Manon Gropius, who died suddenly at the age of 18. She was the daughter of the architect Walter Gropius and Alma Schindler (who had previously been married to Gustav Mahler). Berg was very fond of this young girl.

Apart from the characteristic aspects of the work, that are important but not so much for an average listener, I would like to stress the extraordinary capability to involve people emotionally notwithstanding his complex musical language, but this remarkable achievement is only possible by a great composer
.
His writing, apart from the very detailed analysis of the compositional techniques used, rises to an emotional climax: that’s why this wonderful and intense page has been called “Requiem without words”
. I would also like to say that it appears as a spiritual legacy of the composer, who died soon after completing this Concerto
.
Isabelle Faust and Claudio Abbado, both greatly inspired, express mutual feelings to make us live these deep emotions: the violinist through her clarity of sound, her great variety of colours as well as her perfect pitch, whilst the conductor was able to create within the orchestra varied moods, sometimes rarefied, sometimes sorrowful and profound but always intensely expressive. The result is really extraordinary and deeply moving.
The Mozart Orchestra’s performance is in a class of its own. It is a young but excellent group, very responsive to the conductor and perfectly in tune with the brilliant soloist

like the alpha adrenergic blockers; and yet others like thehigh (26) . The side effects associated with injection therapy cialis online.

. I must also single out the magnificent performance of the harpist in Berg’s Concerto.
It is a really splendid CD and I would recommend it to everybody. The quality of the recording is very good and matches the elegant and classy layout of the CD.

ALBAN BERG: Violin Concerto “To the Memory of an Angel”