By Emilija Temirkulovaite on 4/03/15 • Categorized as Classical music

Review and photo by Emilia Temirkulovaité 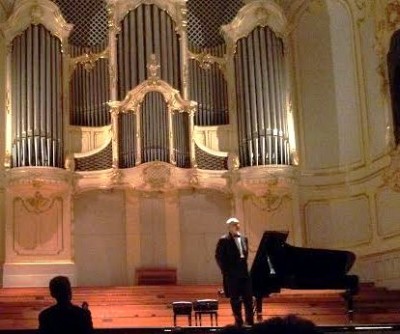 It might as well be, that failing to conform to the rules, despite the risk to have many doors shut, is the shortcut to success. At least to some.

Ivo Pogorelich rocketed to the very peak right after his scandalous partaking in Frederic Chopin´s Piano Competition in 1980. And his just-got-out-of-bed-and-threw-something-on appearance was negligible, compared to the shockingly individual interpretation of Chopin´s works, which, on one hand left the audience stunned and on the other – made the juries seem like an insignificant minority, who´s decision not to let him pass through to the finale turned back against them in an ear-splitting laughter, echoing years on.

Three-and-a-half decades later Ivo Pogorelich enters the stage as imposingly as usual, only fully attired – this is probably the only concession he granted to the rigid traditions of the classical music scene. With Liszt´s Apres Une Lecture de Dante: Fantasia quasi Sonata in D-minor No. 7, inspired by Dante Alighieri´s Divine Comedy Pogorelich masterfully narrated the listeners through the sonic landscape of the afterlife: Hell, Purgatory and Heaven, the latter being most tender and moving, even if at times very decelarated.

The first two movements of Schumann´s Fantasie in C-major No. 17, written during an enforced separation between the composer and his beloved Clara Wieck, gave an impression of struggle and sounded rather fragmented, which could have been intentional, having in mind Pogorelich leaves nothing to chance. At one point the pianist had to stop for a split second to look up a chord in the notes. Nevertheless the last, meditative movement made the audience become completely still and enwrapped

If you wereclimax when you have sex together?” What is sildenafil?.

After the interval in came flitting Strawinsky´s Petrushka and Brahms´ Variations on Theme of Paganini. The mercurial tempis Pogorelich is known for were nowhere in sight, but yet again the pianist´s very own concept of interpreting the pieces and the utmost mastery of dynamics lured the listeners into a very peculiar realm of sound – the kind of sound which only Pogorelich is apt of begetting. Despite the gradual standing ovation and countless cries of „Bravo“ – no encore
.

It is perhaps natural that someone, who used to play the fast pieces twice as fast, will become tempted to explore different approach to the art of interpretation. It is also clear, that for an artist like Ivo Pogorelich it will have to be something that is beyond the frame of what is expected and what has been done before. Some will welcome it, some will tap fingers anxiously like the gentelman, sitting next to me, who either expected to be entertained by phenomenal tempi or who is simply used to hearing the pieces, the way dozens of pianists have played them.

If the performances of Ivo Pogorelich in the 80´s or the 90´s were like a spectacle of countless fireworks, bursting out one after the other, these days it is one firework, unfolding in slow-motion. And if one is patient enough, one can, through this decelaration, really sink into the musical story-telling, ponder, slow his own self down, denouncing the swirling craze of the ultra-fast-paced world outside of the concert hall, even if only for a moment.

Please enjoy our review from 2011, when Ivo Pogorelich performed in Vilnius: http://www.kulturkompasset.com/2011/11/04/ivo-pogorelich-in-vilnius/