PARIS/FRANCE: It is in some way very easy to be critic when the quality of a tenor and of an opera galla evevning is at the very top, and that was exactly what happend this Friday evening. 19.6. at Théâtre des Champs Élysées in concert with JOSEPH CALLEJA, our generations Luciano Pavarotti at the podium, with a dream program of the one famouse operae aria after another. – 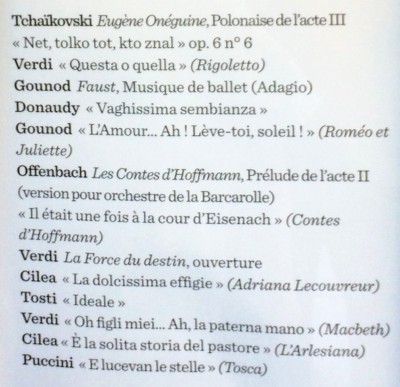 It was like a dream, and in the beginning i didn´t really believe it,

– and perhaps not espected it either, But this became the most fantastic opera experience in this century so far.

Joseph Calleja is our generations Luciano Pavarotti, as when Pavarotti was at his very best, and interesting is that it sound that Calleja has even more to give, so I am looking foward to the next time.

Joseph Calleja 19.6.15. When he should start on encore number 5, I knew that we were present to an evening of historical interest. This star tenor, so far the best of this century in his field, was giving us encore number 5. And let the audience vote for which number he should sing.

Usually we dont record this, and it is forbidden to do so, but is was such a fairytale evening at the very top of his carrier, so this would be of historically importence for the future to keep for the Opera music world, for Joseph Calleja and his fans.

As you probably don´t know: “’O sole mio“ is a globally known Neapolitan song written in 1898. Its lyrics were written by Giovanni Capurro and the music was composed by Eduardo di Capua. The titel and translates literally as “my sunshine”

But if you think this was the finish. No. Please look the following video with encore no 7. sung by Joseph Calleja, – and then it was time to run to the very last Metro.

– The Orchestre National d´Ile-de-France played lovely, their soloparts – The Polonaise from Eugene Onegin by Tsjaikovsky, ballet musique from Faust by Gounod, Barcarole from Hoffmanns Tales by Offenbach. The demanding ouverture to La Forza del Destino by Verdi and also the not so well known Orchestre part from Puccinis Le Villi.  Its inspired conductor Andrew Greenwood, was very well prepared and ready for a good joke and to follow the tenor in every little detail.  Many good solo details in the orchestra, violin, clarinett. A good choise of orchestra and conductor for this event.