La Gioconda with Urmana and Alvarez in Paris – Bastille 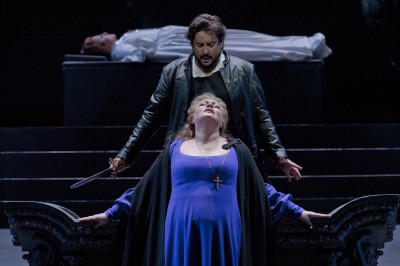 PARIS: With Violeta Urmana,  at her very best in the dramatic parts, in the titelrole, La Gioconda, her aria “Suicidio”  was extraordinary. Marcelo Alvarez as Enzo Grimaldo, (a Venezian prince, disguised as a Dalmatian seaman), his famouse aria “Cielo e mar” was brilliant.

Maria José Montiel (contralto) as Alvise Badoero, (La Giocondas mother) her aria in the first act “Voce di donna o d’angelo” was wonderful, and she received in the end the biggest applause. This young beautiful singer, played her role as the very old, blind mother of La Gioconda, so that the audience trusted in her!

Claudio Sgura as Barnaba, (spy of the Inquisition), and Luciana D´Intino as Laura Adorno, ( a Venizian lady) in addition to the brilliant guesting bass Roberto Scandiuzzi in the role as Alvise Badoero, (one of the leaders of the Inquisition, Laura’s husband).

The casting was brilliant, and together with the rest of the soloist gallery, the choire and the orchestra, choires, it became a big success, and spite it is a drama, it was also an amusing performance because of the parodic feeling in the end of enjoying an old fashion “soap opera” 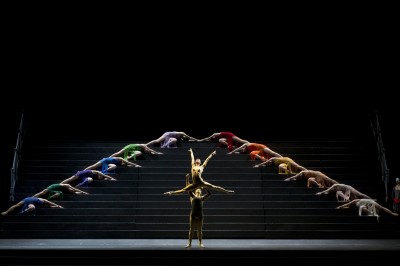 Dance of the hours, the ballet ensemble and the two ballett soloists Letizia Giuliani and Angel Corella in the middle. Foto: Andrea Messana.

The outstanding balletsoloists in the Dance of the Hours Letizia Giuliani and Angel Corella, together with 12 female dancers dressed in dresses in all the rainbow colours lifted it all. The “Dance of the Hours” section is considered one of the most popular ballet pieces in history. The ballet was very amusing parodied in Walt Disney´s classic Fantasia.

It all was  musically in the best hands (as usual) by the conductor Daniel Oren, it became an extraordinary good production of La Gioconda by Amilcare Ponchielli, for the first time at the Paris Opera repertoire. 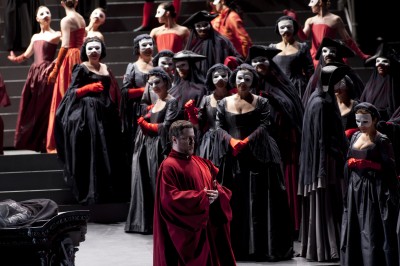 Orlin Anastassov (Alvise Badoero), but our evening it was Roberto Scandiuzzi, who sang that role, and the Choire of Opéra national de Paris, Foto: Andrea Messana

First performed in 1876, La Gioconda was a major success for Ponchielli, as well as the most successful new Italian opera between Verdi’s Aida (1871) and Otello (1887)
. It is also a famous example of the Italian genre of Grande opera, the equivalent of French Grand-Opéra tradition. 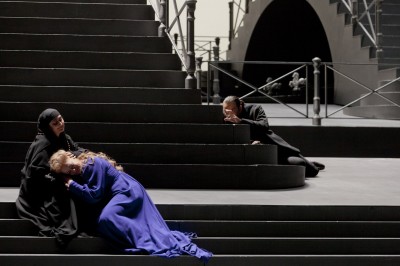 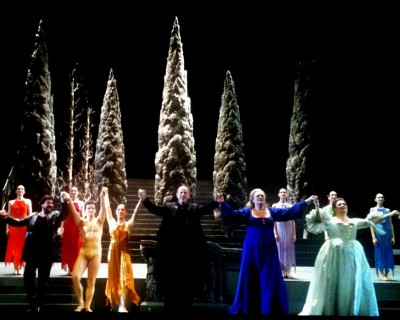