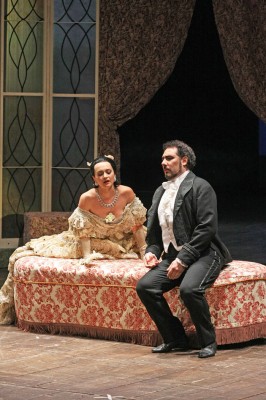 Dubrovskaja as Violetta and Iacolla as Alfredo, photo Massimo D’Amato

PISA: The season of the Teatro Verdi of Pisa continues with La Traviata, a coproduction with other theatres in Tuscany and Torre del Lago Puccini Festival, where it was first performed last summer, a revival or rather a readaptation, being a production conceived for a larger stage .

The main interest of the evening was Siberian soprano Irina Dubrovskaja, a young soprano already in full careers for some years, although I have never heard her before. Since I already was aware the rest of the cast would be on an average level, I knew one could not be too demanding. This productuion originated as a provincial show, and that is what unfortunately it ended up being.

Ms. Dubrovskaja has a bright voice small in volume, a light soprano, with a faltering Italian pronunciation, so much that she gives the impression of not really understanding what she sings about. Moreover, her acting is good but her vocal line is not faultless in intonation and agilities
. Her voice presents a strict vibrato, monotonous in accents and expressivity. She performs high E flat at the end of First Act, but that isn’t certainly enough; on the whole she is better in the Third Act, where she depicts Violetta’s character in a more convincing way. 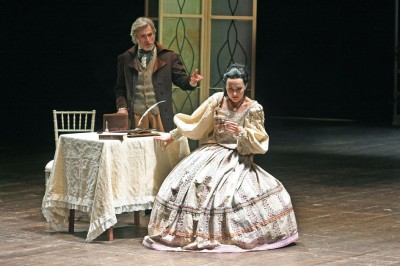 Tenor Stefano Lacolla (recently seen in Turandot in Pisa, even reviewed for Kulturkompasset) has a good voice, but he uses his instinct more than a refined technique. Generally high notes are good (but he tried the high C in his cabaletta, but he couldn’t hold the note long), but he doesn’t give the right attention to the phrasing and his intonation isn’t very good, he couldn’t create a convincing character nor vocally neither scenically.

At the contrary, baritone Stefano Antonucci was a good Giorgio Germont, apart some imprecisions and some notes not very sustained. Globally he was the most appreciable singer in this production. I prefer not to say anything about the other singers, really mediocre.

Conductor Bruno Aprea makes nothing more than beating time following the score, but talking about a personal interpretation is out of the question. It must be remarked that he has reopened the usual ‘cuts’ in the cabalettas of tenor and baritone. The Orchestra and chorus were functional, choreographies embarassing to be forgotten 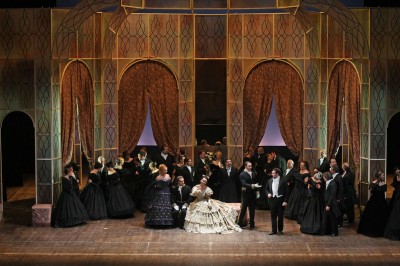 Scenically there was not much to see: the structure was a mono-set, made by large archs with some scenic elements; the costumes were traditional but beautiful. There was almost no stage direction, apart some “ideas” like showing the doctor in Last Act bringing some flower when he comes visiting Violetta.

The success was warm from the audience that filled the theatre, evidently well disposed: Verdi is Verdi, and La traviata is one of the most famous and beloved operas of the whole repertoire.

Read other reviews from La Traviata from Kulturkompasset: