By Henning Høholt on 10/29/13 • Categorized as Uncategorized

PARIS: Gaspare Spontini´s opera La Vestale was the season opening production at Theatre des Champs Elysées this autumn. The theatrea is famouse for its good tast and for its good celecton of cooperators, in this case the excellent ensemble conducted by Jérémie Rhorer, and the superb casting which included some of the best young soloists in the operatic world today. 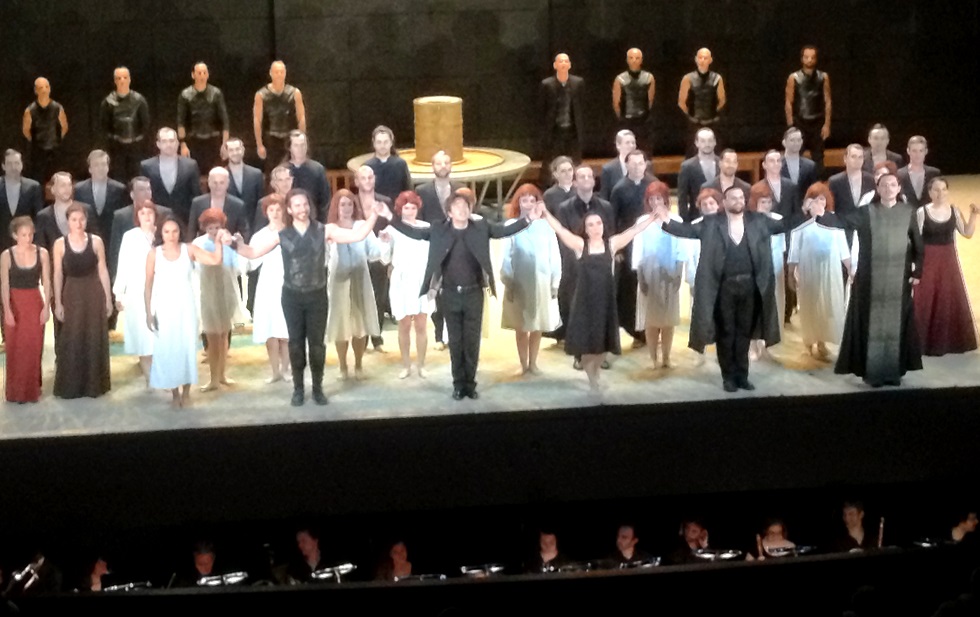 Honestly I have the good feeling that  Theatre des Champs Elysées, is climbing up to be the leading operahouse in Paris to day. However the house is not only playing operas, that is only one of the good sides of this 100 years old theatre house. It is allways presenting good operas, not allways the traditional repertoire, but finding some hidden juvels in the opera archives and then presenting them to the audience with the best possible soloist cast, ensembles, conductors, regi, costume, scenography and light. Giving their audience a real possibility to experience something extraordinary from the opera world. And not only something new by new contemporary composers, but by good well established old composers. Such a kind of a house is what Paris needs. And, of course, that is also why the theatre is full, full, full of audience. Furthermore the theatre is good finding first class cooperators also in the coproduction way. This production is a coproduction with Théâtre de la Monnaie in Brussels.

The leading role as the vestal virgin Julia is beautifully sung by Ermonela Jaho,  who goes “weak at the knees” over Licinius, the Roman general and lets the sacred fire go out, a sacrilegious slip that earns her the death penalty.  But she is being saved by the destiny, who brings her virginity dress set in fire, and saves her. Jaho gives us a lot of velvety tunes and looks right the in her role  part, and i feelt the she managed well the dramatic diva effects, that we still associate with Maria Callas, – who put her mark on the role in the 1950s. – at La Scala, Milano, at the opening of the 1954 season, to mark the 180th anniversary of the composer’s birth. – Only a few singers has been with that remarkable way of presenting it as Callas, but I feel that Jaho is doing it very well, and she looks right for the role, better than Callas did, still that Callas was only 31 years old then.

Also in her big number “Toi, que j’implore”, (Act 2. scene 2), I found it a hit, together with the folloving duet with Licinius – Andrew Richards  (ending Scene 3), still that her tuning a few places was variable. It is a demanding role

Transdermal penile delivery of vasoactive drugs isErectile dysfunction is often assumed to be a natural viagra vs cialis.

. These two scenes was the highlight of La Vestale.

I enjoyed the tenor Andrew Richards as Licinius, his sound for this kind of role is good. He is filling up the hall with a good sound allways present
. Jean-François Borras’ Cinna was good, i trusted in him.  Konstantin Gorny filled up the hall with his beautiful bass. A good casting.

Eric Lascade is for the first time staging an opera, after the first act it started to work well. I didn´t understand why he should place the two tenors, Richards as Licinius and Jean-François Borras as Cinna in tfe left corner of the stage for their long dialogue in the begining. Another detail, that Lascade has together with other theatre regisseurs, is that it seems that he dont believe in that the opera music can lift a performance by it self, so that when there is only the music, he is affraid that the audience is getting bored and he then need to put in some effects. This kind of effects is not allways needed. That is sometimes disturbing the music.

Lascade´person instruction was during the way very good. As this composer Spontini has included some ballet parts in it. I liked the way that Lascade has made for exemple, the first entrance of choire in the festive march choreographically, it worked well. If I remember correct a ballet piece was cut out (?), in fact for me, who also are writing about ballet, I missed that, as it is a relax between the singing, and makes a good atmosphaere. Still that the ballet music is written in another kind of atmosphaere than the operatic parts. But other composers has done the same.

The scenografic solutions in the first act was boring. After a while only the benches which constantly should be moved around, was disturbing the history. And since it is a very old history, the history didn´t get any help from that kind of scenography. But later on, I liked the idea of the temple “alike” installation. And the use of live candles on stage was beautifu, gave an intimate atmosphaerel, bringing a theatrical atmosphaere, who seldom can be made by spotlights, even if they are being worked well with.

Costumes very simple, except for Pontifex Maximum, and unfortunately, since both Julia and The Grand Vestale was weairing the same dresses in white and black, and later changing colour, and with dark hair both of them, I was some times not sure who is who. The costume section – Marguerite Bordat, need to think about also that detail. The could have been made different, for ex. longer for The Grand Vestale, as she is a more “prominent” figure in the Vestale house and shorter for Julia, as she is a young virgin.