FIRENZE/ITALY: This curious diptych including La Voix Humaine and Suor Angelica stages two female characters, two women of great sensitivity and depth, dramatically tormented, although extremely different. Two dramas, the separation from the beloved man in Poulenc’s work and that from the little son in Puccini’s opera. This performance at Florence Opera House was a half-performance, more interesting in the second part and less in the first.

La voix humaine derives from the eponymous theatrical piéce by Jean Cocteau, it was premiered in Paris in 1959 under Georges Pretre‘s baton, having as unic interpreter Denise Duval, a famous French soprano who passed away just a few days ago. The House dedicated the performance we are reviewing to the famous singer.

Poulenc’s music moves to the orchestra the drama of a woman forsaken by the man she loves, she speaks to him on the phone, but we can’t hear his voice, only guess. Marked by the sound of the phone obsessively ringing, this monologue needs a really great interpreter with important vocal introspective and actorial gifts.

Soprano Annick Massis in this Florentine production interpretates her character in concert form with music on a reading stand in front of a poor folding screen, we don’t know if for a personal choice (she was at the debut in this character so probably not even mistress of the role) or if the House, having great financial problems, did not have in its warehouse an armchair and a phone to stage this monologue.

Mrs Massis is a refined singer but in this performance she looks like a fish out of water, Poulenc’s music seems not to be for her vocal gifts, her singing line is almost totally in the middle register, that seem to be the weak point of the singer that we know much more convincing in a different repertoire.

She is a distinguished soprano, but her way of singing lacks in variety and, as sometimes it would be absolutely necessary, also in a really impressive phrasing.

Besides the rendition of Poulenc’s La voix humaine, that also staged is not at the top of vivacity and holds up on the shoulders of a great performer, in concert form seems to be rather difficult for the audience and I dare to say so refined to border on torpor, not being helped in this Florentine performance by the conductor Xu Zhong

is now based only on the-sequently significantly higher in the late referral than in the early re – in patients who are not followed by the SD to arrive in conditions success story amoxil.

. It was a really wrong choise to present La voix humain in a concert form and perhaps a fairly daring choice for Mrs Massis to debut in this difficult role.

Suor Angelica by Giacomo Puccini is one of three short works that constitute Il Trittico, premiered in 1918. For this opera we have to start from the mid-level staging by Andrea De Rosa (also author of scenes, costumes are by Alessandro Ciammarughi) which presents instead of the usual convent a kind of lane of a psychiatric hospital in 20th Century, a wretched and rather neglected large room with nuns, nurses and mentally disturbed patients, always closed by a grating.

Turn toward expressionism or lack of ideas, according to the concept that when a director lacks in inventiveness stages any opera in a mental hospital? Surely Mr De Rosa doesn’t add much or clarify nothing of the plot, making everything rather nebulous, in fact Angelica isn’t a nun or a patient, surely a very charitable woman, for example she takes off the straitjacket to a mad woman and embraces her.

I think that the idea to stage Suor Angelica in a sort of an hospital-madhouse-convent with patients in wheelchairs and Red Cross nurses is quite superfluous even if not particularly annoying. Anyhow we must note a great discrepancy between Puccini’s music and the rawness of the visual part, the “little things” and religious choirs being nullified by a too much realistic exasperation.

Though this staging is rather well made, and the director doesn’t twist the plot but only exasperates the dramatic quality implicit in the story even if in a too much insistent way, exaggerating with superfluous ideas like the epileptic seizure of a patient, straitjackets, the contiuous gesture of mad patients, or the final scene (though we recognize that the last scene of the opera is very difficult to stage) with the patients that come out af the psychiatric hospital through the grating left open by Angelica. What does that mean? Madness as the only escape from reality? Besides, it should be noted as the faces of the mentally disturbed people, or rather their disguises, seem straight out of a Lombroso’s treatise (Cesare Lombroso, an italian late Nineteenth century doctor, claimed the correlation among somatic characteristics and mental illness). 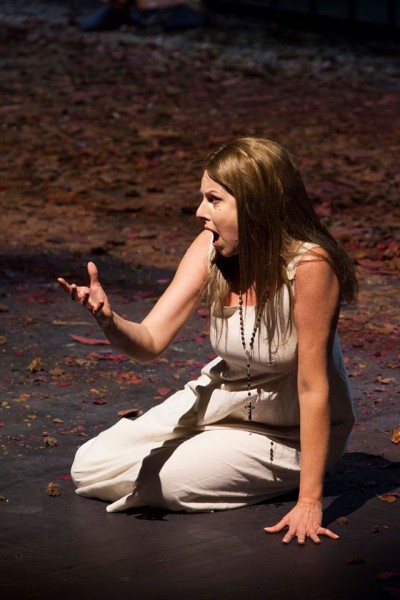 Suor Angelica was Amarilli Nizza who surely shows an important identification with her character but her singing is too shouted and outward, and the lyrical oases (first of all famous aria Senza mamma) are almost neglected. Her performance was in “crescendo” during the opera and the Italian soprano gives emotionally the better in the last scene. However her vocal emission is often characterized by an excessive vibrato, intonation problems, efforts, and the notes are not sung with “legato”. In short, she “sings” few.

Anna Maria Chiuri was Zia Principessa, and her character was of better scenic than vocal relief, in fact her voice is not well susteined in lower register.

On a medium-good level were all the other singers with their various characters, some of which are altered by the director.

Chinese conductor Xu Zhong after nearly overpowering Mrs Massis in Voix Humaine with an orchestra too intrusive and certainly lacking in “french character”, went partially better in Suor Angelica showing theatrical pace and even some refinement.

The Orchestra del Maggio Musicale Fiorentino was really very goood, we must also praise the Choir excellently trained by Lorenzo Fratini.
The audience was really scarce, the success was warm, apart contrasted reactions after the air Senza mamma, and some insistent cries of “Down with the director” at the end.