PARIS/FRANCE: The Parisian Gala Les Etoiles du XXIème siècle has become over the years a major event in the Ballet landscape. The 17th balance between classical repertoire and contemporary works.

This event’s best quality is to create the opportunity to highlight new talents, as well dancers as choreographers, and welcome back regular guests who are already well known all around the world, like Daniil Simkin or Polina Semionova. 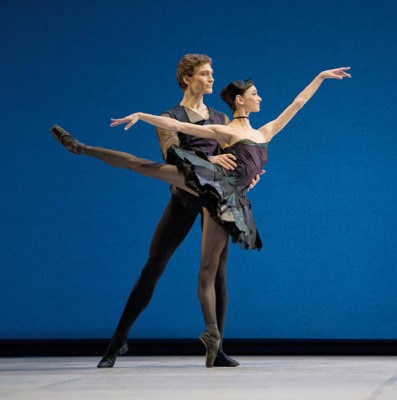 Lucia LACCARA and Marlon DINO from Ballet of Munich.

This year was marked by the presence of Lucia Lacarra, who danced as a Principal with the National Ballet in Marseille when Roland Petit was the director, and who is now Principal dancer with the Ballet of Munich
. She has been a regular guest of the Gala and was clearly the star of this edition. Along with her partner Marlon Dino, also from the Ballet of Munich, they performed two very beautiful “pas de deux”: an extract from La Dame aux Camélias, by John Neumeier, and the Ben Stevenson’s Three Preludes, on the music by Sergeï Rachmaninov.

Oksana Skorik and Timur Askerov are two very promising dancers from the prestigious Mariinsky Ballet of Saint-Petersburg. They showed once again that Russian dancers are at their best in the classical variations, performing the Black Swan “pas de deux”, from Tchaikovsky’s Swan Lake. Everything was perfect, including the very demanding series of “fouettés” during the Coda. 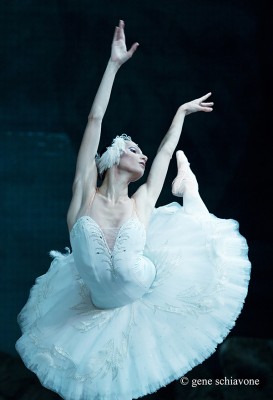 Oksana Skorik might be the next Svetlana Zakharova
. They also presented a work by the rising young Russian choreographer Vladimir Varnava, Window in Midwinter, who created a work for Zakharova in 2013.

The very famous Maria Kochetkova with her partner Joaquin de Luz, were both wonderful. She is a pure product of the prestigious Bolshoï Ballet School and is now Etoile with the San Francisco Ballet, while he is Etoile with the New York City Ballet, two of the most prestigious companies in the occidental world. Their performance of Rubies extracted from Jewels by George Balanchine was exquisite. They also presented a work by a young South-African born choreographer, Andrea Schermoly: Kübler Ross, on the music by Antonio Vivaldi.

To continue with the American companies, Isabella Boylston and James Whiteside, two dancers from the American Ballet Theatre, presented a work by Benjamin Millepied, maybe as a wink to the new French director of the Opéra de Paris. Everything Doesn’t Happen at Once was created in 2009 at the ABT, on a music by David Lang. 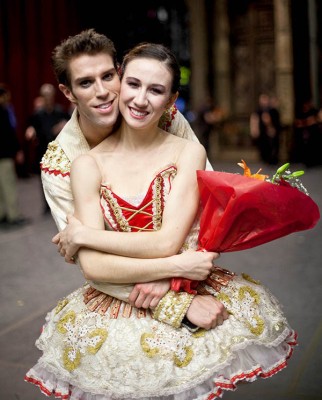 Millepied shows in it his great talent as a choreographer. Isabella Boylston and James Whiteside are also impressive in the “pas de deux” extracted from Marius Petipa’s Giselle, Act 2
. Whiteside doesn’t jump very high but the speed of his turns and “entrechats” is quite impressive.

Alicia Alonso is such a name in the Ballet World that it is always a honor and a privilege to see dancers from the Cuban National Ballet. The 14th audience the wonderful couple formed by Yolanda Correa and Yoel Carreno, both Cuban but now dancers with the Norwegian Ballet in Oslo.

For this 17th another very promising couple: Manuela Navarro and Gian Carlo Perez Alvarez, both Principal with the Cuban National Ballet, soon to be Etoiles. They danced the Slave and the Merchant “pas de deux”, from Marius Petipa’s Le Corsaire and Sobre un Hilo, a work by Lyvan Verdecia, a young Cuban choreographer.

The male couple danced in BLESS – ainsi soit-IL, which is a creation by Bruno Bouché on the music by Johann Sebastian Bach for the French company “Incidence edition  was, once again, full of surprises and discoveries and showed a very good edition of the Gala presented to the Parisian edition, one had the opportunity to discover Chorégraphique”. Aurélien Houette also danced a very interesting version of Afternoon of A Faun, by the French choreographer Thierry Malandain.

is a wonderful opening for the Ballet Season.

The next Ballet appointment at the Theatre des Champs-Elysées will be the Jiri Kylian program “Future Memories”, with the Norwegian National Ballet on September 22, 23 and 24.

Jiri Kylian photographed at the “home” of the Norwegian National Ballet, Oslo by Henning Høholt