By Fabio Bardelli on 7/09/13 • Categorized as Classical music,Music CD's 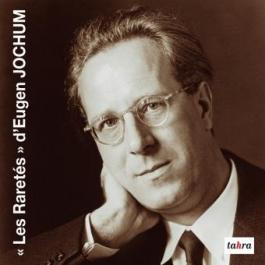 The cover photo of the Tahra CD that we are now reviewing shows conductor Eugen Jochum as a young man, very different from the old man whose photos we know very well. From 1949 to 1959 (surely this photo belongs to that period) the German conductor led the Sinfonieorchester des Bayerischen Rundfunks, an orchestra that he moulded from a radiophonic one to an internationally important, that he conducted in many concerts in a very large repertory.

We can find Jochum’s real rarities on this CD, some scores that he rarely conducted and whose tapes are not known, apart these that we are speaking about. His most famous repertory includes authors such as Bruckner (Eugen Jochum is unanimously considered peculiarly reliable in performing Bruckner), Orff (his CD rendering of Carmina Burana is downright historic), and the 19th century great symphonism
.

His performance of Suite nr. 2 from Ravel’s Daphnis and Chloë is very involving, played with a luxuriant instrumental taste, showing rythm and expressive nuances so to let us forget that the conductor’s roots aren’t French at all

German soprano Annelies Kupper sings Vier letze Lieder by Richard Strauss with her rather correct vocality and particularly interesting in the middle register, with a polished and nice voice. She is really well accompained by Jochum in this Strauss’ score, standing out particularly in the last Lied (Im Abendrot), where we can appreciate a really good rendition, that points out the good collaboration among them
.

A little apart Agrippina Ouverture, performed not certainly following modern philology but as it was played in the 1950s, that shows a nice colour and legato of the strings. Die Fledermaus‘s Ouverture has a great sense of theater, but is lacking in a more light and flexible Viennese style

The Rondò KV 382 written by Mozart when he was 26 years old, isn’t very famous, but is a miracle of circumspection and vivacity, a spontaneous and salon music, full of wild fantasy and sense of amusing in music as so often we find in Mozart’s scores. The great Swiss pianist Edwin Fischer (1886 – 1960) dialogues with Eugen Jochum in a very emotional way, showing light dialogues and an extrahordinary dialogue among piano and orchestra. It’s really a great joy to listen to such a way to play.

Good the techincal level of this Tahra CD, recording and mastering are good, the booklet contains a short but interesting story about Jochum’s Munich era.