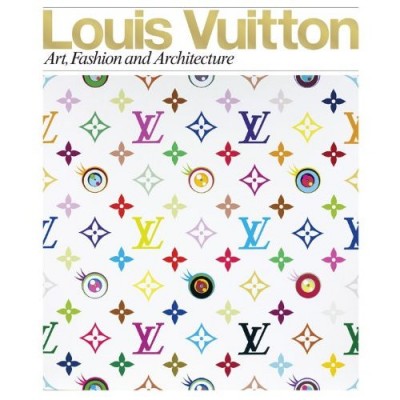 MILANO/NEW YORK: Luxury and art have never been more closely linked than they are in these early years of the twenty-first century.

Virtually all the world’s major luxury houses have associated themselves with contemporary art through sponsorships, commissions, or foundations, and these points of exchange nourish the increasingly symbiotic relationship between fashion, art, and other design disciplines.

–
The book is structured as a seductive anthology of the house’s most visible collaborations. Critical essays examine and position Louis Vuitton’s patronage—under the guidance of Artistic Director Marc Jacobs—during one of the most fertile periods of contemporary art and design.
–

“At a whopping 400 pages, including three book-in-books, “Louis Vuitton: Art, Fashion and Architecture” is a rich brew of all the house’s creative associations…” ~Hint Magazine“Many style books are compendiums of ad campaigns.  Louis Vuitton’s revels in the collaborations of Marc Jacobs with Takashi Murakami, Richard Prince and Stephen Sprouse.” ~InStyle Magazine“Couture, art, and design collide in this lavish book celebrating the luxury-goods firm’s creative collaborations with artists, photographers, and architects.” ~Elle Decor.com“The It accessory this fall may not be a bag, but rather a book.  Louis Vuitton: Art, Fashion and Architecture (Rizzoli) is a 400-page tome that chronicles the relationships between the storied brand and assorted luminaries in the art, architecture, and design realms.” ~Nylon Magazine“This tract tracks the French house’s cross-pollinated conceptual approach to aesthetics, from the evolution of its iconic monogram canvas to the starchitecture of its international retail shops (Zaha Haddi, Shigeru Ban). Heady critical essays are interspersed amid the provocative ad campagine poses.” ~Angeleno“This book is a document of an astute company’s ability to use architecture to spread its brand, while at the same time advancing architecture in its effects and aspirations.” ~Archidose

Marc Jacobs is the Creative Director of Louis Vuitton Malletier and the chief designer of Vuitton’s ready-to-wear collections.
–
Series: Highlight | Publication Date: October 4, 2011
–
COUTURE ARCHITECTURE ART AND INTERIOR PRESENTATIONS IN KULTURKOMPASSET
Kulturkompasset.com is during the winter/Spring 2011-2012 presenting a lot of interesting books from the Couture business, presenting books about some of the worlds most famouse names, not only famouse for their couture and fashion, but also well knovn because of their accessoirs, and for many also their parfume and cosmetics.
In this we are presenting books from publishers all over the world. It is our wish that we through this can help our readers to get an easier way to find the books interesting for the different fields, developing a wider knowledge about couturier, fashion, design.
–
Henning Hoholt
Editor in chief
Kulturkompasset
Oslo Paris Vilnius
Tagged as: Design, Fashion, Literature, Louis Vuitton