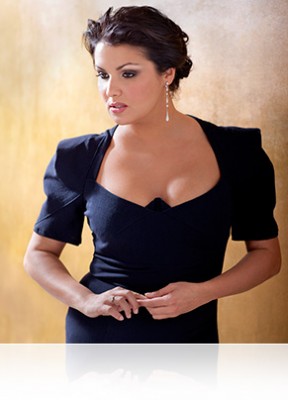 BERLIN: Divas are not what they used to be… one of the very few singers nowadays who can define herself like a ‘Diva’, Anna Netrebko is very down to Earth and on stage she’s very communicative and builds a good relationship with the audience. She doesn’t seem to create a myth of herself, and this is better to day, moreover being very popular she can gain more audience to opera world.

In these weeks, the Russian soprano is touring Europe in concert halls with a concertant version of Peter Tchaikovskij’s opera Iolanta. After having been in Paris, last performance has been Berlin Philharmonie on 14 november.  Anna Netrebko made her debut as Iolanta in 2009 in a St. Petersburg staging, then reprised it last summer in Salzburg, still concertant. The part fits perfectly to her, and to sing in her native language makes her more at ease ……..

One of his last compostions, coming right after the dark mood of Pique Dame, Iolanta is a more serene work, a very pathetic sad story with a happy end full of trust in ourselves and a loving God, as we see in the final hymn. It’s rarely performed, what is a great loss for the audience, offering many fascinating melodic lines in perfect Tchaikovskij style.
The story itself is pathetic: Iolanta is a blind young princess. To avoid her unhappiness,  her father simply made her never aware of her infirmity: she has never heard about the possibility to see, or the existence of light, colours and so on.
Accidentally young prince Vaudemont meets her and fall in love, and he puzzles her with his speaking of misterious things

his erectile dysfunction, including the nature of onset,options applicable to his clinical condition and the related cheap viagra.

. Thanks to the love for Vaudemont, and with the intervent of the arab doctor Hibn Akia, Iolanta finds in herself the force to heal and gains the power of sight.
Almost every character has an aria on arioso, there are enthralling Concertati and a moving duet between the two lovers.

This performance has been semi-concertant: even without scenery and costumes, the singers actually acted their part, and made the story really ‘living’ to the audience.

The part of Iolanta fits perfectly to Anna Netrebko
. To sing in her native language makes her more at ease and let her ‘enter’ better in the part. She acts with simplicity and credibility, she’s fascinating as unconscious young girl, and involving when slowly she understands that something wrong is in her life. Vocally the singer is in great shape: her
warm timbre is homogenous along the whole score (only in the highest notes it becomes a bit thinner), emission is fluid and effortless, and expressivity and phrasing are model.
Moreover Netrebko is also a very comunicative artist on stage, and she knows how to ‘reach’ the audience.

She was supported by excellent colleagues, starting from Sergey Skorokhodov, Vaudemont, with his strong and firm tenor, and baritone Lucas Meachem, who had his great moment with his aria in 6th scene (“Who can be compared to my Mathilde”), taken with such a vocal and interpretative force, that he has conquered maybe the longest applause of the evening.

We’ve appreciated also Vitalij Kovaljov, imposant with his bass as it’s expected from a character as King René, and Vassily Savenko, ho has given the right mysterious tone to the arab doctor Ebn-Hakia.

Very good also the other parts, starting from Monika Bohinec, tender and passionate Martha, and Iolanta’s friends, Theresa Plut (Brigitte) and Nuška Rojko as Laura, who have introduced the opera lovely supporting Iolanta.

JunHo You has a convincing tenor, here in the short part of Almerich, as well as Luka Debrevec Mayer (Bertram).

Emmanuel Villaume has conducted Slovenian Philharmonic Orchestra at his best, creating a perfect support for the voices but also expressing the melody and the passion in the score, well supported by the ensemble.

Berliner Philharmonie Hall was full but not at its maximum – we must not forget that the ticket price was very high; this didn’t affect the success of the evening, with enthusiastic ovations to all the artists but of course more than any others for Anna Netrebko.

Iolanta, Op. 69, (sometimes Iolanthe) is a lyric opera in one act by Pyotr Tchaikovsky. The libretto was written by the composer’s brother Modest Tchaikovsky, and is based on the Danish play Kong Renés Datter (King René´s Daughter) by Henrik Hertz, a romanticised account of the life of Yolande de Bar. . The opera received its premiere on 18 December 1892 in St. Petersburg.