Review by Fabio Bardelli, fotos: by Pietro Paolini and Michele Borzoni from Terraproject/Contrasto 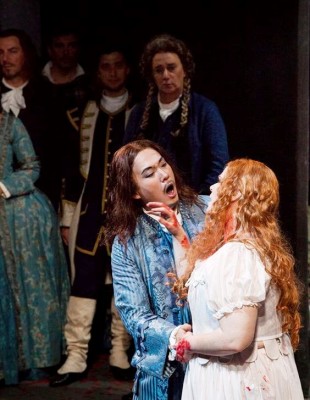 The beautiful costumes and scenes are by Paul Brown, who conceives a glittering Scotland, lunar and well characterized bytartan of various scottish clans and families
. Colored spots of heather on the moors, wind-bent withered trees, skies that from far seem painted with large brushstrokes slightly Turner-style and elegant costumes are the pleasant frame of this staging that we view each time with pleasure
. The singers’ acting is quite traditional but with streaks of elegance and always pleasant to look. 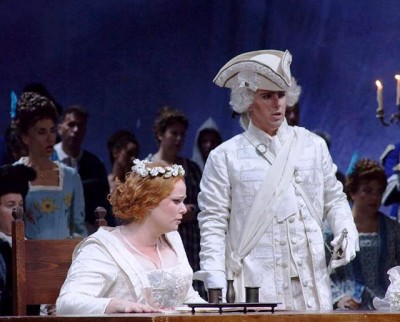 We must find fault with the author of scenes to have considerably reduced the space of the stage with a sort of useless “frame” on proscenium and even with a raised level on the normal level of the stage: really despicable ideas for Florence Opera House whose stage isn’t very large and thus becomes much smaller. I would note also the bad taste of showing at the end of the opera Lucia’s body laid out on a stretcher, a superfuous expedient that could be avoided nothing adding nor visually to the performance.

Anyhow the Romanticism of Walter Scott, the English novelist who inspired librettist Salvatore Cammarano, is modernly suggested in the general tone of this staging, with adequate colors and accurate costumes. Nick Chelton gives us a rather refined light designing. 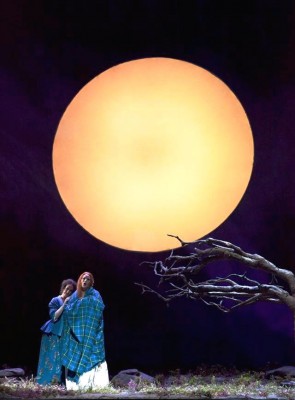 Conductor Fabrizio Maria Carminati is the author of some venial cuts but also fails to deduce the essential points of the drama. Although we must admit his mastery in meeting the needs of singers, he seems absent in many scenes and alternates unnecessary band-like moments to other quite gray and soporific: an uneven but on the whole rather functional conducting.

The orchestra is good enough, the first flute in the cadence of Madness Scene is particularly sharp in following the flourishes of the protagonist.

Jessica Pratt is a luxury Lucia, even starting a bit stealthy in the first act with her entrance aria “Regnava nel silenzio”, but then goes on at ease admirably carving out a character that is in her vocal chords. 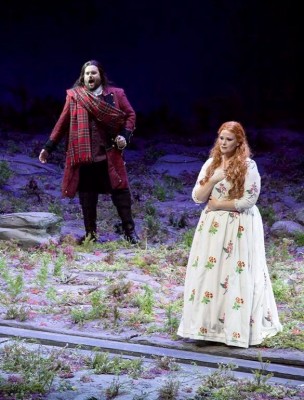 She starts from an hedonistic conception of singing and of her character, but founds thrills and ripples in delineating in her own way the unhappy girl. She compensates the scarce incisiveness especially in middle and lower register to reach out into astral dizzying coloratura (even encoring by popular acclaim the cadenza with the flute of Madness Scene with an almost irritating nonchalance) and no matter for some little almost inevitable tone sliding and for some notes in upper register not just fine: we admire the courage and broadmindedness of the anglo-australian soprano to “create” as a real Primadonna a great character lyrical and passionate, quivering and multifaceted, rich in expressivity.

She is quite admirable in cantabiles, and her voice rises up growing stronger in high notes, the upper notes are sometimes thin but always perfectly sonorous. The personal triumph obtained from the florentine audience is a demonstration of how her character is well depicted, not only vocally but also as interpretation, as relief, and how much the young soprano has involved the spectators. 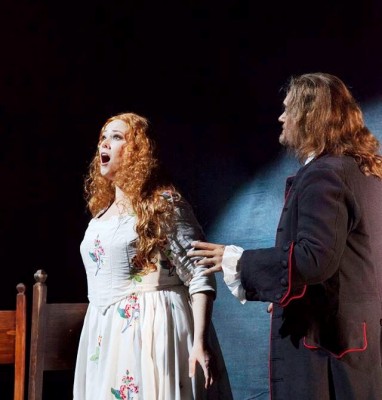 Unfortunately the rest of the cast wasn’t at the same level.

Tenor Jean-François Borras as Edgardo shows a not despicable voice, but rather inequal: his singing line is generic and predictable, his phrasing monotonous, and if the global impression made during the whole opera was not bad he ruined it with last act’s final scene, vocally not well-made at all, with many tone sliding and many notes not well sustained.

Baritone Julian Kim as Enrico Ashton shows a rather interesting voice, but unfortunately he sings in a very monotonous way and with accents stylistically not fitting in an opera like Lucia di Lammermoor.
Bass Riccardo Zanellato as Raimondo doesn’t make great things but sings rather appropriately his aria “Dalle stanze ove Lucia”.
Emanuele D’Aguanno gets on in the rather difficult character Lord Arturo and Simona di Capua is rather well as Alisa, totally inadequate the performance of Saverio Bambi as Normanno.

The chorus instructed by Lorenzo Fratini has well sung. The audience that filled the House gave a real triumph to Mrs Pratt and a great success to conductor and all the singers.