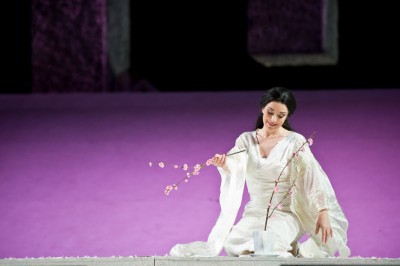 LUCCA: “The little butterfly will fly”: these prophetic words were written by Giovanni Pascoli, one of Italy’s foremost poets, on an historic postcard to Giacomo Puccini, after the “fiasco” of Madama Butterfly at La Scala Theater in February 1904. Puccini Festival in Torre del Lago now most appropriately dedicates the performances of Butterfly to the great Italian poet, born in 1855 and dead in 1912, in the 100th anniversary of Pascoli’s death, whose subject-matters are often considered very close to Puccini’s
. 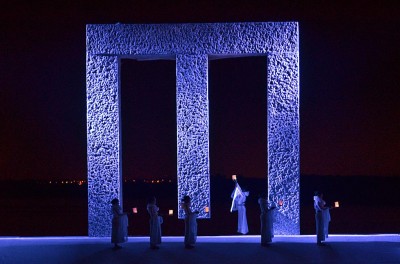 The opera was performed in an old staging directed by Vivien Alexandra Hewitt,  already seen many times on this same stage. It is a good idea to repropose a good staging such as this one, not to mention that is saves money, something that Italian theaters, and generally the Italian culture world, are now forced to do. At any event I confess I prefer to think that the choice was made more for its artistic worth than for financial reasons.

We saw no oleographic “postcard-Japon”, no useless exoticism, only a few studied colours: the stage was almost empty, with only an inclined plane and some abstract sculptures by set designer Kan Yasuda. No background wall, the stage was open on Lago di Massaciuccoli which seemed to surround and enclose the characters and their human events. 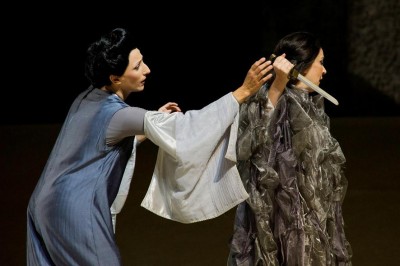 Certainly the production heavily relies on sets and costumes (beautiful with only some exception, designed by Regina Schrecker), because director Vivien Alexandra Hewitt limited her work to very accurate didascalic and essential acting instructions to the singers and choir

psychologic aspects, may often require a multidisciplinaryinitial diagnostic work-up and evaluation. This evaluation How does cialis work?.

. The most striking element is the rhythm of the acting, slow and solemn acting when necessary, and only at times more heartfelt: Hewitt seems to give life to the characters from inside and give new vital energy to the lyrics and its descriptive details
. In short, minimalism both in scenes and in gesture.

Young conductor Valerio Galli seems to know very well the score, getting very good timbric effects. He follows the singers with participation and conducts the symphonic pages with skill: for example, the orchestral line under the duet of 1st Act, or the Prelude to the 3rd Act (sadly wasted by the scenic idea of showing Goro taking photos of the sailors with the geishas…). Anyway he’s a young promising artist, and he can give us good surprises in the future: “it would be interesting to hear Madama Butterfly conducted by him in a real theatre, not in open air, for a better evaluation”. 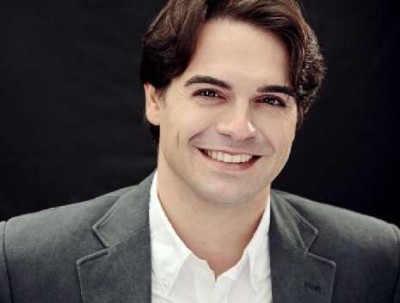 the young tenor Leonardo Calmi sung the role as B.F.Pinkerton in Madama Butterfly in Lucca.

The title role was sung by Donata D’Annunzio Lombardi, who knows it very well in all its aspects. She sings with a great vocal intelligence and never forcing her voice, that maybe does not have a particular charm or the right volume to sing in open air, this reflecting in some problems on high notes. Anyway, her intense identification with her character is really moving, in complete agreement with conductor and stage director.

In this performance, Pinkerton was tenor Leonardo Caimi, generous but very generic, who in some moments makes up for his vocal limits, particularly on high notes, with a better acting and a more accurate phrasing
.

As Sharpless we saw young Turkish singer, Kartal Karagedik, with an interesting light baritone voice. His voice has a wide range, is vibrating and resonant and he uses it with intelligence. As Sharpless he is very convincing, touching and emotionally involved: his impressing phrasing in duet with Cio-Cio-San in the 2nd Act could be almost a model. 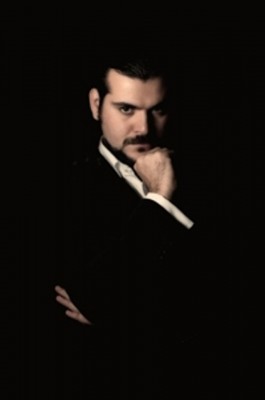 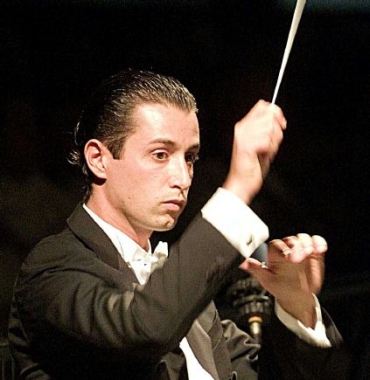 Valerio Galli. Conductor. " it would be interesting to hear Madama Butterfly conducted by him in a real theatre"

Goro was Nicola Pamio, whose acting was more convincing than his singing, and Annunziata Vestri, a very good Suzuki. All the other singers gave good performances in their respective roles. Notably, Prince Yamadori comes on stage with an improbable West dressing, and Kate Pinkerton, in last act, is dressed as an American actress in 30s. The name of the child who played Butterfly’s son wasn’t on the bill, but he was pretty and seemed at ease on stage, and he deserves to be mentioned.

The light design was very evocative, and the Puccini Festival Orchestra played very well, while the Chorus gave a mid level performance.

At the end, huge applause from the crowd that attended the opera in this fresh and windy night, on the shore of Puccini’s lake.