MOULIN ROUGE allways a pleasure to visit in Paris!

Even a Norwegian Girl, Moly from The Norwegian West coast is member of the Doriss Girls. ©Moulin Rouge®_J.Habas

“If i shall recommend visitors, coming to Paris to enjoy a real Paris show
.

My only recommendation is MOULIN ROUGE at Montmartre”.

The Moulin Rouge, world-wide famous thanks to its French Cancan, and immortalized by the painter Henri de Toulouse-Lautrec, has always presented sumptuous shows to its spectators: from Valentin-le-Désossé and la Goulue’s Quadrille to the Redoutes and Operettas, from Colette to Mistinguett‘s great revues …the concept is still the same at the Moulin Rouge: feathers, rhinestones and sequins, fabulous settings, original music and of course…the most beautiful girls in the world !

This is absolutely first class, and one of the big events in Paris. If you shall only chose one show in Paris. It must be Moulin Rouge. Many international stars have performed on stage at the Moulin Rouge: Ella Fitzgerald, Liza Minnelli, Frank Sinatra, Elton John… They have all given exceptional galas, following in the footsteps of French celebrities such as : Maurice Chevalier, Jean Gabin, Edith Piaf or Yves Montand. 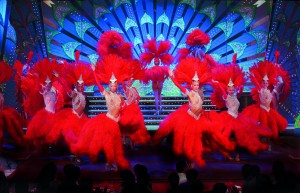 After several times having visited Moulin Rouge with international guests, I am every time leaving the house very impressed. The one more beautiful scenery is following after the other. Great variations in the ideas and the themes the show is build up around. In addition the changing of famouse artists of international class:  Jonglører, acrobats, clowns, entertainers who split up the large colorful and wellcomposed sceneries, so there is variety, excitement and humor of the show.  The many variations in the show, gives a big variety, the good ideas for and behind each picture, the deliciouse color combinations, the feathers, good lighting and music following each idea. The acrobatic, clown, circus with the small horses, and last, but not least the real Frensh Can can, with outstanding dancers.  Time is running during the show. Furthermore the first class service from all the staff is extraordinary good.

For 120 years, the most legendary cabaret in the world has welcomed millions of spectators who have come to admire the famous shows ! Today, the show of the Moulin Rouge “Féerie”, continues the tradition.

You’ll experience the Moulin Rouge’s new “Feerie” review and the essence of Parisian cabaret. A troupe of 100 artists, including 60 legendary Doriss dancers, will entertain you dressed in exotic costumes of feathers, rhinestones and sequins. The sumptuous sets and vibrant light show of “Feerie” provide a colorful backdrop for brilliantly choreographed performances on moving staircases, in a gigantic aquarium, on swings and in garden settings.

The Moulin Rouge’s show, “Féerie”, has been created by Doris Haug and Ruggero Angeletti, who, since 1961, have been the directors of the most famous shows in the world.

Choreographed by Bill Goodson, “Féerie” consists of a troupe of 100 artists, including the 60 Doriss Girls that are recruited world-wide ; 1000 costumes of feathers, rhinestones and sequins, designed by Corrado Collabucci, and set up in the most famous Parisian workshops (for example, 800 pairs of custom-made shoes of the size 35 to 47, …) ; sumptuous settings with shining colours and unique designs created by Gaetano Castelli and made by Italian artists ; the best international and outstanding acts ; and the expected return of the giant Aquarium… all of that with music by Pierre Porte, using some 80 musicians and 60 members of the chorus.

The theatre lights switch off, the curtain is raised…and the entire troupe appears on stage, under the admiring gaze of the audience who find themselves entering the “Garden” of the Moulin Rouge to discover the magical atmosphere of the place
. A touch of nostalgia !

What kind of adventures can happen to a pirate whose boat is anchored in Indonesia ? Dreams ? A perfect woman’s love ? … Once in the land, one meets priestesses, or a Gorgon in her temple surrounded by snakes, women jewels, tigresses, …

Will Sandokan have the opportunity to offer his treasures to the lady of his dreams or will we be witnesses to a sacrifice of love in the pythons’ den ?

The circus comes to town…with its band of clowns, Siamese twins, pierrots, acrobats, jugglers, weird wild animals and six miniature horses ! A colourful scene with beautiful music which ends with the great parade of the Doriss Girls andDoriss Dancers.

The Moulin Rouge pays a tribute to Parisian women throughout the years : on the 14th of July, for the Liberation of Paris … with Java or Boogie music . Time passes and leaves space for new generations of women, more beautiful and free than ever ! 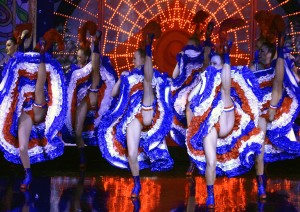 At the highlight of this tribute, the Doriss Girls dance the world famous French Cancan !

In addition the staff, servants, the good following up, the welcoming atmosphaere, still with so many visitors night after night, and performance after performance nearly every day of the week, makes that the feeling of that this is the best show in Paris.

The 6 th of October 1889, the Moulin Rouge opens its doors and welcomes for the first time on stage some young girls who perform a very different dance from the others : the Quadrille. Revolutionary movements, screams, boisterous rythm … frills and flowing skirts are lifted to show the young dancers’ legs and reveal their panties
.

Most of the time, the dancers were “amateurs”, who by day were mainly washerwomen, linen maids, laundresses, seamstresses, and who transformed themselves into Quadrille dancers at night.

This new dance was a success and immediately attracted the crowds : middle-class people, princes, artists, writers… they all came for a little fun !

Two years later, the Quadrille was still fashionable and spread abroad, to the other side of the Channel. A British subject named Charles Morton decided to change the name of the dance and call it “French Cancan”, A funny dance that makes a lot of noise and comes from France !

Many lady dancers with suggestive names became famous : la Goulue (the glutton) – the Toulouse-Lautrec’s muse – Nini Pattes-en-l’Air (a leg-over), Grille d’Egout (drain cover), la Môme Fromage (kid cheese)… Today, some 120 years after its first steps were made, the French Cancan is still presented every night on the Moulin Rouge stage, and has been in every show since then.

And dancing the French Cancan is not possible for everyone ! For this dance requires specific qualities both artistic and physical
. A training period of five weeks is necessary for every new girl and the rehearsals are very frequent.

The Moulin Rouge’s French Cancan is famous and reclaimed world-wide. Be it for the Cannes Festival, Hollywood or even Hong Kong, the Carnival of Rio, Sydney, the troupe of Cancan dancers never hesitates to cross the frontiers to represent the Moulin Rouge and Paris.

The one and only original French Cancan is, and will always be, the one performed at the Moulin Rouge.

This is a beautiful story that of a little girl from Germany who was taking dancing lessons without her parents’ knowledge and who became Miss Doris, the Moulin Rouge’s famous ballet mistress… Between the Karlshsruhe Opera and the Conservatory, she passes her diploma as a dance teacher and arrives in Paris, where the cabarets attract her. Miss Doris create her own troupe of dancers, named the “Doriss Girls”. From 4 in 1957, they are now a troupe of 60.

From 1961, Jacki Clérico, the owner of the Moulin Rouge, quickly recognizes the qualities in Miss Doris and Ruggero Angeletti to be the two choreographers that will be able to create great revues. The Doriss Girls have always been recruited from all over the world. Since 1997, Janet Pharaoh, the new ballet mistress auditions from Las Vegas to London and from Sydney to Paris to recruit dancers of both sexes who are able to join the show and perform on the Moulin Rouge stage. Amongst the 14 represented nationalities, main origins are Australia, Great Britain and Eastern Countries … and France !

Some criteria are compulsory : a good base of classical ballet training for all of them, the girls have to measure at least 1.75 m (5’8” ) and have astounding figures that will leave the spectators spellbound

difficulty due to medication or common changes in erectile How long does cialis take to work? penetration (entering your partner)?.

The artistic directors pay particular attention to the aesthetics and the physical condition of the troupe : losing or gaining weight is controled ( + or – 2 kilos), cutting or dying one’s hair is strictly monitored… As well as regular rehearsals and dance classes the troupe, male dancers in particular, work out everyday with the Moulin Rouge fitness facilities in order to keep their bodies looking good for the Clients appreciation.

In addition to the 2 shows performed every night, the artists train regularly and continue taking dance lessons to remain at the height of perfection.

And every week, under the watchful eyes of the ballet mistress, Janet Pharaoh and her team (choreographer assistant,Cancan teacher, captains, …) and the stage manager, Thierry Outrilla, the Doriss Girls and the Doriss Dancers rehearse the show’s different scenes.

The show must be perfect every night !

Supervised by Henri Poussimour, the Moulin Rouge’s Brigade, which consists of 120 maître-d’s, headwaiters and servers, works in the legendary hall which accommodates up to 850 guests.

Every night, 25 cooks prepare the meals served to our Clients under the management of our Chef, Laurent Tarridec and his assistant, Gérard Hotz.

Their wines and champagnes are selected by our wine cellarman among the famous french best growths.

The dinner is accompanied by the Moulin Rouge orchestra and allows people to enjoy the dance floor until the revue begins.

• 8 millions Euros investment for the creation of “Féerie”

• 1000 costumes of feathers, rhinestones and sequins

Please visit http://www.moulinrouge.fr/ for fully information about all the questions you may have.