Nabucco in Firenze. Zanellato and chorus

FIRENZE/ITALY: The same production of Nabucco by Leo Muscato with sets by Tiziano Santi, costumes by Silvia Aymonino and the lights of Alexander Verazzi was staged less than three years ago in Florence.

We reviewed this production for Kulturkompasset in its time, and for the visual part (which all things considered seems like the most interesting feature of the actual performance) we can refer to what we wrote on that occasion: “The staging by Leo Muscato […] creates a refined and elegant setting to the plot, staged near to the period required by libretto. There’s no rubbish according to the worst tradition, but essential and elegant scenes illuminated by careful lights (we praise over all Alessandro Verazzi, author of the light design). Set designer Tiziano Santi removes very intelligently glitters and junks typical of bad historical movies, keeping only few symbols: throne, broken walls, a grating, some cases, braziers with lighting fire. Everything is contained in raw, hard and breached walls evocatvely illuminated by wonderful lights, as told.
The stage director has worked specially well on ensembles scenes and on the acting of the singers, with visually beautiful evocative tableaux, recalling famous picture, and for what concernes the lights also to Caravaggio’s paintings. There are some moments less interesting, but globally the only reproach is the excessive use of scenic smokes, expecially in ensemble scenes, always invading the stage and the theatre itself, becoming in the long ran excessive, even if striking.”

Regarding the musical side the conductor Renato Palumbo also in this occasion was on the podium, and we can admire his even excessive zeal but we can’t agree with his scarce refinements, and compared to the 2013 performance this time he seems even more affected to the exteriority and clang than to refined coloristic researches which should be present in Nabucco. On the whole his conducting shows some uncertainties in relations with the stage and a pretty rough vision of this opera which on the contrary contains also great musical pages.

The main character Nabucco was the Greek baritone Dimitri Platanias, very generic both vocally both in the delineation of his character

of men aged 40 and above identified ED as the health issuelike the alpha adrenergic blockers; and yet others like the cialis.

. His voice is pleasant but not very large in volume, he had some just a little more incisive moments but also many others of an irritating flatness
. Overall the baritone doesn’t seem to have the personality for a complex main character as Nabucco.

Susanna Branchini resolves the very difficult part of Abigaille shouting almost every phrase and every note: the rare a little more deepened moments have to reckon with an almost non existent low register, while in the medium one and in upper notes her voice is always forced almost bordering to shout, also with some intonation problems. The vocal writing for Abigaille is really impervious but certainly a reckless oomph which tries to hide a damaged vocality isn’t enough to impersonate a credible character both vocally both on stage.
Riccardo Zanellato was Zaccaria with the authority of a “basso cantante” quite able to sing well, although lacking in incisiveness and (being his voice basically a rather light one) lacking also in “contrast” with the voice of baritone Platanias. Overall Zaccaria was well sung but shortly hieratic and solemn, fatures not well expressed by Mr Zanellato.
Pretty good Anna Malavasi as Fenena, decent Paul Antognetti as Ismaele. The other singers were from an average to an embarrassing level.

We must praise exspecially the Coro del Maggio Musicale Fiorentino well trained by Lorenzo Fratini, which was really excellent in the many pages that Verdi reserves to the chorus. Its performance was really perfect not only in the most famous page of the opera Va, pensiero but starting from the initial scene Gli arredi festivi also in all the others scenes, sung in a really excellent way.

The Orchestra del Maggio Musicale Fiorentino was rather well.

The cheering audience that filled up the House was very warm in applause with all the interpreters, reserving a real triumph to the Choir and to its director Lorenzo Fratini. 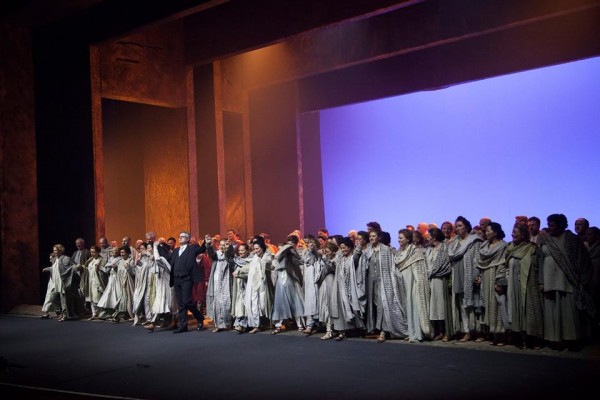 Nabucco. chorus with Lorenzo Fratiini at the curtain call