Now the orchestra are in residence … 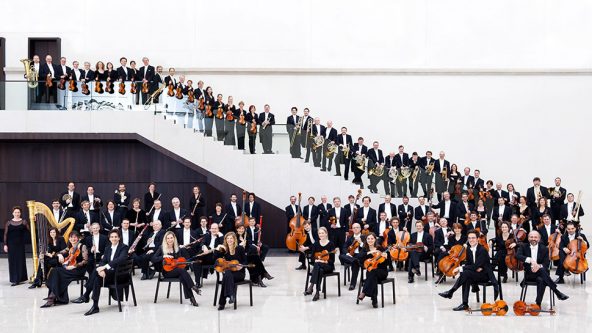 During the intervening period, they have been permanently on tour, and it has been interesting to gauge the level of success with which various venues in Dresden have risen to the challenge of staging classical concerts. Stravinsky’s Petrushka actually chimed in rather well with the works of art on display in the Albertinum, and the fairy-tale Kronensaal in Albrechtsberg Castle proved to be an ideal setting for chamber music. The Frauenkirche, the Schauspielhaus theatre, the Church of the Holy Cross (Kreuzkirche) – splendid landmark buildings and welcoming hosts, but being constantly on the move ultimately gets to be really tiresome.

We look forward to performing in an auditorium that has intimacy, warmth and atmosphere as well as great acoustics.

Michael Sanderling, is the chief conductor of the Dresden Philharmonic

Now all of that is at an end. After lengthy discussions and planning, the Dresden Philharmonic at last has a fabulous new concert hall which, thanks to measurements carried out by Dutch acoustic experts Peutz Consult, has the desired ‘dark’ sound. While the foyer has been restored true to the original, the rehearsal rooms and office accommodation are new.

Naturally: The musicians are particularly delighted with the personal lockers in the changing rooms – at last a place where they can keep their belongings and where things are not in a state of permanent change. Dresden has spent €81 million on the conversion. The city administration takes quiet satisfaction in having brought the project in within budget and without any major delay in construction.

Masters in their own house

Now the Dresden Philharmonic are masters in their own house. “The stage is big enough for orchestras,” says artistic director Martin Bülow, “but not of a size to permit more elaborate stage sets.” However, the 70 evenings each year on which the Philharmonic will make way for musicals, film scores, ballet and pop concerts will still pull in the audiences. “We’ve had enquiries from some star acts, including Die Kastelruther Spatzen, Maite Kelly, Mireille Matthieu, Frank Schöbel, Hans Klok, Max Raabe, Howard Carpendale, Helmut Lotti and Die Prinzen,” says Bülow. Not least because the light-infused monolithic building containing the new concert hall stands on Altmarkt Square – right in the heart of Dresden.

The concert hall opens with a performance of Beethoven’s Ninth Symphony given by the Dresden Philharmonic Orchestra under the baton of chief conductor Michael Sanderling. The programme also features Julia Fischer as the soloist in Mendelssohn’s Violin Concerto and singer Matthias Goerne was soloist in three lieder by Franz Schubert for baritone and orchestra for the occasion. 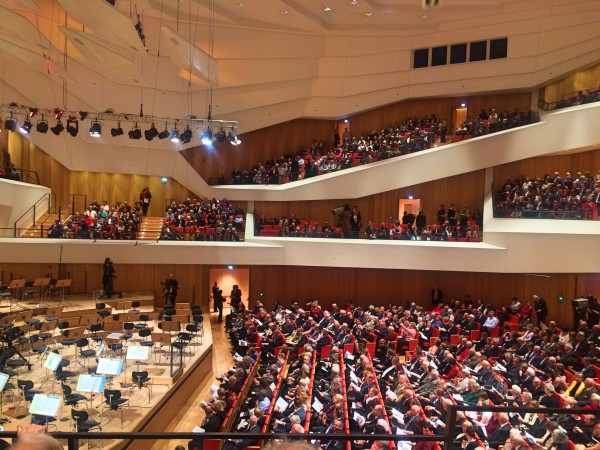 A View of the one side/half of the new concert hall. Foto Tomas Bagackas.

The Kulturpalast was a minorvictory over Big Brother in Moscow
. The Russians wanted a skyscraper tobe constructed there in the style of the Lomonosov University, but after Stalin’s death in 1953, Wolfgang Hänsch managed to get his design approved.

When the Palace of Culture was first opened in 1969 and the Philharmonic settled in after a first period of exile in the German Hygiene Museum, the city also designated it a venue for other civic activities. The classical music makers shared the auditorium with competitions for amateur musicians, with the ‘Pioneers’ of the Ernst Thälmann youth organisation and, after 1989, with the spring folk music festivals. Acoustics were a secondary consideration – of greater importance was the adaptability of the stage and the capacity of the auditorium.

Testament to the socialistic culture that was promoted here after 1969 are the reliefs on the bronze doors, which link Dresden’s history with the workers’ movement, and the large mural ‘Der Weg der roten Fahne’ (The Way of the Red Flag) by Gerhard Bondzin.

An exhibition at the Stadtmuseum Dresden (Local History Museum) tells the story from construction to restoration undertaken by the architects Gerkan, Marg and Partner.
stmd.de 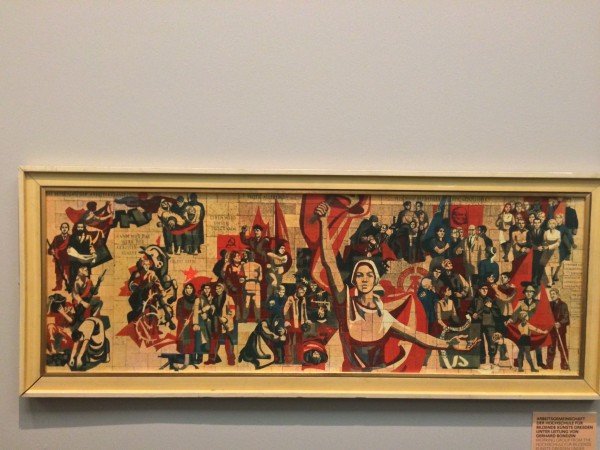 ‘Der Weg der roten Fahne’ (The Way of the Red Flag) by Gerhard Bondzin. Foto By Tomas Bagackas at the exposition in Stadtmuseum.

(Central Library) has been allocated 6,700 square metres of space on the first and second floors of the Kulturpalast and is expecting a footfall of up to 4,000 visitors per day. Deutsche Werkstätten Hellerau fashioned wooden fittings for the Kulturpalast back in 1969, which now enjoy listed status. The furniture makers have once again been called in, this time to design and build seating and play equipment on various themes, including dragons and space stations for the children’s section of the library. bibo-dresden.de
www.visitdresden.de