in the new build Grand Duke of Lithuania´s castle 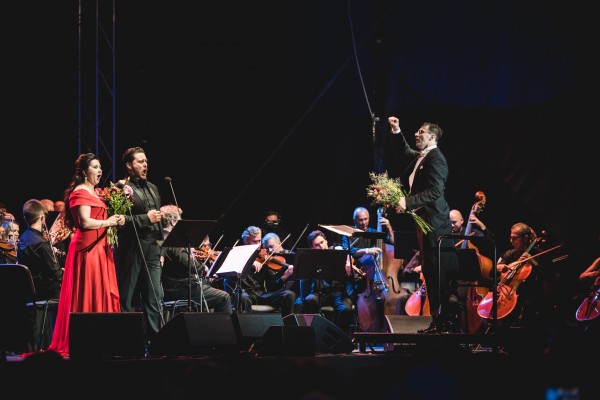 VILNIUS/LITHUANIA: App 1500 people audience (?) enjoyed a wonderful summer evening at The Grand Dukes Palace court yard with 27 Centigrades. With a mixed operaprogram in the popular traditionel style.
The audience was dressed up, TV cameras and press photographers. VIP lounge. It all looked very international. 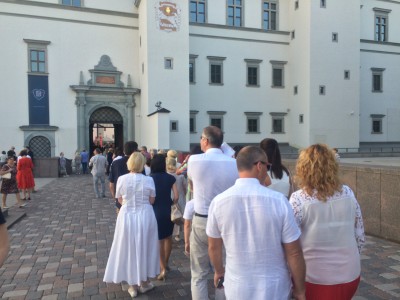 Modestas Pitrenas, who himself conducted the brilliant sounding Lithuanian Chamber Orchestra has put together this evenings program, which for the first part included famouse and well known arias and duets from Giacomo Puccinis most well known operas, La Boheme, Tosca and Madame Butterfly, the three operas who made this composer famous, but also from his other highlights Turandot and Gianni Schicci, and one little not so well known pearl Le Villi.

Only the opening number in the first part was not by Puccini, but we got as ouverture the beautiful Intermezzo from the opera Cavallari Rusticana by his great colleague Pietro Mascagni. An opera where another Lithuanian world famouse opera primadonna, Violeta Urmana has triumphed in as Santuzza at the world stages as at the Opera de Paris, but here the famouse Intermezzo, which was written by Mascagni specially, because he should send in the opera Cavalleria Rusticana to a competition (in 1888) for one acts operas, but since this opera in fact is split in two parts, he needed to bring these two parts together so it became an one act opera, then the Intermezzo was the solution. The Harp did a good job in this part, and the soft sound of the orchestra led by the strings was beautiful.

Then the Giacomo Puccini highlights: Tosca: Visi d’Arte.
Wonderful to hear a good harpist in both these numbers. Lilija Gubaidulina formed this famouse and well known aria very well.
Then Pinkertons aria fra Madama Butterfly was well formed by the tenor Merunas Vitulskis. 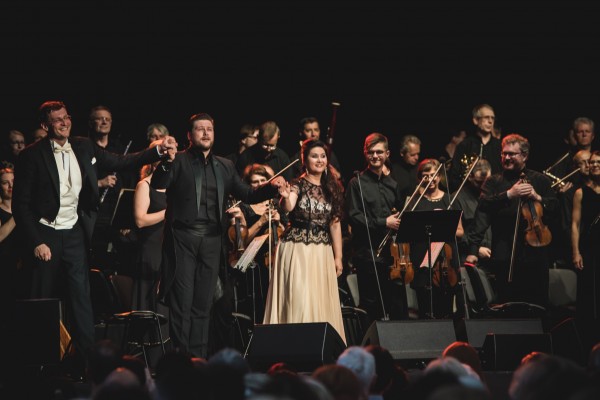 Then after a great spanish inspired orchestra piece from Puccinis Le Villi, we reached the ending of the first part of the concert.

and the first part was ending with the long demanding love duet from the first act between Butterfly and Pinkerton.About that He loves her that she is his for life. She is sad she has lost her family, but is happy in Pinkerton’s arms.

Then time for a break in the beautiful Palace yard. 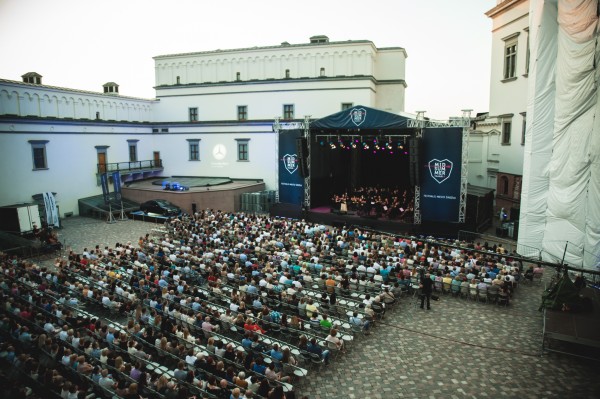 A big success for Midsummer Opera at the Yard of The Grand Duke Castle in Vilnius.

Second part of the concert was presenting famouse operetta music and songs, and we got a good mixture of the most well known operetta arias and duets. Including the famouse aria from Franz Lehárs last operetta Giuditta‘s Scene 4 “Meine Lippen, Sie Kussen So Heiss” (On my lips every kiss is like wine). Because of the temperamentsfull parts between the singing it gives a special high temperature to a concert and the the sopranos lovely voice can sing about the love.

Giuditta, Premiered in January 1934, was Lehár´s last operetta, is generally viewed as his finest, greater even than his most popular, The Merry Widow (1905). Lehár himself was partial to Giuditta, not least because he designed the work from the beginning on a grand scale, attempting to bridge the worlds of opera and operetta. In many respects, he succeeded. 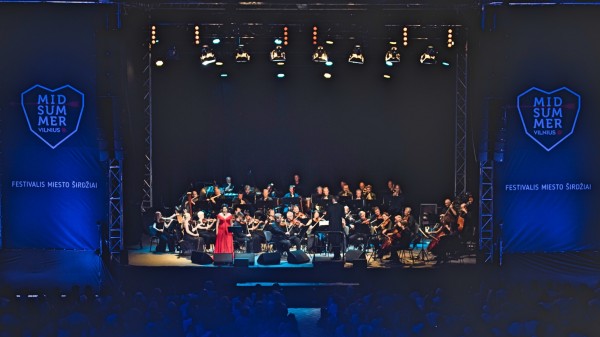 Midsummer Operette, Lilija Gubaidulina in the second part with all the Lithuanian Chamber Orchestra and Modestas Pitrenas

The orchestra played feeling full and temperament full conducted by Modenas Pitrenas, the ouverture from Johan Strauss Die Fledermaus. This famouse operetta premièred on 5 April 1874 at the Theater an der Wien in Vienna and has been part of the regular repertoire ever since. It presents all the leading themes in this operate, and gives a lot of possibilities for the orchestras soloists to do a good job, we very much enjoyed the Obo, Clarinet, Violin and Cello solos. Who underlined how well the enlarged Lithuanian Chamber Orchestra and its soloists are playing
.

An other very popular highlight was the famouse tenor aria Barinkay’s couplets, from Der Zigeunerbaron, with all respect to Merinos Vitulskis who did it very very well, the highlight of the famous Lithuanian tenor Virgilius Noreikas, that I in fact heard first time singing at an opera concert at the Cardinal Square som 18 years ago, that I still remember.

We too got Lehárs Vilja lied from The Merry Widow.

This was followed by the famouse tenor aria “Dein ist mein ganzes Herz”, from Das Land des Lachelns. Also by Franz Lehár. The audience loved it.

Johannes Brahms one of his Hungarian dances.

All ending with the romantic valtz from Merry Widow. With a good cello solo.
Encore: Libiamo from La Traviata 1.act. 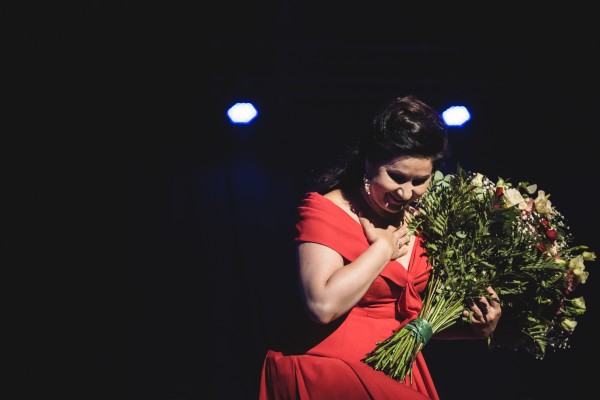 A wonderful well sounding soprano, with absolutely no difficulties in her expression, in the sound, and look on stage, I preferred her red dress for the second part. Only, that just a few times she stopped her high powerful ending tune a second or two too early, but in other pieces she keeps beautifully and long, and it worked very well, specially in the second part, where she, as other singers, has been really warm, and was feeling well. 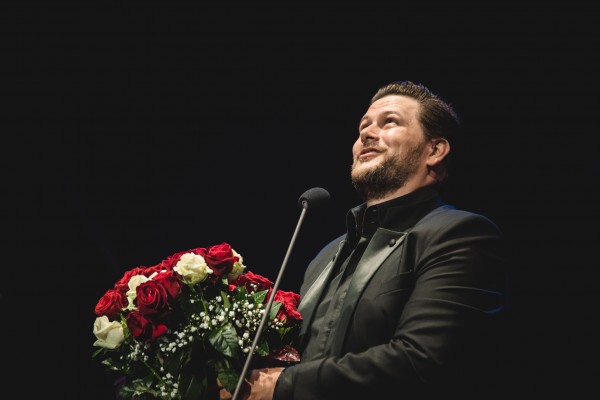 A well sounding beautiful expressive lyric dramatic tenor voice, that reminds me f the great Lithuanian tenor tradition, from where the opera (and operetta) world are having and has had many great names. Because of the microphones i could´t really find out how powerful it is, but it sounded absolutely wonderful. 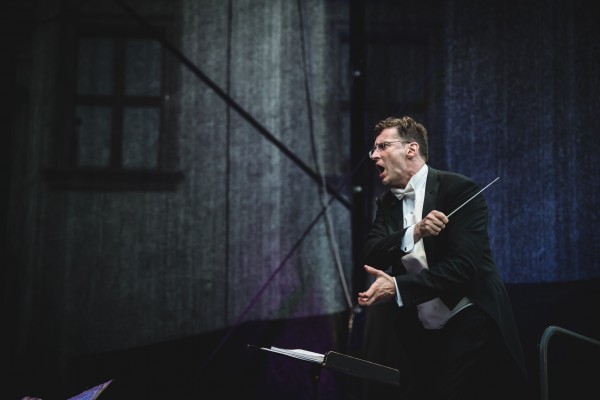 Modestas Piernas in full action. at the Midsummer Opera concert.

For both of the soloists, program planner and conductor Modestas Pitrenas had chosen a line of arias and duets, who functioned very well, and where I had the feeling that they were feeling very well at home, spite in that they had the text and notes with them on stage. His conducting is brilliant, he can listen, and he has the flexibility, to form the program lines first class. 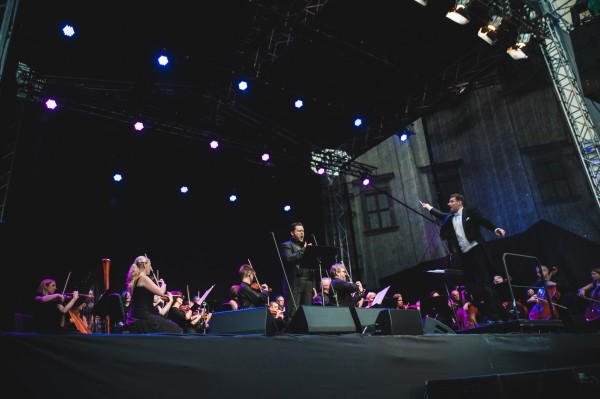 The enlarged Lithuanian Chamber Orchestra did an excellent job, It has a good central core of musicians, each group led by excellent solo players, and a great solo violinist, – unfortunately I don´t have his name. It much be a pleasure for a conductor to work with such a good orchestra, that Lithuania can be proud of.

For later occasions it could be a hit to enlarge the concert with a good choire ( I now it would ínvolve more people and cost more money), but it could be another project, it could even be an opera/operetta concert with famouse choire parts and orchestral ouvertures and intermezzi, of course, together with orchestra. And no singing soloists. he choir tradition in the Baltic countries is so great, involve them.

Honestly I should have preferred that such a concert could have been performed without microphones, as the musically sound is loosing a lot of the qualities in the music, for example the pianissimo is much more beautiful with out microphones and laudspeakers. However, it is also very demanding to perform with loudspeakers on, as you hear all details, that you shall not hear, forexemple in the beginning of second part, where the microphones catch the sound of instructions send to the TV team. However the result was good, and after a while the audience nearly forgotten that the sound system existed. I do hope that the Lithuanian Radio and TV, who as far as i understood was taking this concert, will manage to get it out internationally.

The light design was very good. Following the moods of the musically numbers well, and with great variations.  However I should have wished that the back wall carpet of the stage not has been black, with a lighter color it would have been giving the light designers even more possibilities to play. Furthermore, with such a great and large orchestra I would have preferred that the Percussion line back on stage has been lifted up one step more. It would have been looking even more great. I do know, and could see, that this stage was tiny for such a large orchestra.  – And too that this is probably the stage, that is being used for all the different kind of concerts also with smaller staff on stage. 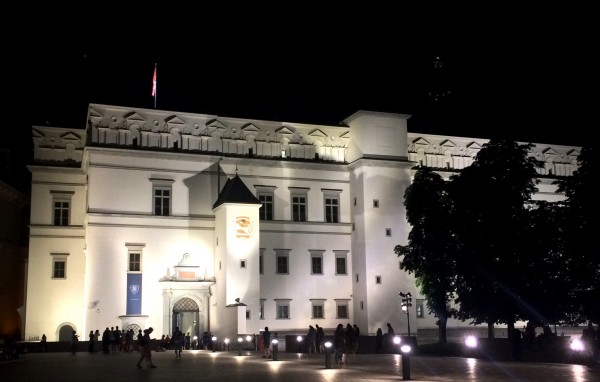 Bravo. We hope this kind of concerts will be a tradition in the beautiful Yard of the Grand Duke of Lithuania.

In the middle of summer, Vilnius will be filled with culture

follow-up include: How long does cialis last? and their partner.

. For the first time residents and guests of the city will be invited to the festival “Midsummer Vilnius”. The performances of a few weeks-long festival will be given not only by the most famous artists of our country, but also by the world-famous stars. The British music legend Joss Stone, arriving to Lithuania, will open the festival, the program of which also includes performances of accordion virtuoso Martynas Levickis, the original cello trio “Melo-M” from neighbouring Latvia and many others. However, these artists constitute only a small part of the festival program, which is claimed to be continuously impressive by the organizers.

“Midsummer Vilnius” is the city festival for those who are looking for a cultural entertainment in the heat of summer sunshine. We were happy to have a possibility to invite a world-class star Joss Stone. Her powerful voice, charming musicality and passion have managed to enslave many music lovers from all over the world, so we believe that it will be a great gift for our guests. In addition, the rest of the festival program will delight with its diversity: visitors are welcome to enjoy performances and concerts, during which unexpected interpretations of classical and popular music will sound,”– says festival manager Valdas Petreikis.