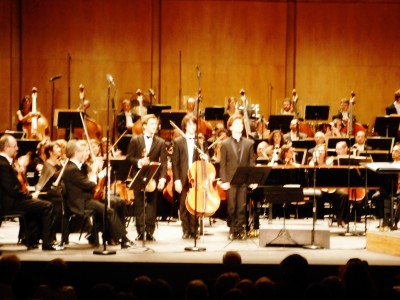 From left; Renaud Capucon, Yann Levionnois and David Kadouch - sorry for the bad quality of the photo - (iphone)

The first hit of the evening was hovever the Trio concerto for piano, David Kadouch, violin, Renaud Capucon, and cello, Yann Levionnois by Ludwig van Beethoven. It was extraordinary, with three good soloists nearly playing chamber music together, and together with the orchestra, like a detailed beautiful embroidery it became a great season opening concert, who also gave the audience the posibility to enjoy three outstanding french soloists at the same time.

The Triple Concerto, was composed in 1803 and later published in 1804 under Breitkopf & Härtel. The choice of the three solo instruments effectively makes this a concerto for piano trio and the only concerto Beethoven ever wrote for more than one solo instrument.

After the break Ein Heldenleben by Richard Strauss followed. This is one of the exiting pictures that Strauss has made so wonderfully, and with this orchestras specially and great sound, it became the second hit of the evening. With wonderful soloviolin passages in the beginning and in the end by the concertmaster Luc Henry. In periodes it is nearly like it could have been a violinconcerto

Erectile dysfunction is often assumed to be a natural How long does cialis take to work? and androgens in general should not be recommended as.

A Hero’s Life is a through-composed, circa fifty-minute work, performed without pauses, except for a dramatic grand pause at the end of the first movement. The movements are titled as follows: “Der Held” (The Hero)
. “Des Helden Widersacher” (The Hero’s Adversaries). “Des Helden Gefährtin” (The Hero’s Companion). – The movement features a tender melody wonderful played by the 1 solo violinist Luc Henry. The extended accompanied cadenza was filled with extreme details, the violin presents new motivic material, alternating with brief interjections in low strings, winds, and brass. During this section, the violin briefly foreshadows a theme which will appear fully later. The cadenza concludes and the new thematic material is combined in a cantabile episode commencing in G flat. Fragments of the motives from the previous movement briefly appear. This part was one of the highlights in the Richard Strauss part.

Then A fanfare motive in offstage trumpets, repeated onstage, is then heard. These three initial sections comprise an elaborate exposition, with elements of a multiple-movement symphony evident in their contrasting character and tempo. The remainder of the work comprised development, recapitulation, and coda, with occasional new thematic material. “Des Helden Walstatt” (The Hero at Battle). “Des Helden Friedenswerke” (The Hero’s Works of Peace). “Des Helden Weltflucht und Vollendung” (The Hero’s Retirement from this World and Consummation). Inclusive the theme foreshadowed during the violin cadenza.